Blue Origin tested the in-flight abort system for the New Shepard capsule, on 05 October 2016, at the West Texas Suborbital Launch Site. About 45 seconds after liftoff, at about 4876 meters (16000 feet), Blue Origin intentionally triggered an escape in flight and at the most stressing condition: maximum dynamic pressure through transonic velocities. The reusable New Shepard booster, already flown four times, was recovered, landing for the fifth time. 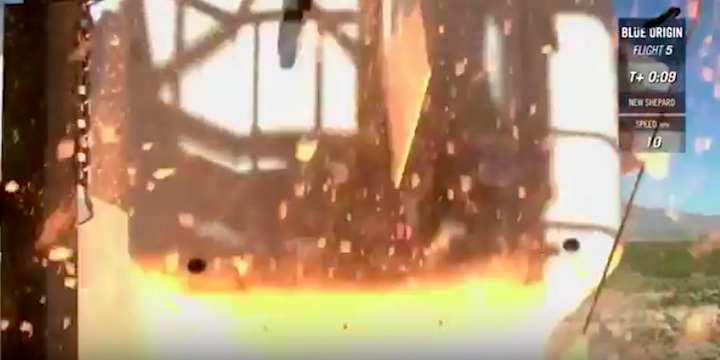 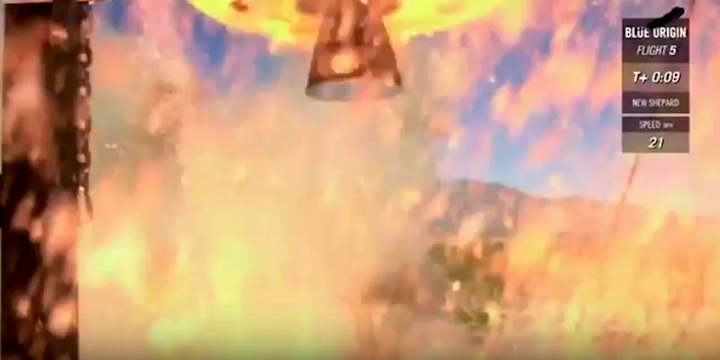 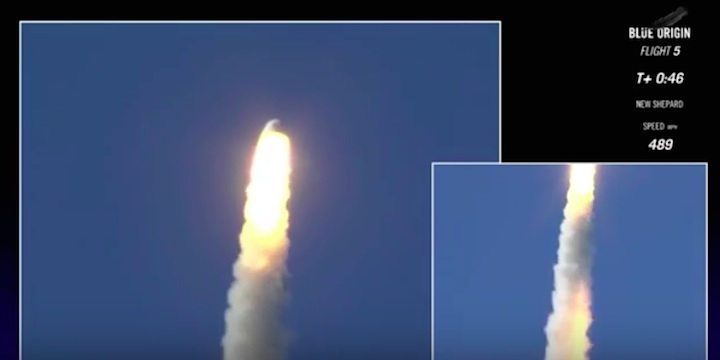 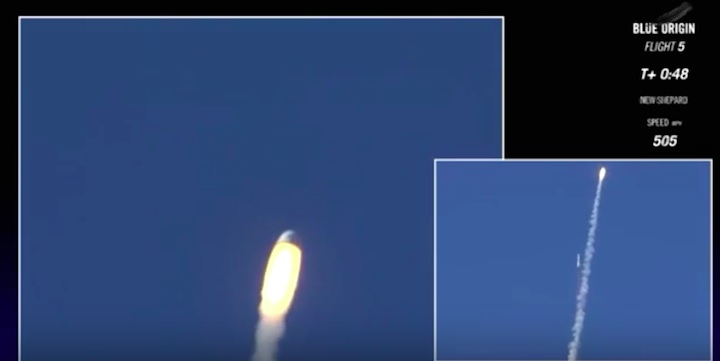 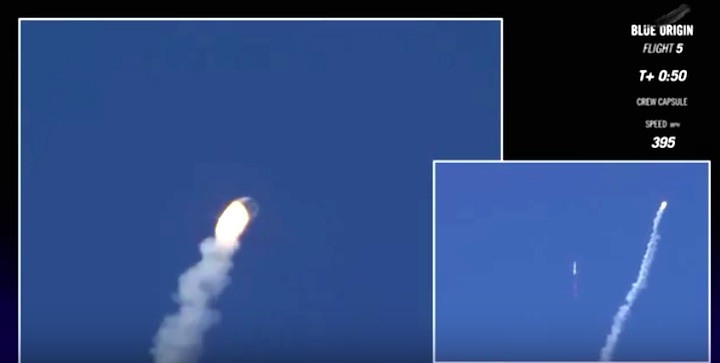 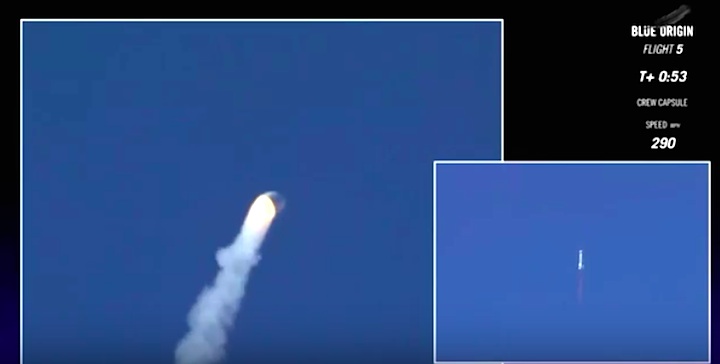 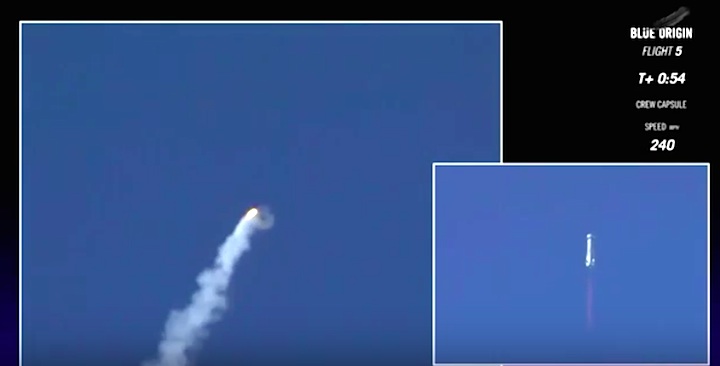 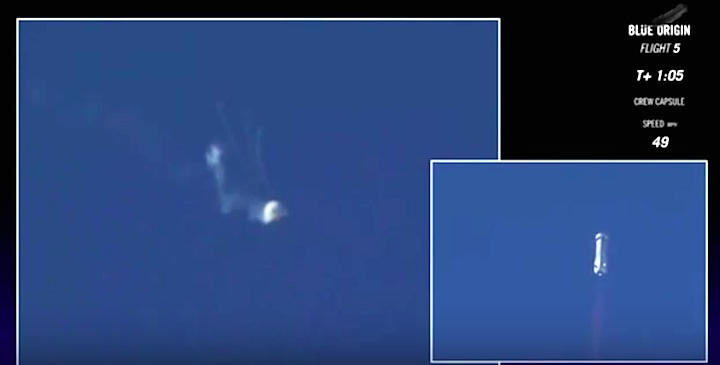 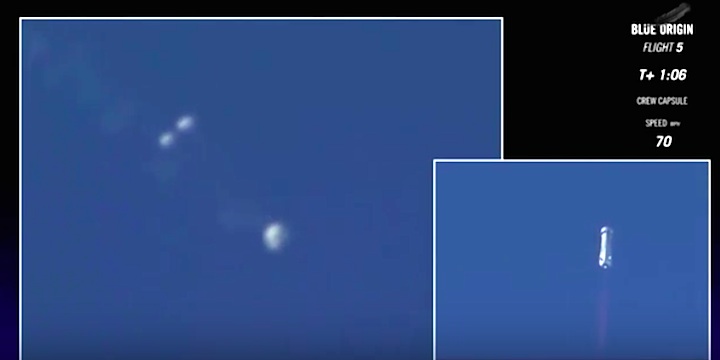 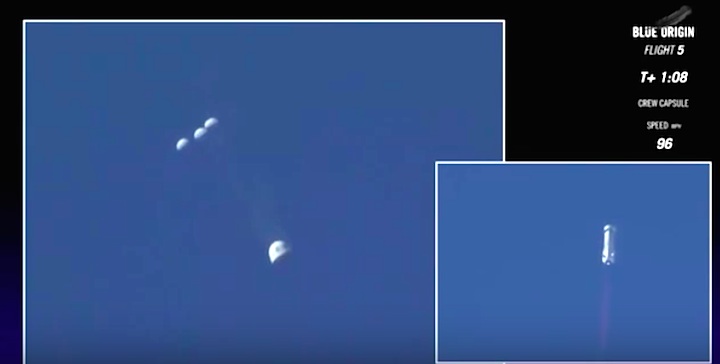 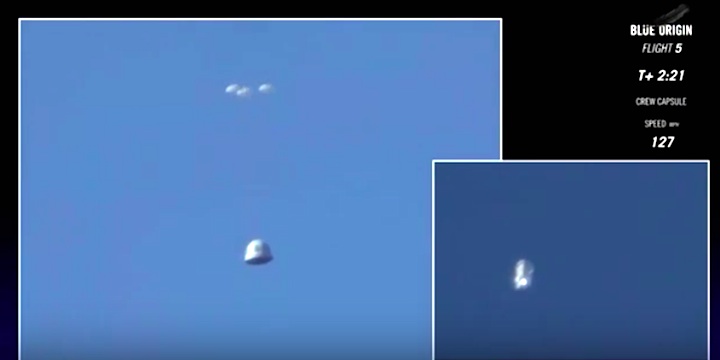 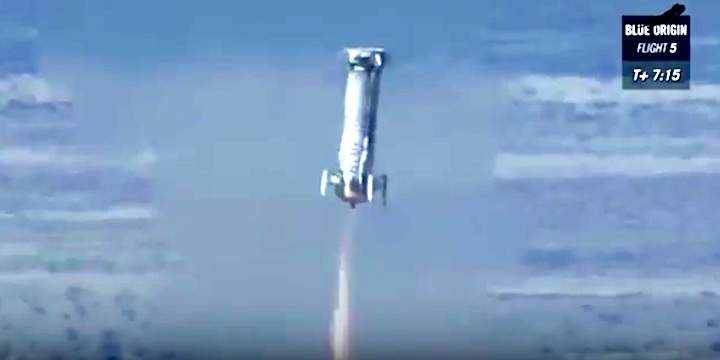 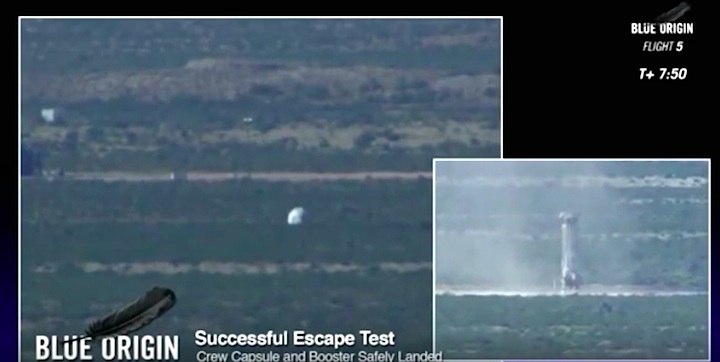 Jeff Bezos' company hopes to launch fee-paying passengers into suborbital space by 2018 and Wednesday's successful launch abort test is a huge step in that direction. 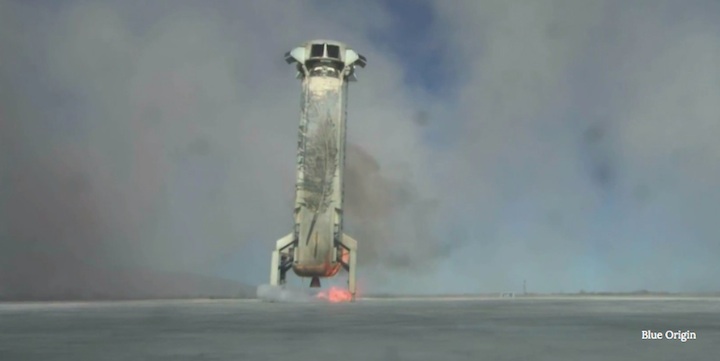 Surprisingly, Blue Origin's suborbital New Shepard rocket returned intact from an inflight abort test intended to demonstrate how passengers would fly to safety in case their launch vehicle was having a bad day.

The rocket, carrying a prototype passenger capsule, lifted off its West Texas launch pad at 11:37 a.m. EDT. About 45 seconds later, the capsule separated from the booster and ignited its own solid-rocket motor to fly away. The test is intended to demonstrate how the capsule, which is designed to carry six passengers, could survive a launch accident.

Computer simulations indicated the rocket, which has made four previous flights, likely would tip over, shut down and crash in the desert.

Instead, as the capsule deployed parachutes for a ride back to the ground, the rocket continued on its path toward space.

Seven minutes later, its BE-3 engine kicked on, its landing legs deployed and the scorched looking booster touched down.

"There you go New Shepard. Look at her!" mission commentator Ariane Cornell said as the booster touched down.

Both the capsule and the booster will be retired, she added.

Blue Origin, owned by Amazon.com founder Jeff Bezos, is in the process of assembling two more New Shepard vehicles, which will have capsules with large windows.

The Kent, Washington-based company hopes to begin test flights with its own pilots and engineers aboard next year and then begin commercial service in 2018.

The capsules are designed to fly six passengers (and no pilots) to an altitude of more than 62 miles above Earth so they can experience a few minutes of weightlessness and see the planet set against the blackness of space.

Blue Origin has not yet started selling tickets for flights.

Not only did the crew capsule safely eject itself off of the New Shepard rocket, but the booster itself survived the maneuver, against all odds and expectations. NS2 managed to right itself after the escape, continue to travel all the way up into space, and descend back to Earth for a soft and upright landing.

The goal was only to recover the capsule and provide a gentle landing for its would-be astronauts, although crewed tests have yet to begin. On that measure, this test was a great success. If humans had been inside, they would have been in for a wild but ultimately safe ride up, and back down.

The escape system isn’t designed to be deployed except in cases where something goes wrong with the rocket, and so booster recovery isn’t part of the plan. When the capsule blasts off from the booster, it messes with the aerodynamics, and the Blue Origin team wasn’t at all sure the rocket would make it back in one piece after today’s test.

This was the final flight for history-making rocket NS2, which on November 23, 2015, became the first rocket to land in one piece after blasting to space, 100 kilometers up. It has since repeated the feat an additional five times, including today, proving beyond doubt the reusability of the system.

You can bet Bezos and the Blue Origin team are thrilled to have NS2 back on the ground safely, although both the rocket and the crew capsule won’t see space again. “We’d really like to retire it after this test and put it in a museum,” wrote Bezos in a blog post ahead of the launch.

This crew escape system is different from what has come before, on Mercury, Apollo, and Soyuz. Those systems had rockets that pulled the capsule like a tractor, and the escape system comprised a tower and motor between the rocket and the crew capsule that had to be jettisoned in every flight, emergency or not.

Blue Origin’s system has the crew capsule sit on top of the rocket, and to escape it fires its own rocket engine to quickly get away. The system is like an airbag — it can only be used once, but doesn’t need to be rebuilt after each launch if all goes according to plan.

And, if today’s launch is any indication, Blue Origin’s plans are moving along rather smoothly.