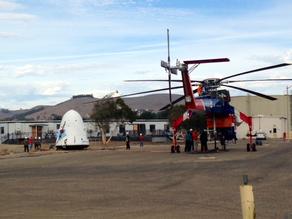 As if the skies themselves haven't been spectacular enough the last day or so, anyone looking upward in Morro Bay today saw quite a show: an Erickson Air Crane carrying a spacecraft out over the bay to the Pacific.
As part of NASA's Commercial Crew Program, Space X and NASA are working together to modify Space-X's Dragon spacecraft for human space flight. They were hoping to test how the spacecraft's parachutes deploy and how the spacecraft lands today, but ended up bringing the module back to the Dynegy plant for another attempt later in the day or tomorrow. Similar tests were conducted in Morro Bay back in August of 2010.
The Dragon spacecraft being carried over Morro Bay today is currently delivering cargo to and from the International Space Station for NASA. The tests being conducted will help NASA and Space X make any modifications necessary to have the Dragon start fliying astronauts and other crew members as early as 2015.
Space X says Morro Bay is an ideal location for this type of test and the support of the community makes it even better. The testing process is happening out of the Dynegy power plant with the support of the Morro Bay Police Department, Morro Bay Fire, the U.S. Coast Guard, the FAA and the Morro Bay Planning Department.
Quelle: ksby
.
Rückblick auf Test von August 2010
Frams: SpaceX-Video
.