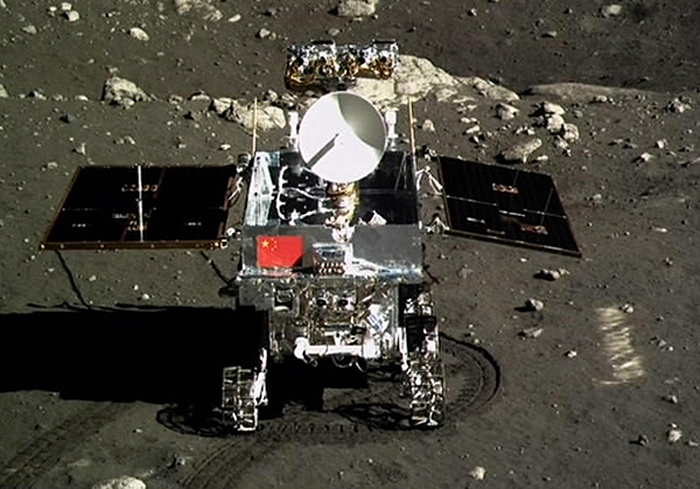 China’s ambitious lunar space exploration program achieved another stunning success Sunday night, Dec 15, when the countries inaugural Chang’e-3 lunar lander and rover beamed back portraits of one another snapped from the Moon’s surface – that also proudly displayed the brilliant red Chinese national flag shining atop an extraterrestrial body for the very first time in human history.
“I announce the complete success of the Chang’e-3 mission,” said Ma Xingrui, chief commander of China’s lunar program, during a live CCTV broadcast as the portraits were shown to a worldwide audience from huge screens mounted at the mission control at the Beijing Aerospace Control Center (BACC) in Beijing.
Chinese President Xi Jinping was on hand to personally witness the momentous events in real time.
A wave of cheers and high fives rocked around mission control as the startling imagery of the ‘Yutu’ rover and Chang’e-3 lander nestled atop the Moon’s soil in the Bay of Rainbows was received around 11:42 p.m. Sunday, local Beijing time, 10:42 a.m. EST, via China’s own deep space tracking network.
Xi Jinping’s presence was a clear demonstration of China’s confidence in its lunar team and the importance of this space spectacular to China’s prestige and technological prowess.
China thus became only the 3rd country in the world to successfully soft land a spacecraft on Earth’s nearest neighbor after the United States and the Soviet Union.
China’s ‘Yutu’ rover had just rolled majestically onto the Moon’s soil hours earlier on Sunday, Dec. 15, at 4:35 a.m. Beijing local time – barely seven hours after the Chang’e-3 mothership touched down atop the lava filled plains of the Bay of Rainbows on Dec. 14.
The rover’s wheels left behind noticeable tire tracks as it drove across the loose lunar topsoil.
Read my earlier detailed accounts of the Dec. 15 drive by Yutu onto the lunar surface illustrated with an extensive photo gallery – here; and of the stunning Dec. 14 landing – here.
CCTV showed China’s President gleefully shaking hands and extending congratulations with many members of the mission team at BACC after seeing the high resolution photos of the Chang’e-3 rover emblazoned with China’s flag for himself.
. 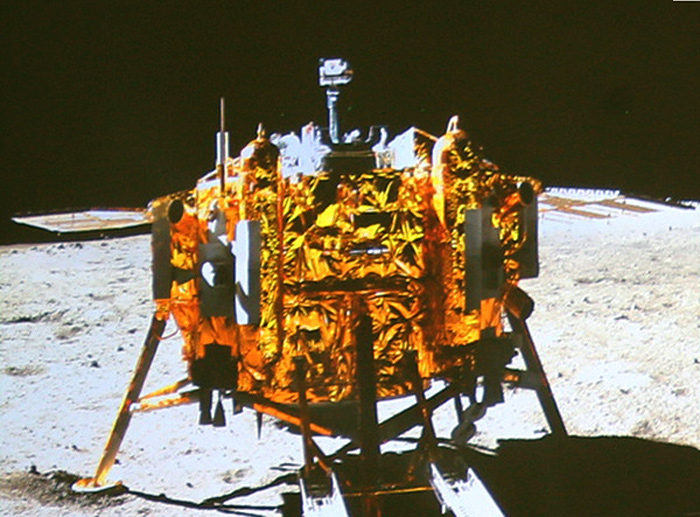