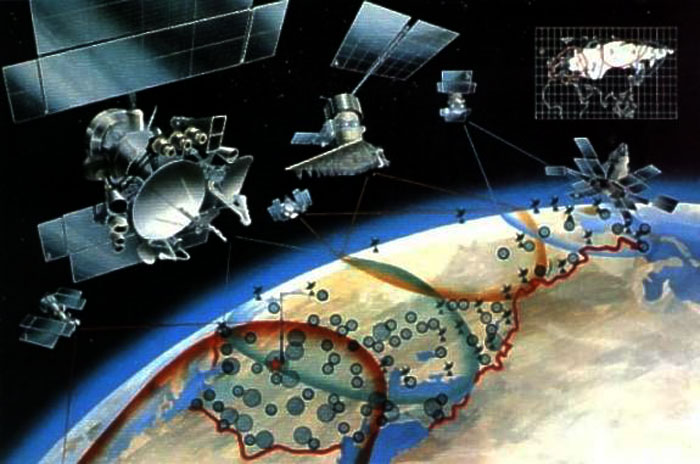 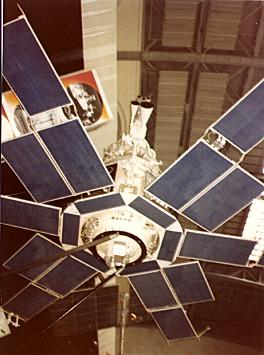 Russian communications satellite. 55 launches, 1974.11.21 (Molniya 3-01) to 2003.06.19 (Molniya 3-53). Development of the Molniya-2M communications satellite, later called Molniya-3, began in 1972. Flight trials began in November 1974.
The Molniya-3 group of four satellites was used to create the Orbita communications system for northern regions of the Soviet Union. The land segment used a 12 m diameter parabolic antenna, pointed automatically at the satellite using autonomous electromechanical equipment. Although primarily for civilian applications, later versions were part of the Soviet YeSSS Unified Satellite Communications System. Trials of this version began in the 1980's, with the system being accepted by the military in 1983-1985.
Molniya-3 used the Segment-3 three-channel repeater (cm-band, 4-6 GHZ). The Molniya 3 spacecraft supported civil communications (domestic and international) while Molniya-1T were used almost exclusively for military communications. Compared to Molniya-1T they had a slightly enhanced electrical power system and a communications payload of three 6/4 GHz transponders with power outputs of 40 W or 80 W. Molniya 3 spacecraft only originated from Plesetsk.
Until 1983 the Molniya 3 constellation consisted of only four satellites, which were essentially co-located with four Molniya 1 satellites. When the Molniya 3 system was expanded to eight vehicles as part of the military's YeSSS system in 1983-1985, the new additions inaugurated the 155 degrees E ascending node geometry. After the restructuring of the Molniya-1T constellations in 1991, the Molniya 1 and 3 systems were essentially the same from a deployment perspective and to some extent provided an inherent backup capability. On the average Molniya-3 spacecraft were replaced slightly less frequently than their Molniya 1 cousins, representing either an extra 5 to 6 months of operational life, or a more casual attitude to having redundant civilian as opposed to military capability.
AKA: Molniya-2M; 11F637.
Gross mass: 1,600 kg (3,500 lb).
Height: 4.40 m (14.40 ft).
Span: 8.20 m (26.90 ft).
First Launch: 1974.11.21.
Last Launch: 2003.06.19.
Number: 55 .
Quelle: Interfax
.
Update: 16.12.2013
.
Soviet Oko satellite may fall on Earth on December 18
MOSCOW. An old Soviet satellite, a part of the OKO system, which was a space echelon of the missile attack warning system, may fall to Earth on December 18, the information analysis center of the Interstate Joint-Stock Corporation (MAK) Vympel (part of the concern PVO Almaz-Antei) told Interfax-AVN on Monday.
"A satellite of the Oko system is expected to fall around December 18, the day after tomorrow. It was launched in the USSR and was intended to detect ballistic missile launches. This satellite has not been working for a long time and is going down from an orbit on which Molniya-type satellites worked," the source said.
Quelle: INTERFAX
.
Update: 22.12.2013
.

MOSCOW. Dec 22 Updated reports say the Kosmos-2393 satellite integrated in the Oko system, the space component of Russia's early warning system ceased to exist last night, Interfax-AVN was told at the Vympel interstate joint-stock company, which is part of the Almaz-Antei air defense corporation on Sunday.

"According to updated reports of Vympel, the satellite ceased to exist at 1:26 a.m. After entering the atmosphere it started disintegrating, " a spokesperson said.