The University of Arizona has played a role in imaging and mapping most major objects in the solar system. Now, it adds the asteroid Bennu to the list. The Bennu Global Mosaic, as the complete map of the asteroid is called, is the highest resolution map of any celestial body. 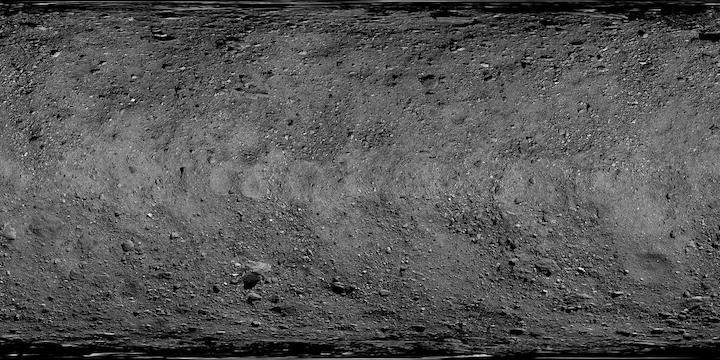 As NASA's OSIRIS-REx spacecraft prepares to briefly touch down and collect a sample from the asteroid Bennu in October, the mission's science team, led by the University of Arizona, has worked meticulously to create the highest resolution global map of any planetary body, including Earth. The endeavor is the latest in the university's long history of celestial imaging and mapping – one that began with the first lunar landings.

The team stitched together 2,155 images – containing pixels that translate to two square inches on the surface – to create the Bennu Global Mosaic.

"This is the finest spatial scale we've ever mapped of a planetary object," said Daniella DellaGiustina, OSIRIS-REx image processing lead scientist. "It's also unprecedented in the way we used it. Typically, when NASA chooses a landing site for an upcoming mission, they have an orbiter doing reconnaissance of the surface long before a separate mission contacts the surface. But we went to Bennu without that luxury. This paradigm of doing every step in close succession is unique and made things demanding."

The spacecraft collected the images at distances ranging from 2.2 to 2.9 miles above the asteroid's surface between March 21 and April 11, 2019. The mosaic was completed in February.

The detailed view of Bennu was used by the mission team during its selection of the primary and backup sample collection sites, dubbed Nightingale and Osprey, respectively.

The full-sized version of the mosaic has been downloaded over 52,810 times since it was released in February.

There are a couple of important criteria that a useful map of Bennu's surface needed to meet.

"It needed to contain minimal distortion and good lighting to get sense for texture and relief across surface," DellaGiustina said.

Carina Bennett was up for the task. She has a background in photography, film and art, having earned a Bachelor of Arts in media arts and creative writing from UArizona and a Master of Arts in film and video production from the University of Iowa. She worked as a videographer in University Communications at UArizona nearly 10 years ago while simultaneously enrolled in computer science courses. Her computer science degree and the connections she forged while working for the university brought her to her first job on the OSIRIS-REx mission. She is now a senior engineer on the mission's image processing team.

To create the Bennu Global Mosaic, the team first had to capture images of the surface using the PolyCam instrument.

The spacecraft snapped photos from three predetermined orbital angles – in the northern hemisphere, at the equator and in the southern hemisphere – that made sure there were clear views of the entire asteroid surface and optimized the shadows of Bennu's features. While maps typically want to eliminate shadows, they were needed in this case to make the surface features pop.

"We wanted a little shadow, but not too much and not weird angles. It was all just very meticulously planned," Bennett said.

Then, using a 3D model of the asteroid that was created using a program that inferred the shape based on multiple photo angles, Bennett and her team overlaid the images.

"We took a few images and manually matched them to sites scattered across the 3D shape model," she said. "If they're not lined up perfectly, they seem to wiggle when we toggled between the two. We carefully nudged the photos into place until we got a perfect match. Then, to lay the rest of the images, we used computer algorithms, which automatically matched surface features."

This is where Bennett's photography and graphic design background came in.

"One thing I can't do is use Photoshop. If we were to do that, it would compromise the scientific integrity. People get scientific information from brightness of the pixels, for example, so we don't want to smudge away the science," Bennett said. "Instead, I had to carefully choose where to divide the images. I cut through things like shadows or along crater rims instead of down the middle of a rock that was imaged from two different viewing angles. By carefully tracing the topography and matching images together like puzzle pieces, I was able to make the map a lot more seamless."

The final global mosaic can serve as a base map to give context to future scientific data.

"When scientists collect spectral (light) data reflected and emitted from Bennu to determine its composition, it just looks like squiggly lines and latitude and longitude coordinates," Bennett said. "So being able to then look at the corresponding location and features on the map is extremely helpful in interpreting that data."

"This can provide data to unlock what kind of global patterns exist on Bennu and provide context to other datasets," she said.

The global mosaic was also used for a citizen science project where anyone with an internet connection could map and measure Bennu's boulders, which will contribute to a global boulder census.

Future mosaics, which will focus on smaller portions of the asteroid and be higher resolution, will be used for navigation of the primary and secondary sample sites.

"The University of Arizona has extensive history of imaging other objects in the solar system," DellaGiustina said. "All that heritage was brought to bear when we designed the cameras for the OSIRIS-REx mission."

When President John F. Kennedy announced in 1961 that Americans would walk on the moon by the end of the 1960s, a small group of UArizona researchers was among the few already studying the moon professionally.

The team members imaged and mapped the lunar surface, which allowed them to understand the moon's geology and allowed NASA to choose landing sites for future robotic and Apollo missions. Gerard Kuiper, the father of modern-day planetary science, led the team and established the Lunar and Planetary Laboratory at UArizona, where he served as department head.

Since then, UArizona has played prominent roles in NASA missions that mapped objects across the solar system. The Pioneer missions of the 70s mapped Jupiter and Saturn, the Voyager probes a few years later took the only close-up images of Neptune and Uranus, and the Cassini spacecraft snapped photos of Saturn while the Huygens probe captured images of the moon Titan.

The university also leads the High-Resolution Imaging Science Experiment, or HiRISE, which captures stunning photos of the Martian surface from onboard NASA's Mars Reconnaissance Orbiter.

The cameras onboard the UArizona-led OSIRIS-REx mission were developed at the university. The PolyCam instrument used to capture the images for the mosaic has an adjustable focus, capable of imaging Bennu from millions of miles away to less than a mile from its surface.

"Because of our long history of developing spaceflight payloads and cameras, we've also gotten good and developing software to process all of those images," DellaGiustina said. "For Bennu, in particular, we worked on establishing – in collaboration with Astrogeology Science Center, USGS (U.S. Geological Survey) in Flagstaff – a suite of image processing software able to handle irregularly shaped objects and translate them into maps. Maps usually project spherical objects, but Bennu was a unique challenge because it's diamond shaped."

The team effort included the work of about a dozen people who helped tie images to each other and to the model of the asteroid, and around 10 people who helped plan the image data collection and send commands to the cameras onboard OSIRIS-REx.

"We still have a lot of work to do," Bennett said. "We're planning on sampling in October of this year, so much of our work now is making sure we're prepared."

Quelle: University of Arizona
Astronomie - Mapping the Solar System: From the Moon to Bennu
169 Views
Created with page4