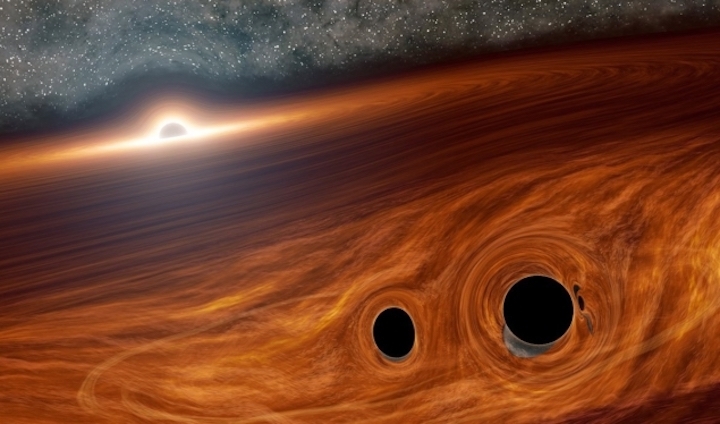 A recent electromagnetic signal from a distant quasar could have been created by merging black holes, according to an international team of astronomers led by Matthew Graham at the California Institute of Technology. The researchers made the connection after modelling the aftermath of such a merger in an active galactic nucleus (AGN) and their calculations predict a second related flare from the quasar in the future.

Over the past several years, the LIGO–Virgo observatories have detected gravitational waves from merging black holes. So far, these observations have largely originated from ancient clusters of stellar remnants and no electromagnetic signals from the mergers have been observed. However, Graham’s team believe that electromagnetic signals could be generated when black-hole mergers occur in AGNs including quasars. An AGN is the central core of a galaxy and contains a supermassive black hole that is surrounded by hot, gas-filled accretion discs. AGNs are thought to have dense populations of black holes.

When two black holes merge, they create a black hole and the team’s models suggest that this black hole would shoot off at a high velocity through the accretion disc, leaving behind a hot, glowing shockwave. This would briefly increase the brightness of the quasar, until the new black hole eventually left the accretion disc.

To find evidence for such an event, they searched for any coincidence between gravitational wave measurements made by LIGO/Virgo, and archival data from the Zwicky Transient Facility(ZTF) in California – which searches for objects that rapidly change in brightness at visible wavelengths. Graham’s team found that a possible gravitational-wave signal (dubbed S190521g) spotted by LIGO–Virgo in May 2019 was followed 35 days later by a bright flare from a distant quasar. Such a delay would be consistent with their predictions because light travelling to Earth would be slowed down within the quasar’s opaque accretion disk.

If the team’s calculations are correct, it would mean that a pair of black holes, with a combined mass of around 150 times that of the Sun, merged within this quasar’s disc. The resulting body would have then been kicked away from the disk at high velocity, creating a strong electromagnetic signal.

Graham and colleagues calculate that the black hole would have then orbited the disk for about 1.6 years before plunging back in to be swallowed by the central supermassive black hole. This, they say, would create a second bright shockwave, which should soon be picked up by the ZTF. The team is monitoring ZTF observations closely for signs of a second flare. If it is spotted, it will give them a high degree of confidence that their model is correct.

Astronomie - Did a black-hole merger create a flash in a distant quasar?
252 Views
Created with page4