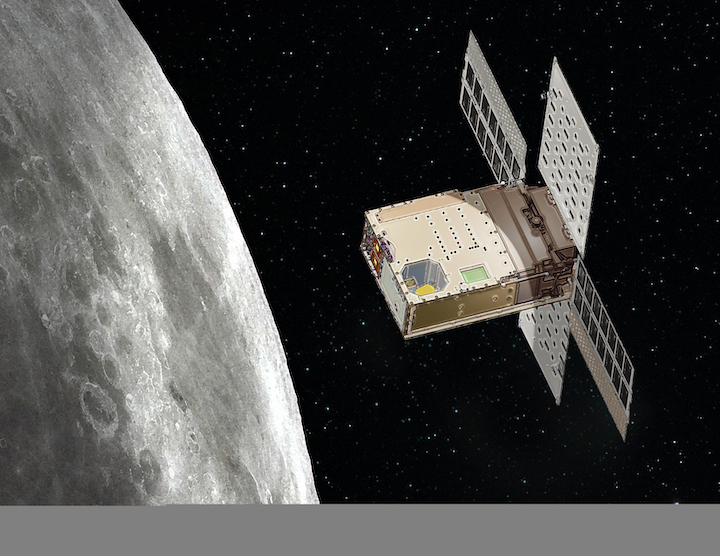 They might be small, but they’re also mighty. Very small and innovative spacecraft called CubeSats are poised to play a role in NASA’s Artemis program, which will return humans to the Moon by 2024.

“A number of things have coalesced to create what is termed the SmallSat and CubeSat revolution,” says Christopher Baker, Small Spacecraft Technology program executive within NASA’s Space Technology Mission Directorate. “Part of it has been the availability of commercial, off-the-shelf components that have incredible processing power, are very small and function on low electrical power.”

CubeSats also offer frequent, flexible, low-cost access to space, while the schedule from conception to launch of these diminutive spacecraft can be fast-paced. They allow you to do things that previously would not have been possible with a large, monolithic spacecraft, Baker observes.

“In the case of lunar exploration, CubeSats are proving themselves to be increasingly capable platforms to precede human explorers on the Moon and Mars,” Baker points out.

One precursor mission is Lunar Flashlight, a very small 6-unit satellite (12 by 24 by 36 centimeters) developed by NASA’s Jet Propulsion Laboratory in Pasadena, California, and NASA’s Marshall Space Flight Center in Huntsville, Alabama. The measurements, led by NASA’s Goddard Space Flight Center in Greenbelt, Maryland, will locate ice deposits in the Moon’s permanently shadowed craters—called cold traps—and estimate the size and composition of those possible frozen reservoirs. The CubeSat uses an optical receiver aligned with four lasers that sequentially pulse the lunar landscape to look for water ice and other volatiles associated with lunar cold traps.

By mapping the lunar South Pole, the same region where NASA plans to land Artemis astronauts, data collected by Lunar Flashlight will help inform and target future missions. Furthermore, knowing the concentration of water-ice in cold traps could influence where to set up a lunar base since the water can be mined and processed to churn out Moon-made rocket fuel and drinking water.

“There’s still a lot of work that needs to be done to establish a long-term, sustainable human presence on the Moon. To achieve that vision, we need to use the resources that are available in-situ to the greatest extent practical,” Baker says. “How much ice is within the permanently shadowed regions, what is its composition, and how deep does it go? We’ve started to understand these things with different orbital instruments and now we need to find out more about what’s there.”

To achieve this, more knowledge on lunar ice is sought from missions like Lunar Flashlight as well as rover prospecting missions.

While Lunar Flashlight will help identify surface ice/frost in the permanently shadowed regions, other missions will need to determine the depth of any deposits below. Snagging that data could be done by a rover or another satellite equipped with ground penetrating radar.

Another pathfinder project representing a rapid lunar flight demonstration is the Cislunar Autonomous Positioning System Technology Operations and Navigation Experiment. Tagged as CAPSTONE for short, this low-cost CubeSat is about the size of a small microwave oven. Two small businesses will help make the vanguard mission possible. Advanced Space will develop and operate CAPSTONE and Tyvak Nano-Satellite Systems will build the CubeSat platform.

CAPSTONE will demonstrate many firsts, starting with its launch from Earth aboard a Rocket Lab Electron rocket in early 2021. The company’s Photon platform will give CAPSTONE a boost, putting the CubeSat on its trajectory to cislunar space.

CAPSTONE is to be positioned in the same lunar orbit targeted for Gateway—the lunar outpost astronauts will visit before descending to the surface of the Moon in a landing system as part of the Artemis program.

Operating in what’s called a near rectilinear halo orbit, a highly elliptical orbit over the Moon’s poles, CAPSTONE will rotate together with the Moon as it orbits Earth and will pass as close as 1,000 miles and as far as 43,500 miles from the lunar surface.

As the inaugural mission to this unique cislunar orbit, which is managed by NASA’s Ames Research Center in California’s Silicon Valley, CAPSTONE will demonstrate how to enter into and function in this special orbit as well as test a new navigation capability.

An additional CAPSTONE task is use of an onboard communications system capable of determining how far the CubeSat is from NASA’s Lunar Reconnaissance Orbiter and how fast the distance between the two is changing. This software demonstration of spacecraft-to-spacecraft navigation could allow future missions to pinpoint their place in space without having to rely exclusively on tracking from Earth

“We’re hoping to see a proliferation of these small missions. Not all of them are going to be able to talk at once with our Deep Space Network,” Baker explains. NASA’s Deep Space Network is a powerful system of large radio dishes for commanding, tracking and monitoring the health and safety of spacecraft at many distant planetary locales.

Looking to the near-term future of CubeSats, Baker comments that they are at their best when they are being used for targeted objectives. That said, however, CubeSats can also work together in distributed missions, or swarms. You can have multiple CubeSats operating in the same or compatible orbits then later synthesize the data collected by the individual spacecraft

Baker envisions an expanding role for small, economical missions. He sees their utility as a quick reaction tool, so when an unknown comes up, researchers can immediately and responsively target a mission to gather that data

“From a small spacecraft technology perspective, one of the things that I really like doing is finding the mission that someone says can’t be done…then trying to figure out how to do it,” Baker says. “Frankly, given the pace of the small spacecraft community, our academic and industry partners, there may well be an underestimation of what we can accomplish in the next five years.”