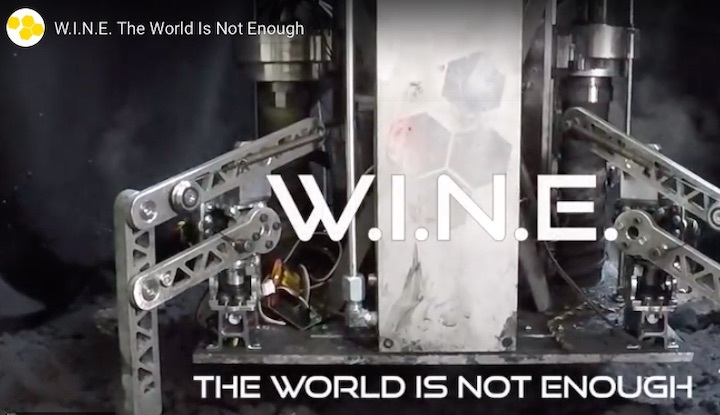 A prototype spacecraft capable of “hopping” from one asteroid to another effectively transforms water into steam, Embry-Riddle student-researchers have reported.

Rukhaiyar, with other students and faculty members, presented the research at a recent conference of the American Institute of Aeronautics and Astronautics (AIAA).

The Embry-Riddle propulsion system was developed for Honeybee Robotics, with support from NASA, Jay D’Amico of the Louisiana Steam Equipment Company and the university’s Undergraduate Research Office. The team also collaborated with Dr. Phil Metzger, a planetary scientist at the University of Central Florida and the principal investigator for the overall project.

“Honeybee Robotics made a prototype spacecraft, using our propulsion system, that works well in a vacuum on Earth, suggesting it would work in the vacuum of space, too,” Rukhaiyar explained. “Our analysis shows that the propulsion system would offer more than enough pressure, heat and thrust to convert water into steam and lift the spacecraft.”

Here’s how the technology works, according to Honeybee Robotics’ newly released video:

After landing on an asteroid or other object, the spacecraft uses a pair of drills to bore into regolith – the mineral-enriched rocky soil that blankets the Moon, Mars and some asteroids. The insulated coring bits, equipped with heaters, trigger regolith to release water vapor, which freezes inside a special cold trap. Reheating the frozen material transforms it into high-pressure steam that serves as renewable rocket fuel. Frog-like robotic legs allow the spacecraft to hop from place to place.

To develop an experimental propulsion system, the Embry-Riddle group repurposed a scuba tank to capture steam. Designing an ideal steam nozzle was especially tricky because there were no existing models, Rukhaiyar said. The team evaluated a variety of rocket nozzles and then reverse-engineered new designs, using mathematics and a 3D printer to test different options. After many attempts, the group came up with a bell-shaped nozzle that worked well in a vacuum.

“A lot of engineering, guesswork and approximations were made, but it all worked out in the end,” Rukhaiyar said. “As an engineer, you test out a few ideas, you see what worked and what didn’t, and you keep iterating until you’ve got it right.”

What are the next steps for the research?

Ideally, Rukhaiyar said, researchers will conduct an in-space demonstration. The prototype spacecraft would be tugged behind another mission before being dropped off in space. It would carry a stored meteorite, from which it would extract water, convert the water into steam and propel itself.

Another Embry-Riddle team worked on theories for controlling the hopping spacecraft’s movements. Faculty members Hever Moncayo and Richard Prazenica developed guidance and intelligent autonomous flight-control systems, in partnership with Honeybee Robotics. Their work was part of a project managed through NASA’s Swamp Works initiative at the Kennedy Space Center.

Rukhaiyar, who is originally from India, said he hopes to pursue his Master’s degree and then work in the aerospace industry after earning his Bachelor’s degree from Embry-Riddle. He learned about the school through his father, an Airbus helicopter pilot. “I cannot thank Embry-Riddle enough for the opportunities they have given to me,” Rukhaiyar said.