Astronomers have struggled to understand the origin of the parallel fractures on Saturn’s icy moon Enceladus, known as “tiger stripes,” from which water-ice spews into space. Now, a single explanation ties all the pieces together. 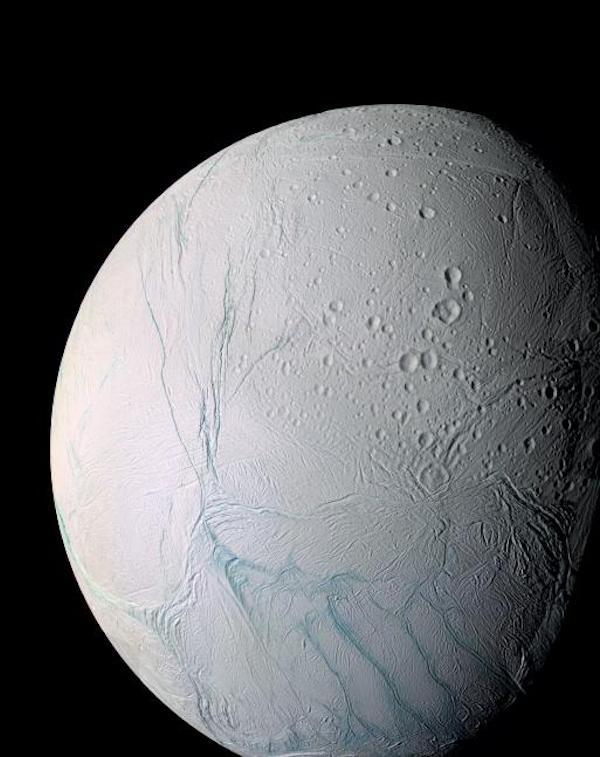 The tortured surface of Saturn's moon Enceladus includes four rifts, sometimes called "tiger stripes," near its south pole. These are the source of its gas-and-particle plumes. Blue tints in this false-color view from Cassini indicate an icy surface covered with coarse grains and boulders.
NASA / JPL / Space Science Institute / CICLOPS

Saturn’s moon Enceladus is famous for its water-spewing geysers, an outward sign of an underground saltwater ocean. But the region that hosts the geysers — an area of so-called “tiger stripes” etched into the icy crust— has long puzzled astronomers.

The parallel stripes, about 35 kilometers (21 miles) apart, are located only at the moon’s south pole, and they’re unlike any features found on other icy moons. No scenario has simultaneously explained all of the stripes’ characteristics.

Now, Douglas Hemingway (Carnegie Institution for Science and University of California, Berkeley) and his colleagues publish an explanation in Nature Astronomy that covers all the bases.

The idea is simple in concept: Once a crack forms in Enceladus’s icy crust, it creates a cascade of fractures next to it.

Enceladus is known to go through cooling periods that thicken its icy crust. As its belowground water ocean freezes, it expands, exerting pressure from the inside. Because Enceladus’s crust is thinnest at its north and south poles, where Saturn’s gravitational pull creates the most heat, that’s where the crust breaks when it begins to pull apart. 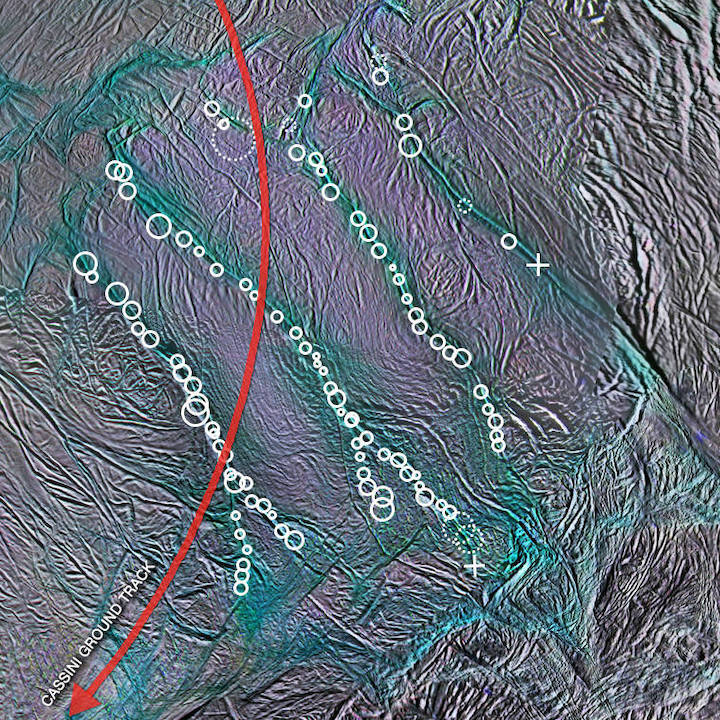 This map shows the active south polar region of Saturn's moon Enceladus. The long, linear, bluish features are the “tiger stripe” fractures, from which a plume of water vapor and other molecules erupts. White circles and crosses represent locations identified by scientists as source locations for dozens of geyser-like jets along the fissures. The red curve is the ground track of Cassini’s October 28, 2015, flyby at the time of the spacecraft's closest approach.
NASA / JPL-Caltech / Space Science Institute / CICLOPS / Porco et al., Astronomical Journal, 2014

Hemingway and colleagues suggest that Baghdad Sulcus, a stripe that cuts directly through the geographic south pole, formed in this way, a crack at the surface that eventually penetrated all the way through the ice shell. Water fills most of the crack, boiling off at the top in geyser-like fashion where it meets the vacuum.

This first crack relieved the pressure from the cooling, expanding ocean — that’s why there are no like fractures at the north pole. But the geyser erupting from this fracture snows water-ice down onto its flanks, building up a ridge on either side over time. The ridge becomes heavy enough to bend, and eventually break, the icy crust, creating another crack at a specific distance — 35 kilometers — from the first one.

This process continued to create stripes in symmetric pairs around Baghdad Salcus: first Cairo and Damascus, then Alexandria and a feature informally named “E.” Eventually, though, the cascade ends, either because there’s not enough eruption “snow” to build up ridges or because the ice crust becomes thick enough not to bend and break. 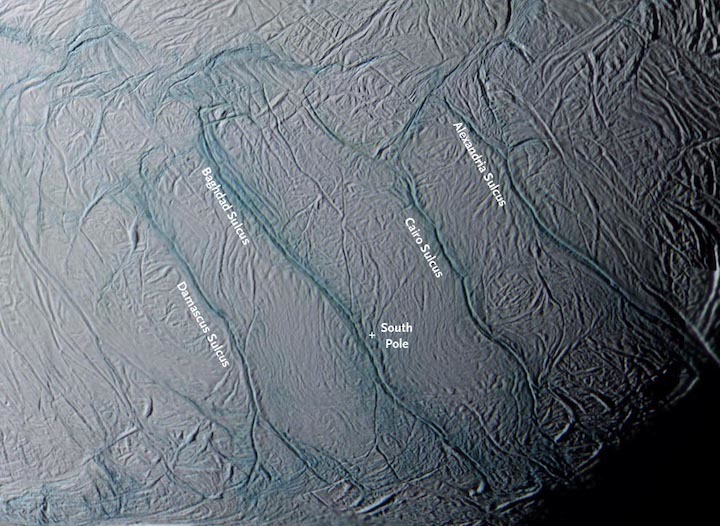 A closeup of the four 80-mile-long rifts(dubbed "tiger stripes") near Enceladus's south pole (white cross). These are the source of its gas-and-particle plumes. Blue tints in this false-color view from Cassini indicate an icy surface covered with coarse grains and boulders.
NASA / JPL / Space Science Institute / CICLOPS

Scientists are commending this all-encompassing scenario. “[This study] corrals a host of observations of Enceladus' south polar terrain and its geysering activity with a rather simple idea,” says Carolyn Porco (Space Science Institute), who was not involved in the study but led the Cassini imaging team that discovered the stripes. 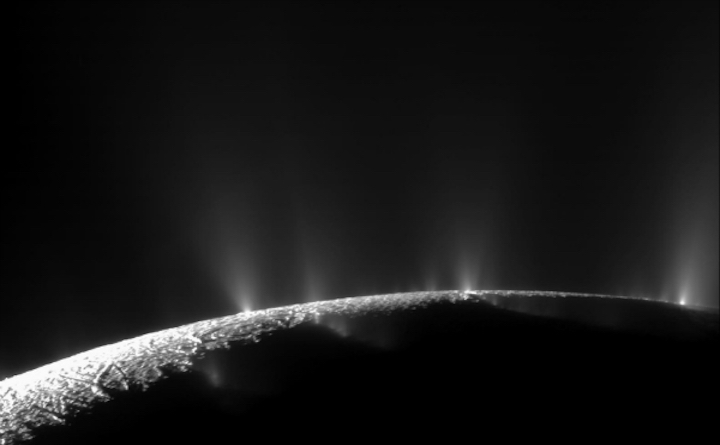 The plumes of Enceladus, captured spewing from the moon's surface by the Cassini spacecraft at a distance of 14,000 kilometers (9,000 miles) in 2010.
NASA / JPL / Space Science Institute / CICLOPS

Frank Postberg (Free University Berlin), an expert on Enceladus who was also not involved in this study, agrees: “I think this is another important ‘milestone’ paper that solves one of the long-standing riddles Enceladus has been puzzling us with since the discoveries by Cassini in 2005.”

Not only that, Postberg adds, but the explanation that the authors propose also explains why such regular fractures occur only on Enceladus and not on other icy moons.

Hemingway explains that the cracks can only form on icy worlds with weak gravity. “After the secondary fracture starts to form, the load (the snow piled up on the edge of the previous fissure) is still there,” he explains. “That load has to be supported by an increasingly broken and therefore weaker ice shell.” So once a crack forms, it will break all the way through the ice unless something counteracts the stress. While tiny Enceladus doesn’t have enough gravity to hold a crack together, other icy moons — such as Europa, Callisto, and Ganymede — do.

The new scenario may help scientists understand other facets of Enceladus’s geology.  Porco, for one, is excited to see whether this process for creating regularly spaced cracks can also explain the regularly spaced geysers within those cracks. “I have long suspected that the geyser spacing is related to the ice shell structure,” Porco adds. “This may be a hint at exactly how that comes about. Another puzzle awaits the intrepid!”