An experiment shows that one of the basic units of life­­­ — nucleobases — could have originated within giant gas clouds interspersed between the stars. 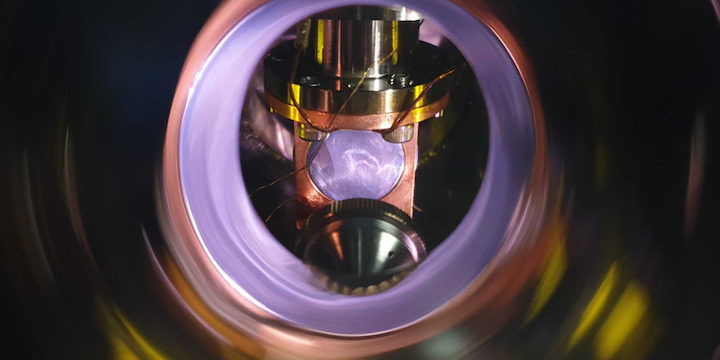 An inside look of an ultra high vacuum reaction chamber that simulates chemical reactions in an interstellar cloud environment.

Essential building blocks of DNA – compounds called nucleobases – have been detected for the first time in a simulated environment mimicking gaseous clouds that are found interspersed between stars. The finding, published in the journal Nature Communications, brings us closer to understanding the origins of life on Earth.

“This result could be key to unravelling fundamental questions for humankind, such as what organic compounds existed during the formation of the solar system and how they contributed to the birth of life on Earth,” says Yasuhiro Oba of Hokkaido University’s Institute of Low Temperature Science.

Scientists have already detected some of the basic organic molecules necessary for the beginnings of life in comets, asteroids, and in interstellar molecular clouds: giant gaseous clouds dispersed between stars. It is thought that these molecules could have reached Earth through meteorite impacts some four billion years ago, providing key ingredients for the chemical cocktail that gave rise to life. Learning how these molecules formed is vital to understanding the origins of life.

The basic structural unit of DNA and RNA is called a nucleotide and is composed of a nucleobase, a sugar, and a phosphate group. Previous studies mimicking the expected conditions in interstellar molecular clouds have detected the presence of sugar and phosphate, but not of nucleobases.

Now, Yasuhiro Oba and colleagues at Hokkaido University, Kyushu University, and the Japan Agency for Marine-Earth Science and Technology (JAMSTEC) have used advanced analytical methods to detect the fundamental nucleobases in a simulated interstellar cloud environment.

The team conducted their experiments in an ultra-high vacuum reaction chamber. A gaseous mixture of water, carbon monoxide, ammonia, and methanol was continuously supplied onto a cosmic-dust analogue at a temperature of -263° Celsius. Two deuterium discharge lamps attached to the chamber supplied vacuum ultraviolet light to induce chemical reactions. The process led to the formation of an icy film on the dust analogue inside the chamber.

The team used a high-resolution mass spectrometer and a high-performance liquid chromatograph to analyse the product that formed on the substrate after warming it to room temperature. Recent advances in these technological tools allowed them to detect the presence of the nucleobases cytosine, uracil, thymine, adenine, xanthine, and hypoxanthine. They also detected amino acids, which are the building blocks of proteins, and several kinds of dipeptide, or a dimer of amino acid, in the same product. 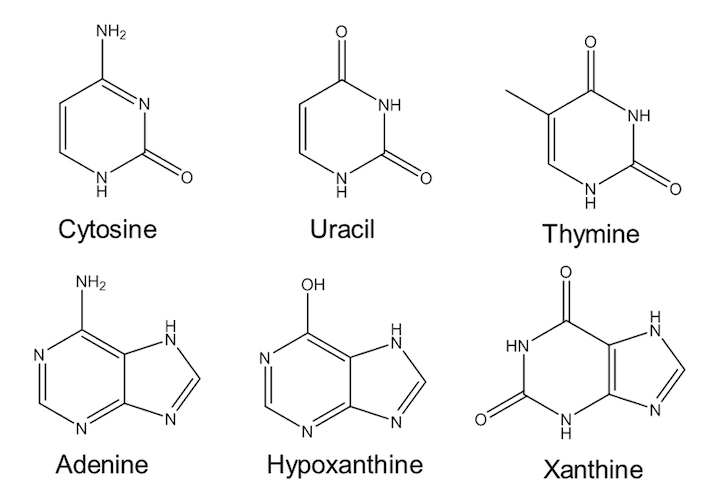 The fundamental nucleobases detected in a simulated interstellar cloud environment.

The team suspects that past experiments simulating interstellar molecular cloud environments would have produced nucleobases, but that the analytical tools used were not sensitive enough to detect them in complex mixtures.

“Our findings suggest that the processes we reproduced could lead to the formation of the molecular precursors of life,” says Yasuhiro Oba. “The results could improve our understanding of the early stages of chemical evolution in space.”