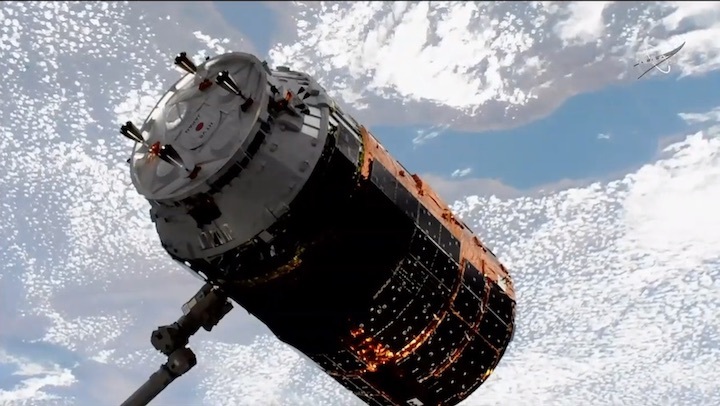 The high-altitude link-up occurred as the station flew 262 miles (421 kilometers) over Angola, concluding the HTV’s four-day pursuit of the orbiting research complex since its launch Tuesday from the Tanegashima Space Center in southern Japan.

The arrival of the Japanese cargo freighter Saturday came during a busy week of traffic at the space station. A three-person crew aboard a Russian Soyuz spacecraft docked with the complex Wednesday to temporarily raise the station’s crew size to nine.

Another Soyuz capsule is set to depart the station Oct. 3 to bring home two members of an outgoing space station crew, along with UAE space flier Hazzaa Ali Almansoori, who flew to the station Wednesday with two new expedition crew members.

Packed with some 8,326 pounds (3,777 kilograms) of equipment, experiments and crew provisions, the Kounotori 8 spacecraft approached the space station in autopilot mode Saturday. After Koch’s capture of the HTV supply ship, control of the robotic arm was to be handed over to ground teams to maneuver the cargo freighter to a berthing port on the nadir, or Earth-facing, side of the station’s Harmony module.

After opening hatches leading to the HTV, the crew inside the station will unpack 5,313 pounds (2,410 kilograms) of cargo inside the HTV’s pressurized logistics carrier. Meanwhile, robots outside the station will extract a pallet from the HTV’s unpressurized cargo bay containing six lithium-ion batteries to upgrade the space station’s power system.

Astronauts on the space station will conduct five spacewalks — currently planned on Oct. 6, 11, 16, 21 and 25 — to begin install he fresh batteries, which will replace aging and less-capable nickel-hydrogen batteries on the P6 solar array module on the far port side of the station’s truss backbone.

The Kounotori 8 mission delivered the third set of six lithium-ion batteries to upgrade the space station’s four huge U.S.-built external power modules, each of which features solar array wings that span 240 feet (73 meters) tip-to-tip. The sixth HTV mission in 2016 carried the first set of new batteries to the station, followed by a second batch last year on the Kounotori 7 resupply mission.

A final set of six batteries will launch on the ninth HTV flight next year.

JAXA uses the HTV missions as part of its contribution to the space station program. Each HTV cargo freighter measures about 33 feet (10 meters) long and about 14 feet (4.4 meters) in diameter.

The Kounotori 8 mission also carried food, fresh drinking water, a high-pressure gas tank to recharge the space station’s internal atmosphere with oxygen and nitrogen, and spacewalking tools, such as high-definition cameras and equipment for a series of repair spacewalks planned later this year for the Alpha Magnetic Spectrometer-2 cosmic ray experiment.

The HTV also delivered research payloads to the space station.

One of the experiments will demonstrate a high-speed satellite laser communications system developed by JAXA and Sony Computer Science Laboratories. The technology demonstrator will test a laser link with a ground station, which can accommodate higher-bandwidth communications than radio systems.

The Small Optical Link for International Space Station, or SOLISS, experiment will be mounted on an experiment platform outside the space station’s Japanese Kibo laboratory module.

“Sony CSL is taking advantage of the in-orbit demonstrations to complete our long-distance laser communication system,” said Hiroaki Kitano, president of Sony CSL. “It will be the first step for Sony to build upon the results of these demonstrations and put it into practical use in society as we commercialize it.

“The opportunity to use Kibo for the in-orbit demonstrations makes it possible to greatly advance the research and development of the optical communication system, much more quickly than if we had launched a small satellite for the same purpose on our own,” Kitano said. “The SOLISS system is built using consumer components. After the demonstrations, we will retrieve the SOLISS unit and perform follow-up analyses, which we expect will further accelerate our commercialization process.”

Japan’s Hourglass experiment also launched on the eighth HTV mission to help scientists investigate the behavior of soil and rock particles under low gravity, simulating the conditions future probes might encounter on a small planet or asteroid.

New hardware for a cellular biology experiment rack is also flew to the space station on the Kounotori 8 spacecraft, expanding the station’s capabilities for biological research.

Three CubeSats also rode to the station inside the Kounotori 8 spacecraft. Astronauts will transfer them to the Japanese Kibo module, where they will install them into a deployer for release into orbit through an airlock.

The 2-pound (1-kilogram) NARSSCube 1 nanosatellite was developed by Egypt’s National Authority for Remote Sensing and Space Science in partnership with the Kyushu Institute of Technology in Japan. It carries a low-resolution imaging camera.

The AQT-D CubeSat, which weighs 8.1 pounds (3.7 kilograms) and is about the size of a shoebox, will demonstrate a water-based satellite propulsion system. The AQT-D mission is led by the University of Tokyo.