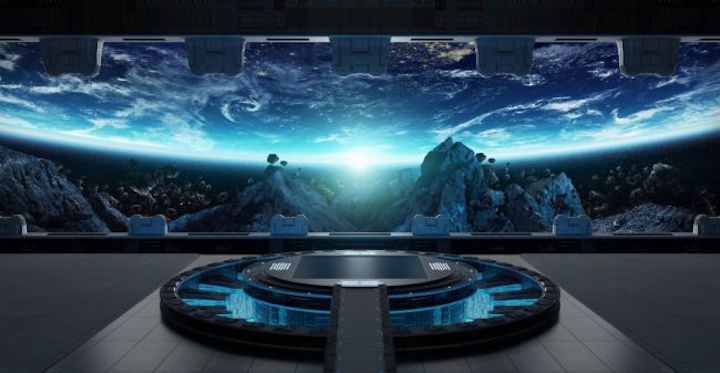 BELLEVUE, Wash. — If life evolved on other planets as it did on Earth, aliens may be zooming around in vehicles that belch pollution into space. Or they might have had their very own Edison — and a planet blanketed in artificial light.

A group of astronomers is searching for these strange signals from distant exoplanets, or what are called "technosignatures," because they may point to the existence of intelligent civilizations elsewhere in the cosmos. The  term "technosignature" is a relatively new one, first coined in 2007 by astronomer Jill Tarter, who at the time was the director of the Center for SETI Research.

But even before the birth of the term, astronomers have been searching for technosignatures, the most popular one being radio transmissions. Practically speaking, that often meant looking for something strange — an anomaly in the data that could indicate the presence of something unnatural — like a planet that's a bit too bright. Historically, that search wasn't taken seriously. Now, however, scientists say they may have a real shot at finding such signals — as long as they look for the right things in the right places.

What would such technosignatures look like? For instance, when scanning distant exoplanets, data anomalies such as an unusual atmospheric makeup could be a clue to "complex life engineering its environment," said Joseph Lazio, an astronomer at NASA's Jet Propulsion Laboratory, during a talk at the Astrobiology Science Conference on June 26.  But scientists must be cautious; that same signal "could just be a planet covered in pond scum that's producing oxygen," Lazio said.

Another possible technosignature is the ultrafast blinking of a star. "If you see a star, say, blinking on and off faster than a microsecond, that's not obviously a natural phenomenon," he said. What's more, almost any reasonably advanced civilization could create such a signature.

"It's not really all that difficult, we can do it today on a lab bench," Lazio said. Humans have created lasers, for example, that release photons trillions of times a second, he added.

Radio waves beaming through space at a certain frequency may also be a clue to intelligent alien civilizations. Natural sources don't typically produce radio waves within a very narrow range of frequencies, Lazio said. And yet, "it's really easy for us to do it" artificially, Lazio said. So if we can do it ... couldn't E.T.?

Searching for life in the cosmos has historically focused on finding biosignatures, or biological signals, such as oxygen left behind when living creatures breathe. Today, we have many ways to detect biosignatures.

Similarly, there are several major classes of technosignatures: chemical signatures such as atmospheric pollution; megastructures that reflect, absorb or block light from a planet's host star; "self-luminous" signals such as artificial illumination, radio or laser communication; and waste heat, which is "an unavoidable result of any kind of activity," Svetlana Berdyugina, the director of the Kiepenheuer Institute for Solar Physics in Freiburg, Germany, said during the talk. (Waste heat is produced by machines or other processes that use energy).

Berdyugina and her team are looking for optical signals. As a planet travels around its own star, the light that is reflected by the planet changes, depending on where the planet is in its rotation and in its orbit. Stitching together signals produced by that reflected light over time, researchers can create what's called a light curve. That, in turn, could provide a glimpse of the planetary surface — and any unusual features there, Berdyugina said. For example, a giant megastructure will reflect light in a very different way, than, say, an empty field.

Berdyugina and her team previously used this technique to resolve geographic features, such as mountains and craters, on planets and moons in our own solar system, as well as on simulated exoplanets. Now, they are working to understand if this technique could reveal weird shapes and artificial illumination on a planet's surface.

There are also other programs searching for light signal, such as a 10-year initiative from the Search for Extraterrestrial Intelligence (SETI), called Breakthrough Listen. That team is surveying thousands of stars for not only optical signals but also radio signals.

While astronomers could dream up a nearly infinite list of potential technosignatures, only a handful are worth looking for.

"The game is to try and figure out something that is artificial but is also feasibly detectable," Thomas Beatty, an assistant astronomer at the Steward Observatory of the University of Arizona, told Live Science. "I think we are closer than a lot of people imagine."

One possibility? Myriad night lights, illuminating the surface of a distant world, Beatty said at a talk at the conference. And a proposed, space-based telescope called the Large UV Optical Infrared Surveyor (LUVOIR) could be a perfect tool to hunt for them. If it gets built, LUVOIR will use its 26- to 52-foot (8 to 16 meters) mirror to scan exoplanets and measure gases in their atmosphere. But the same telescope could also indirectly detect technosignatures, he added.

At the point where you could feasibly detect — really strongly detect — oxygen levels in an atmosphere, you should also be able to detect city lights, he said. Of course, oxygen levels are going to be detected at an "exquisite" level of precision, and by comparison, light pollution from cities will not be easy to find.

Existing land-based telescopes, such as the Extremely Large Telescope or the Giant Magellan Telescope, might also be able to detect city lights on alien planets, he said. Unlike LUVOIR, however, these Earthbound tools would be somewhat impeded by our own atmosphere. So city lights would have to be really strong — an exoplanet would have to have 10 or 20 times as many cities as Earth does. Those densely packed planets would have to be "like a future Earth from the year 2200," in order for us to find them, he said.

But not everyone is convinced that the search will turn up anything.

Unlike biosignatures, alien technosignatures might be too faint, said Gustavo Cruz Diaz, a postdoctoral fellow at the NASA Ames Research Center who attended the talks, but was not involved in the research. "If extraterrestrial life looks at us, they will not find a [single] technosignature," he told Live Science after the talk. Even though we think we have an advanced civilization, from a distant perch in space, we simply haven't modified our planet enough to be detected — at least with our existing technology. "You have to cover the entire Earth with cities to know there is something there,” Cruz Diaz said.

What's more, technology is ever-changing, and so we might be searching for the wrong things at the wrong time, said Andrew Mattioda, a research scientist at NASA Ames Research Center in Mountain View, California, who also attended the talk. Trying to use signals from technology "to identify another civilization is like trying to hit a moving target," he said. "You don't know what technology is going to be."

Earthbound scientists are also constrained by what we know. Hunting aliens with technosignatures may be like searching for missing keys under a streetlight because that's the only place we can see, Beatty said.

Even so, we can only hunt for what we can imagine being out there, he suggested. As Shakespeare writes, "There are more things in heaven and earth, Horatio, than are dreamt of in your philosophy." But we have to have a starting point, and so the reasonable, the logical starting point, is to look for something like Earth," Beatty added.

Historically, the search for technosignatures has been much less popular than the hunt for biosignatures, especially in terms of funding, Lazio said. Nor has the search always been taken seriously by other astronomers, Beatty said. But that's now changing, in large part because "we've become very good at measuring exoplanet atmospheres" and small signals around exoplanets, Beatty said.

So, it's possible that as our humble Earthling technology improves, the hunt for technosignatures may gain more respect. After all, searching for life on other worlds "used to be something that seemed very pie in the sky," he said. "Whereas now, it's something we seriously think about today."