We're still waiting for our first look at the apparently dead Vikram on the lunar surface. 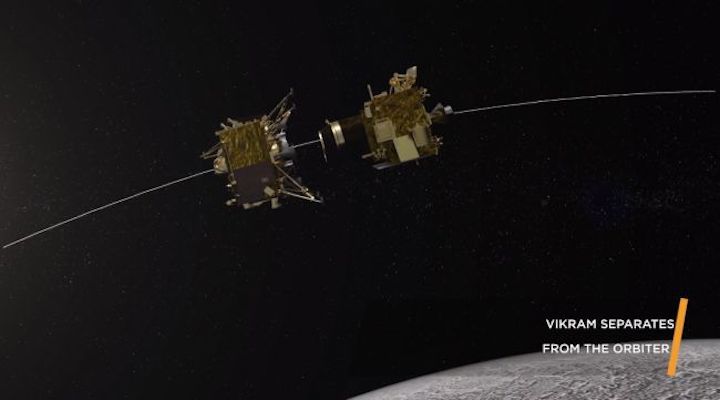 On Sept. 2, the Indian Space Research Organisation's Chandrayaan-2 moon orbiter successfully released its Vikram lander, as seen in this illustrated depiction. But Vikram's landing attempt on Sept. 6 did not go as planned; mission control lost contact with Vikram just before touchdown, and the lander has been silent ever since.
(Image: © India Space Research Organisation)

“It was near dusk as the region prepares to transition from a two-week lunar day to an equally long lunar night, so shadows covered much of the region, and Vikram may not be in the LROC’s field of view," Carreau wrote, citing a NASA statement. (The Aviation Week article is behind a paywall.)

LROC lead investigator Mark Robinson, of Arizona State University, provided the following statement to Inside Outer Space: "Per NASA policy, all LRO data are publicly available. NASA will share any before and after flyover imagery of the area around the targeted Chandrayaan-2 Vikram Lander landing site to support analysis by the Indian Space Research Organization."

The statement also noted that, during the Sept. 17 LRO flyover of the area, local lunar time was near dusk, "leading to poor lighting and a challenging imaging environment."

An overflight last week of the Chandrayaan 2 landing site on the moon by NASA’s Lunar Reconnaissance Orbiter has turned up no clear sign of the lost Indian lander. Another flyover with better lighting conditions is scheduled next month.

LRO’s high-resolution camera is searching for India’s Vikram lander, part of the Indian Chandrayaan 2 lunar mission, after ground teams lost contact with the spacecraft during a lunar landing attempt Sept. 6.

“LRO flew over the area of the Vikram landing site on Sept. 17 when local lunar time was near dusk; large shadows covered much of the area,” NASA said in a statement. “The Lunar Reconnaissance Orbiter Camera (LROC) acquired images around the targeted landing site, but the exact location of the lander was not known so the lander may not be in the camera field of view.”

In any case, hopes of contacting the Vikram lander have waned since the Sept. 6 landing attempt. Officials from the Indian Space Research Organization said imagery from the country’s Chandrayaan 2 orbiter, which launched in tandem with the Vikram lander, had located the landing craft on the moon.

“All possible efforts are being made to establish communication with (the) lander,” ISRO said in a statement Sept. 10.

ISRO has not released any of the Chandrayaan 2 images claimed to show the Vikram lander, and officials did not confirm whether the lander appeared to be intact on the lunar surface, or if the imagery suggested the spacecraft crashed. The final telemetry data from Vikram indicated it was plummeting toward the moon at high speed.

Even if the Vikram lander landed intact, the spacecraft was only designed for a two-week mission, leaving little hope of recontacting the lander. The sun has set on the Vikram landing site, located near the lunar south pole, and the lander was not designed to survive the frigid, dark lunar night.

NASA said the LRO camera team is analyzing the new imagery to see if the Vikram lander is visible amid the long shadows at the landing site.

“LRO will next fly over the landing site on October 14 when lighting conditions will be more favorable,” NASA said. “NASA will make the results of the Sept. 17 flyover available as soon as possible after a necessary period of validation, analysis, and review.”

The Vikram lander carried a rover named Pragyan — the Sanskrit word for “wisdom” — and several scientific instruments, including cameras, seismic sensors, rock composition payloads, and an underground thermal conductivity probe. Vikram, named for the father of India’s space program, also carried a U.S.-provided laser reflector, which NASA intended to use to make precise measurements of the distance between the Earth and the moon.

The Chandrayaan 2 orbiter, which continues its mission, carries its own science instruments. The orbiter’s payloads include a high-resolution mapping camera and sensors designed search for water molecules on the moon.