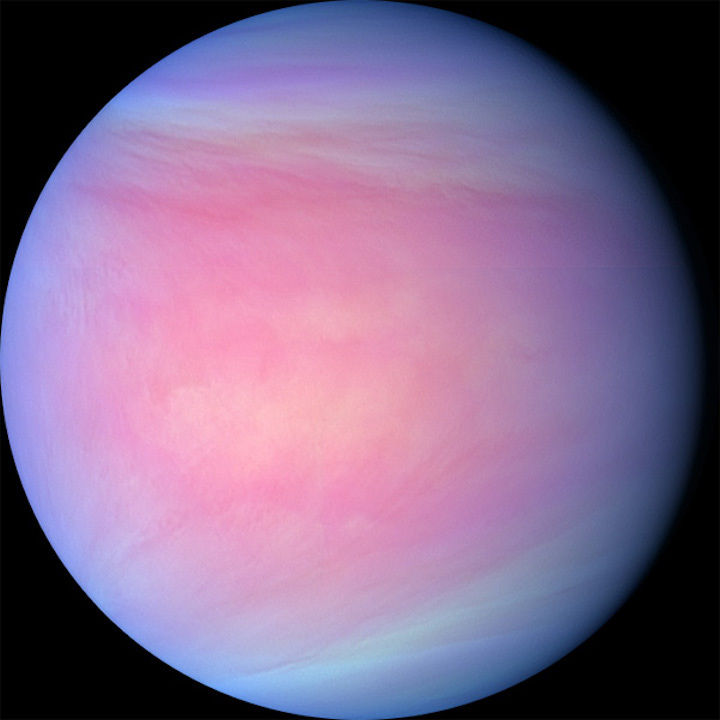 A hostile atmosphere surrounds our sister planet Venus. The air is thick, made mostly of carbon dioxide, with a touch of nitrogen and sulfuric acid, and it rotates around the planet at breakneck speeds. While Venus doesn’t provide a good chance for life, its atmosphere nevertheless presents mysteries aplenty for scientists interested in extrasolar weather and atmospheric dynamics.

In part, Venus remains a mystery because so few spacecraft have visited it. Japan has provided the exception, having put the Akatsuki spacecraft into orbit in 2015, following a five-year detour forced by a main thruster failure.

Akatsuki carries five cameras, each geared toward a different waveband, which enables it to observe the planet’s atmosphere to different depths. Researchers have used these instruments to reveal unexpected features, such as a giant atmospheric wave, reported in 2017, that spans both hemispheres.

Now two researchers have announced further studies of our sister planet’s clouds and air, reporting at the joint meeting of the European Planetary Science Congress and the American Astronomical Society’s Division for Planetary Sciences in Geneva, Switzerland.

Both researchers said that their observations are related to, and could even help explain, the super-rotation of Venus’s upper atmosphere, which moves faster than the surface turns. Venus takes 243 Earth days to complete a single rotation, while its atmosphere whisks around the planet in just four Earth days, but why this is so remains unclear.

A group of researchers led by Takeshi Horinouchi (Hokkaido University, Japan) and Yeon Joo Lee (JAXA / ISAS and TU Berlin, Germany) have reported that the super-rotation speed at the cloudtops changes throughout Venus’s year.

Oddly enough, they also found winds are faster in the northern hemisphere than in the southern hemisphere. The researchers think that this speed difference could be linked to the distribution of an unidentified substance that absorbs ultraviolet radiation. Varying levels of this “unknown absorber”  affect how much heat is absorbed by the atmosphere, thus affecting wind speeds.

Another team, led by Kiichi Fukuya and Takeshi Imamura (both at the University of Tokyo) used Akatsuki’s longwave infrared camera to observe the temperature of Venus’s clouds on both the day and night sides of the planet. These observations revealed mottling and streaks in the cloud cover, features that changed over time.

Based on these measurements, the researchers then determined how winds travel in the north-south direction: While previous studies had found that clouds tend to drift toward the poles during the day, the new observations reveal that this tendency occasionally reverses at night, when the clouds sometimes move equatorward instead.

Previously, researchers had found that during the day, clouds tend to move toward the planet's poles.
University of Tokyo

Now new observations show that during the night, clouds tend to move back toward the equator.
University of Tokyo

The researchers are still working to disentangle the predominant directions and velocities of these nighttime motions while trying to come up with a plausible explanation for their origin.

“The nightside motion was totally unknown,” Fukuya says. “[It] wasn’t anticipated by many researchers and may lead to a new view of Venus’ atmospheric dynamics.”

According to Imamura, the contrasting cloud motions could be  associated with so-called thermal tides, planet-scale atmospheric waves generated when the Sun heats the cloud layer. As the gas heats up, it escapes, either moving toward higher altitudes or around to the cooler nightside.

During a brief period next year, Akatsuki won’t be alone at Venus. On October 15, 2020, the BepiColombo spacecraft, a joint operation between JAXA and the European Space Agency (ESA), will approach Venus in the first of two flybys past the planet during the probe’s long journey to Mercury.

Taking advantage of this opportunity, both space agencies are orchestrating a coordinated observing campaign that will also enlist several ground-based observatories, such as the Canada France Hawaii Telescope and the NASA Infrared Telescope Facility, both on Maunakea, Hawai‘i.

During the first close approach, BepiColombo will fly past Venus at an altitude of 10,681 kilometers, while Akatsuki will be at the farthest point of its orbit, some 30 times farther away. At least eight of MPO’s 11 instruments and three of the five onboard Mio will be operational at Venus. 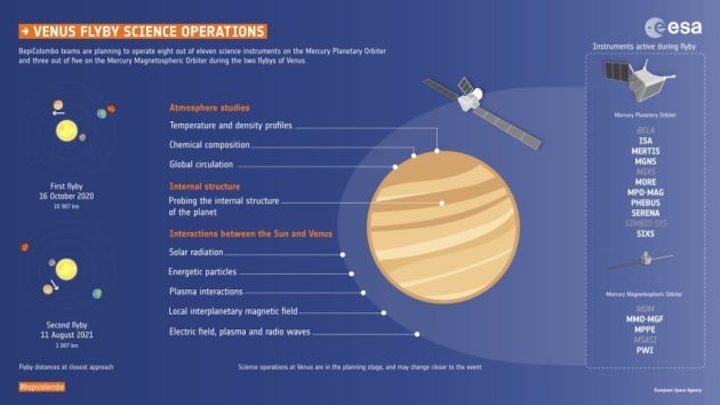 Graphic highlighting some of the science themes that may be studied during BepiColombo's two upcoming flybys of Venus. (Click image for higher-res version.)
ESA

The two probes will see different sides of the planet during the 2020 window, providing a unique opportunity to observe the whole planet at once, says Yeon Joo Lee (Technical University of Berlin). During the second flyby, in August 2021, BepiColombo will approach even more closely, passing by at an altitude of 1,000 kilometers.

Valeria Mangano (National Institute of Astrophysics, Italy), a representative for the BepiColompo mission, highlighted potential contributions from two of the instruments onboard MPO, PHEBUS and MERTIS, which will study the planet in ultraviolet and infrared, respectively. The data they provide will give researchers insight into the planet’s middle and upper atmosphere. Other instruments are expected to observe the interaction between the Sun and Venus’s upper atmosphere.