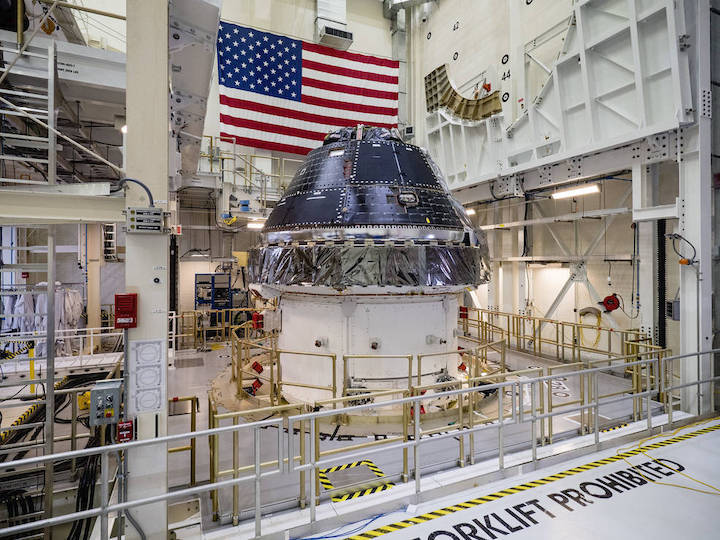 NASA completed building and outfitting the Orion crew capsule for the first Artemis lunar mission in June 2019. The spacecraft is being prepared for its uncrewed test flight atop NASA’s Space Launch System (SLS) rocket. Artemis 1 is the first test flight of the SLS and Orion spacecraft as an integrated system and will send Orion thousands of miles beyond the Moon and back to Earth.
Credits: NASA/Radislav Sinyak

NASA is setting in motion the Orion spacecraft production line to support as many as 12 Artemis missions, including the mission that will carry the first woman and next man to the Moon by 2024.

The agency has awarded the Orion Production and Operations Contract (OPOC) to Lockheed Martin of Littleton, Colorado. Spacecraft production for the Orion program, managed at NASA’s Johnson Space Center in Houston, will focus on reusability and building a sustainable presence on the lunar surface.

“This is a great day for the men and women at Johnson Space Center. They are crucial to our national space program, and have an undeniable legacy and record of success in advancing America’s leadership in the human exploration of space,” said Sen. Ted Cruz of Texas. “I am pleased that Administrator Bridenstine has heeded my calls and is taking significant steps to ensure that Johnson continues to grow with the exciting future of manned exploration that lies ahead. More needs to be done, and I look forward to production ramping up in the weeks and months to come and to more opportunities with NASA.”

OPOC is an indefinite-delivery/indefinite-quantity contract that includes a commitment to order a minimum of six and a maximum of 12 Orion spacecraft, with an ordering period through Sept. 30, 2030. Production and operations of the spacecraft for six to 12 missions will establish a core set of capabilities, stabilize the production process, and demonstrate reusability of spacecraft components.

“This contract secures Orion production through the next decade, demonstrating NASA’s commitment to establishing a sustainable presence at the Moon to bring back new knowledge and prepare for sending astronauts to Mars,” said NASA Administrator Jim Bridenstine. “Orion is a highly-capable, state-of-the-art spacecraft, designed specifically for deep space missions with astronauts, and an integral part of NASA’s infrastructure for Artemis missions and future exploration of the solar system.”

With this award, NASA is ordering three Orion spacecraft for Artemis missions III through V for $2.7 billion. The agency plans to order three additional Orion capsules in fiscal year 2022 for Artemis missions VI through VIII, at a total of $1.9 billion. Ordering the spacecraft in groups of three allows NASA to benefit from efficiencies that become available in the supply chain over time – efficiencies that optimize production and lower costs.

Spacecraft reusability – itself a significant cost saver for the agency – will help NASA build the capabilities for sustainable exploration at the Moon and beyond. The long-term plan is to reuse the recovered crew modules at least once. The first phase of reusability will start with Artemis II. Interior components of the spacecraft, such as flight computers and other high value electronics, as well as crew seats and switch panels, will be re-flown on Artemis V. The Artemis III crew module will be re-flown on Artemis VI.

The first six spacecraft will be acquired by cost-plus-incentive-fee ordering. Because the cost of a complex, high-tech system generally decreases over time as the design stabilizes and production processes mature, NASA will negotiate firm-fixed-price orders for future missions to take advantage of the anticipated spacecraft production cost decreases. Furthermore, the cost incentives on the cost-plus-incentive-fee orders are designed to motivate favorable cost performance during early OPOC production and drive substantially lower prices for any subsequent firm-fixed-price orders issued under this contract.

“As the only vehicle capable of deep space exploration, the Orion spacecraft is critical to America’s continued leadership,” said Rep. Brian Babin of Texas. “Today’s announcement signals that we are moving closer towards operation and production. While I look forward to learning more of the details, it’s encouraging to see that this program is moving along as it should be. I am proud of the Orion program team and contractor partners at Johnson Space Center as they move towards getting the vehicle ‘flight ready.’ Without the brilliant minds and extraordinary leadership of the hard-working men and women at Johnson, our country would not be the preeminent spacefaring nation in the world.”

Work under this contract also will support production of NASA’s lunar-orbiting Gateway and evolving mission requirements. Production of certain spacecraft components already designed and qualified for Orion will be provided for Gateway use, eliminating the need for the Gateway Program to develop and qualify similar components.

“The men and women at Johnson Space Center represent the best and brightest scientific minds, and I’m confident with additional Orion spacecraft they will push the limits of exploration to the Moon and beyond,” said Sen. John Cornyn of Texas. “I commend the Trump Administration for recognizing the importance and tradition of Houston as the center of human spaceflight and exploring the next frontier.”

Houston has long been the hub of America’s human space exploration program, from the early days of Gemini, Mercury, and Apollo to Artemis. With NASA’s accelerated return to the Moon, Johnson Space Center now is managing more major human spaceflight programs than ever before. In addition to the Orion program, the Texas facility also manages NASA’s Gateway and International Space Station programs, and is home to the Mission Control Center and America’s astronaut corps – the next moonwalkers. Johnson also manages the agency’s Commercial Lunar Payload Services, the first two deliveries for which are targeted to launch to the Moon in July 2021.

“No other spacecraft in the world can keep humans alive hundreds of thousands of miles from Earth for weeks at a time with the safety features, crew accommodations, technical innovations, and reliability that Orion provides,” said Mark Kirasich, Orion Program manager at Johnson. “With the design and development phase of Orion largely behind us, this new contract will enable us to increase efficiencies, reuse the spacecraft, and bring down the cost of reliably transporting people between earth and the Gateway.”

NASA is working to land the first woman and next man on the Moon in five years as part of the agency’s Artemis program. Orion, the Space Launch System rocket and Gateway are part of NASA’s backbone for deep space exploration. Work is well underway on both the Artemis I and II Orion spacecraft. Engineers at Kennedy Space Center in Florida have completed and attached the crew and service modules for Artemis I and are preparing the spacecraft for environmental testing. Meanwhile, teams at Kennedy are integrating thousands of parts into the crew module for Artemis II in preparation for the first crewed Artemis mission.

The Artemis program is the next step in human space exploration. It’s part of NASA’s broader Moon to Marsexploration approach, in which we will quickly and sustainably explore the Moon and use what we learn there to enable humanity’s next giant leap, sending astronauts to Mars.