This beautiful view from ESA’s Mars Express stretches from the bright, cloud-covered north pole of Mars to the contrasting hues of the northern hemisphere and the cratered terrain in the south.

Mars Express has been orbiting Mars since 2003. The spacecraft has sent back myriad breathtaking images of our planetary neighbour in the past decade and a half, captured by the probe’s on-board High Resolution Stereo Camera – and this image is no different.

The spacecraft imaged this slice across the planet’s surface in June 2019, when the camera took several global views. Visible at the top of the frame is Mars’ ethereal north pole: this is permanently covered by a cap of frozen water and carbon dioxide, which thickens in the northern martian winter and thins in the summer.

The northern polar cap is seen here encircled by bright, eye-catching clouds, tendrils of which snake downwards from the polar region to obscure some of the planet’s northern hemisphere. As this image shows, this patch of Mars is a mix of different tones and colours – a reflection of the different chemical and physical characteristics of the material that makes up the surface. Mars’ two hemispheres are very different in a number of ways.

This separation can be seen here, and is shown especially clearly in the accompanying topographic context map.

The dark and dusty young plains of the northern hemisphere sit just below the white northern cap; these meet and merge with a prominent escarpment that slices across the planet, creating a dark scar on the tan-coloured surface. Below this, in tones ranging from rusty orange to pale butterscotch, are the southern highlands, featuring more craters than it is possible to count. 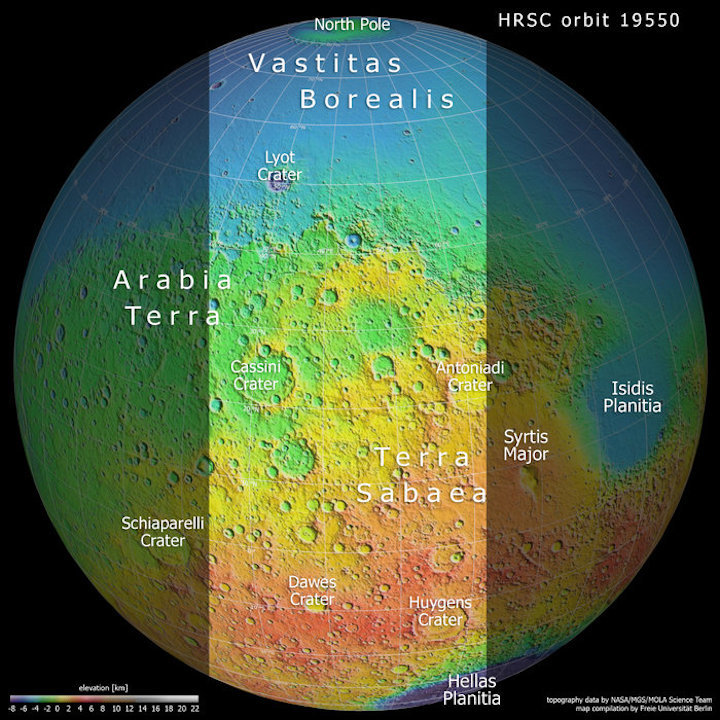 Two main regions are shown here: Arabia Terra (towards the upper left) and Terra Sabaea (to the middle and lower right, forming the main bulk of the highlands visible in this slice).

The light region stretching out of frame to the bottom right is Hellas Planitia, a plain that is home to the Hellas basin: one of the largest basins identified on Mars – and, in fact, in the Solar System – at 2300 km across.

The split between Mars’ two hemispheres is known as the martian dichotomy, and remains one of the greatest mysteries about the planet.

Was it formed due to geological processes within Mars’ mantle? Did the planet’s crust once comprise various moving tectonic plates, as we see on Earth, that pushed against one another to form the dichotomy? Could it have been created by one or more colossal past impacts – or by another process entirely? 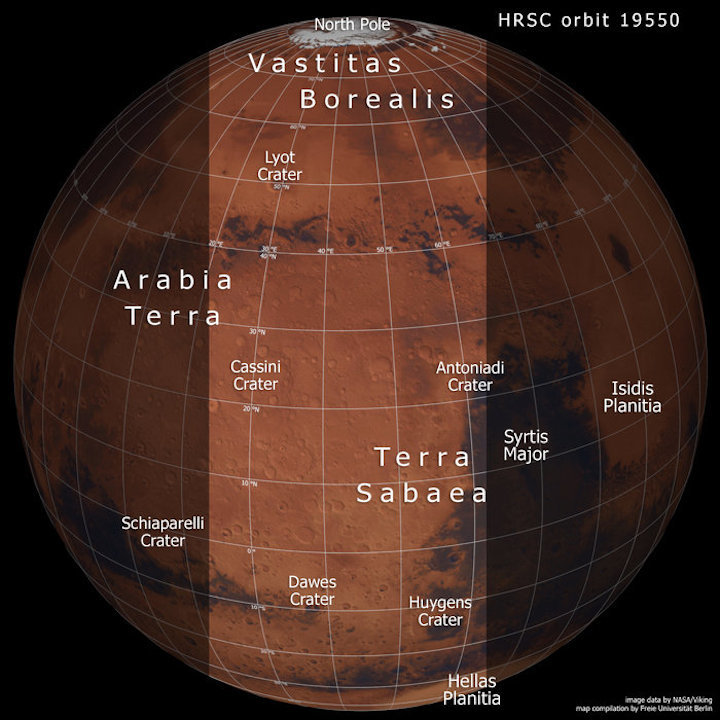 Observations of the boundary zone between the two hemispheres show that this region has been altered over time by wind and water, including by glaciers. Mars is thought to have seen various bursts of glacial activity over the years, where deposits of ice – sometimes hidden beneath layers of soil or dust – form viscous flows that slowly move across the surface, altering it as they go.

Mars Express was recently joined at Mars by the ESA-Roscosmos ExoMars Trace Gas Orbiter (TGO), which arrived in 2016 and has since been analysing the martian atmosphere and mapping the planet’s surface. Mars Express and the TGO will soon welcome the ExoMars Rosalind Franklin rover and its accompanying surface science platform, which are scheduled for launch in July of 2020.

This growing fleet will continue ESA’s long-standing presence at Mars, and further our understanding of the planet and its many remaining scientific mysteries – including the martian dichotomy.

Mars-Chroniken - FROM CLOUDS TO CRATERS
1100 Views
Created with page4