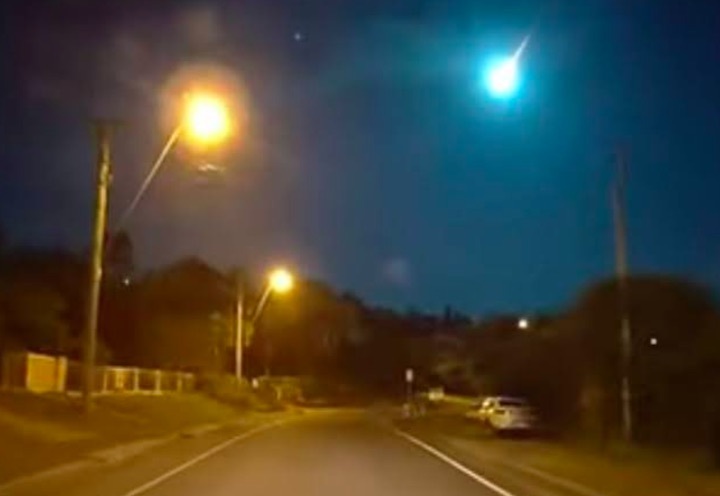 Space to play or pause, M to mute, left and right arrows to seek, up and down arrows for volume.

VIDEO: METEOR LIGHTS UP THE SKY (ABC NEWS)
RELATED STORY: Meteor suspected as 'fireball' filmed in Australian night sky
RELATED STORY: 'The biggest event we've seen': Meteor landed in ocean 400km off Adelaide
RELATED STORY: How an INCH bag and a WWII bunker is plan B if scientists can't save us from an asteroid strike
RELATED STORY: Astronomers have discovered a new comet — and it could be from outside the solar system

A fireball meteor — possibly as small as a tennis ball — has burst into the Earth's atmosphere causing a flash of light and a sound "like thunder" over Tasmania and Victoria, causing some to fear the worst.

The object flew across the horizon just before 8:30pm (AEST), with videos being shared by excited eyewitnesses in both states.

Adrian from Mole Creek said he saw a vivid light and heard what "sounded like thunder".

"I was outside and it was all nice and dark and suddenly the backyard lit up, like a helicopter going over with a spotlight, quite low," he said.

"The front of it was orange and had a really long white tail. It was pretty quiet going over but about 20 seconds later we heard the rumble."

Dominic McAlinden said he covered his ears, expecting an explosion.

"Night turned to day, and a blue-and-white streak turned red and orange as it burnt up," he said.

PHOTO: Still from dashcam footage which was posted to YouTube by Adam Y, who wrote 'mum thought it was fireworks lol'. (YouTube: Adam Y)

Victor was behind the wheel on the Bass Highway in northern Tasmania when "just out of the corner of my eye to the east I saw what appeared to be like a skyrocket shooting down to the ground".

"It appeared to be only half a kilometre away. I was very surprised to hear it was so far away because it appeared [to be] within several hundred metres."

Hazel, in Penguin on the northern Tasmania coast said "it lit the whole town up".

"A few seconds later was like a massive big bang of thunder and a friend rang and she'd been down in the town and said there were people everywhere."

Victorian Rachel Kazakis said: "It was amazing! I honestly thought we were all goners!".

Monica Campo said she saw it from Reservoir near Melbourne: "I thought it was weird lightning but the colours were amazing."

Jane Nuthall from Chelsea, Victoria, said she at first believed it to be fireworks.

"I saw it very clearly, a bright green light with a tail of light travelling towards the bay and then a bright flash," she said.

Other observers mused it was "the aliens" and revenge for the supposed secrets at "Area 51" — the infamous US Air Force base that many believe secretly houses evidence of extra-terrestrial life.

Astronomer Martin George from the Queen Victoria Museum's Planetarium described the event as a "fireball" meteor, but said there remained uncertainty over its size.

"We think this object was at least about the size of a soccer ball; it may have been larger," he said.

"We are certainly talking about a significant event, something that we don't often see."

He said when the meteor faded from view it would have been about 20 to 30 kilometres above the earth's surface.

"The kind of object we saw last night, they are impossible to predict. You really have to be lucky to be outside at the right moment," he said.

Mr George said anyone searching for any remnants of the meteor would find it difficult, with minimal or no debris making it to the ground in events like this.

David Reneke, an astronomy writer, agreed the object was a "fireball" meteor, suggesting it could have been as small as a tennis ball.

"They are not rare, but you do get the occasional odd meteor that burns a little more brightly than others and actually melts as it comes through the sky," he said.

"They are generally on the larger size, maybe about the size of a tennis ball or even a little bit bigger."

Mr Reneke said the loud bang was the meteor exploding.

Mr Reneke said the skies were in the middle of a "meteor period", with more potentially to come.

"There could be more, you never know. You may go out and be lucky enough to see another one," he said.

"The earlier (in the night) it is, the more reports you are going to get."