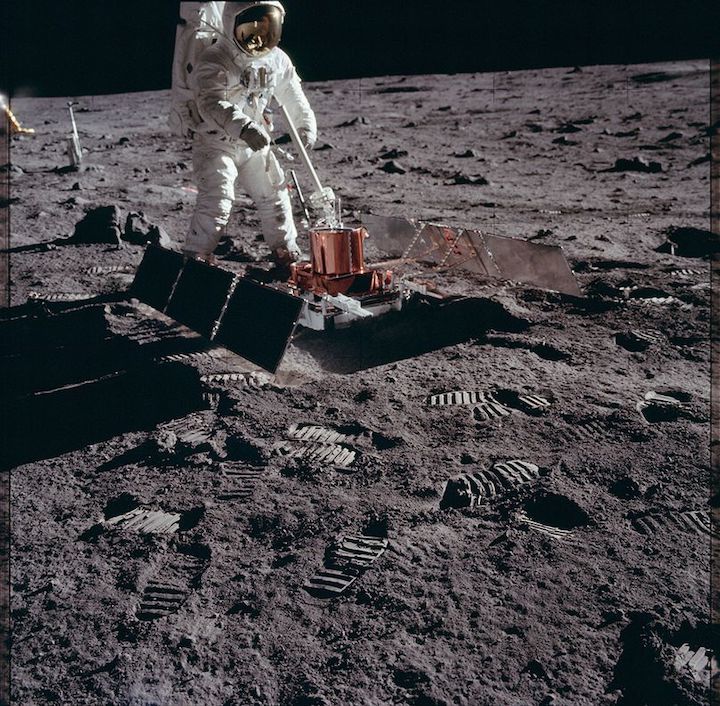 Future moon missions are at risk because of lunar soil. It seems harmless, but moon dust can actually damage scientific equipment and be harmful to human health: It is like a sticky powder made from shards of glass.

Neil Armstrong first stepped onto the moon 50 years ago, and his footprints in lunar soil will be there for million of years, according to NASA. There is no wind to blow the footprints away. When they returned to Earth, astronauts from the Apollo missions said that moon dust was sticky, abrasive and stinky.

The next astronauts who walk on the moon will have to contend with plenty of obstacles: the perils of space travel, exposure to high levels of radiation, and a lack of air, gravity, food and water. But dust is surprisingly high on the list of problems that need to be addressed for a successful visit to the moon.

The lunar surface is covered in regolith, a layer of powdery dust and broken rock, according to Britannica. Earth’s soil is a mix of minerals, organic materials, air and water. It’s a lovely layer of dirt where plants and animals thrive. The moon’s soil, on the other hand, is mostly made up of silicate minerals.

According to Popular Mechanics, the moon’s lack of atmosphere makes it susceptible to solar wind. Unlike the breeze we experience at home — there’s no air on the moon, after all — solar wind is a stream of charged particles from the upper layers of the sun. When these ions hit the moon, they make the soil electrostatically charged. Just like when clothing or hair has static cling on Earth, lunar soil clings to space suits.

The moon is frequently hit with meteorites, and with no atmosphere to soften the blow, their impact is more dramatic than here on Earth. Discover Magazine explains that billions of years of meteorite activity has kicked up lots of jagged dust. Grains of lunar dust are as small as the finest grains of sand— just 0.07 millimeters in diameter, on average. But grains of moon dust remain rough for a very long time because of a lack of erosion, so the dust is abrasive.

Dirty Problems on the Moon

Lunar soil causes a range of problems for astronauts and equipment. It can damage machines and scientific instruments. Discover Magazine points out that the first instrument placed on the moon, a seismometer on the Apollo 11 mission, quickly failed because dust caused it to overheat. More recently, China’s Yutu rover died in 2014, and moon dust was the likely culprit of the vehicle’s failure.

According to Wired, the “dusty dozen” Apollo astronauts tried to get rid of the pesky moon dust to keep the lunar module clean. After moon walks, they stomped their boots, brushed the dust off with bristle brushes and attempted to remove it with a vacuum cleaner. They wrapped garbage bags around their legs to try to contain the dust. On the Apollo 12 mission, astronaut Pete Conrad even stripped naked and stuffed his space suit into a pouch to keep the dust contained.

On the moon, dust is much more than a housekeeping chore. It is a dangerous feature of the landscape. In our brief visits during the Apollo era, it scratched astronauts’ visors and weakened the seals on their pressure suits.

A Health Hazard for Astronauts

Astronauts who have been to the moon say it smelled like gunpowder or some kind of combustion. In addition to damaging their spacesuits, the dust made their eyes water and throats sore, according to The New York Times. Lunar soil could be toxic to humans. Apollo 17’s Harrison Schmitt — the last person to set foot on the moon — described experiencing symptoms similar to hay fever after his moon walk. While it was only a mild allergic reaction, he was only there for 22 hours. Now NASA is preparingfor much longer visits, which would expose astronauts and their gear to the abrasive dust for much longer.

A 2018 study suggests that prolonged exposure to lunar dust could put astronauts at risk for developing serious illnesses. The experiment published in GeoHealth by Stony Brook University exposed human lung cells and mouse brain cells to simulated lunar soil. They found that when inhaled, the dust damaged the cells at a DNA level. The researchers warn that prolonged exposure to lunar dust could impair airway and lung function, and lead to bronchitis, inflammation in the lungs and increased cancer risk.

Solutions for Dealing With the Dust

The success of future moon missions will depend, in part, on finding solutions for dealing with the moon’s soil. According to Discover Magazine, researchers have proposed a special vacuum that uses magnets to catch the dust particles.

There aren’t many solutions yet, but Popular Science reports that nine different institutions are now studying moon rock samples to learn about the moon’s geology and chemistry. The samples have been sealed and stored for 50 years, and they are now being released for analysis with the latest technologies. Observations made on those samples will help guide future plansfor visiting the moon.