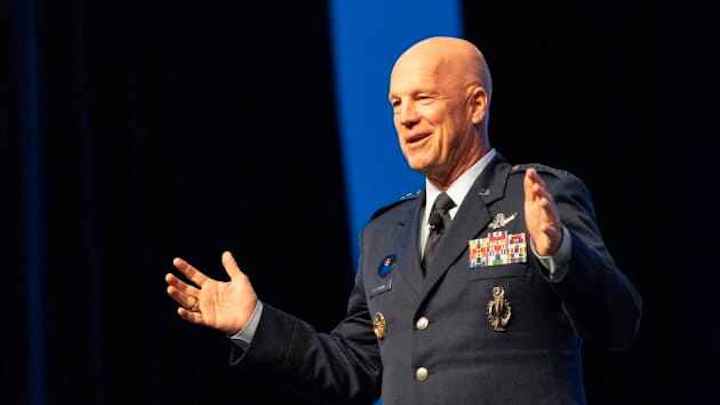 “All of the above, all of the above,” U.S. Air Force Gen. Jay Raymond said, when asked if he had met with the founders of Virgin Orbit, Blue Origin and SpaceX.

“I see great advantage in doing that, and I’m excited that they are doing what they are doing, because it’s going to pay huge dividends for us as well,” he said on the sidelines of the Air Force Association’s annual conference.

“Early in my career as a young captain, I was the commercial space officer for Air Force Space Command. So, I have been steeped in interfacing with the commercial business for many, many years,” he added.

Raymond was recently confirmed by the Senate to lead U.S. Space Command, a new combatant command that oversees the military’s missions in space. In addition, he also heads Air Force Space Command at Peterson Air Force Base in Colorado Springs, Colorado.

Meetings between top Pentagon brass and the billionaire leaders of these companies has been well documented, with both Branson and Musk having personally spoken to Air Force leaders in different contexts over the past year. Overall, the relationship between the military and these space companies is mutually beneficial: The U.S. enjoys the capabilities, or potential, of the rockets the companies are developing.

“Every sector has got some energy behind it,” Raymond said, giving examples ranging from NASA’s plans for Mars to the growth in the private sector.

At the same time, Blue Origin is building its New Glenn rocket to be one of the most powerful and capable in the world and hopes to compete for future Air Force contracts.

Finally, Virgin Orbit’s smaller LauncherOne rocket is expected to begin launching in the next few months. Because Virgin Orbit launches its rockets from under the wing of a modified Boeing 747, the military is particularly interested in the flexibility and speed with which the company could launch spacecraft.

This comes as the Pentagon lays the groundwork for President Donald Trump’s proposed Space Force, a new sister service branch that would stand alongside the Navy, Marine Corps, Army and Air Force. However, the creation of a sixth military branch, the first in 72 years, is dependent upon congressional approval.

Meanwhile, the Defense Department is asking for $14.1 billion in its fiscal 2020 budget request to fund space operations. The $14.1 billion would be allocated to fund several national security programs, from satellites to missile warning systems. Of the total, about $1.6 billion will fund improvements to space-based missile warning capabilities, a missing link in America’s layered missile defense system.

The Air Force is also seeking $72.4 million to establish a headquarters for the Space Force.

Raymond, in his conversation with CNBC, also noted his working relationship with SpaceX a decade ago, when he “was a young colonel.”

“I worked in an organization called the Office of Force Transformation,” Raymond said. “I was given a project that was known as TacSat-1 back in the day, and it was to get after this new business model in space. It was to build a new satellite really cheap, to build it to meet a specific war fighting requirement and launch it and do all of that within small numbers of millions of dollars,” he said.

TacSat-1 was a very small satellite that the Pentagon intended to launch in 2004.

SpaceX was developing its Falcon 1 rocket, the much smaller predecessor to its current Falcon 9 series of rockets. The Pentagon awarded SpaceX with the contract to launch TacSat-1, and the company expected to launch it on Falcon 1′s first flight. In the end, TacSat-1 did not fly due to delays in Falcon 1′s schedule, as well as the success of the TacSat-2 launch in 2006.