It could have been really bad. 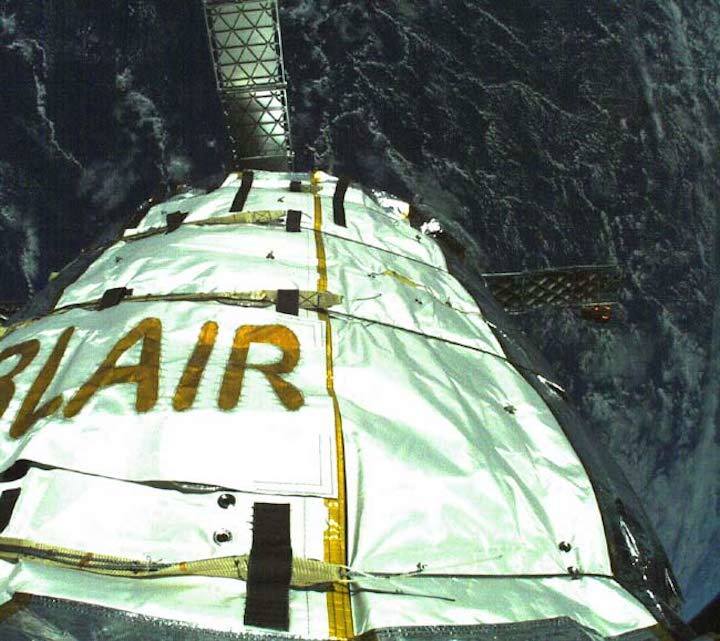 It could have been bad.

There was a 5.6% chance that two big pieces of space debris — Bigelow Aerospace's Genesis II experimental habitat and Russia's defunct Cosmos 1300 satellite — would collide high above Earth early this morning (Sept. 18). That warning came yesterday (Sept. 17) via Twitter from Bigelow Aerospace representatives, who cited analyses by the U.S. Air Force.

One-in-twenty odds are actually quite high in the satellite world. For perspective: Earlier this month, the European Space Agency (ESA) moved its Aeolus satelliteafter learning there was a 1-in-1,000 chance of a smashup with one of SpaceX's Starlink internet satellites. Indeed, the standard industry threshold for performing a collision-avoidance maneuver is a 1-in-10,000 probability.

But Genesis II and Cosmos 1300 ended up whizzing safely past one another, continuing silently on their circular paths about 320 miles (515 kilometers) above the planet.

"Per the Air Force, there was no collision between Genesis II and Cosmos 1300," Bigelow Aerospace said via Twitter this morning.

Cosmos 1300, also known as Tselina-D No. 30, weighs about 4,400 lbs. (2,000 kilograms). The spy satellite launched in August 1981 and was apparently decommissioned just a few months later. It has been space junk ever since.

The 3,000-lb. (1,360 kg) Genesis II launched in June 2007, on a mission to prove out Bigelow's expandable-habitat technology in the space environment. The 14-foot-long (4.4 meters) module was continuing work started by the similarly sized Genesis I, which arrived in Earth orbit a year earlier. (Expandable habitats launch in a highly compressed configuration and are inflated upon reaching space. They can therefore provide much more internal volume per unit launch mass than traditional aluminum modules, Bigelow Aerospace representatives say.)

Both Genesis habitats sent data down to Earth for about 2.5 years before going silent. Both are still up there, and there's no way to bring them down; neither Genesis I nor Genesis II has a propulsion system, so each craft will deorbit passively.

"Genesis I & II EOL [end-of-life] decommissioning plan is to burn up on re-entry into the atmosphere. This situation is one example why what is launched into space is so important to our space future," Bigelow Aerospace representatives tweeted today.

"Anything we launch from here on out will have prop. [propulsion] capability. B330 has two dissimilar propulsion units, more than capable of performing end-of-life maneuvers. Destinations are not the future worry. They will be few and far between compared to the number of satellites," Bigelow Aerospace tweeted today.

The B330 is Bigelow's flagship habitat, a huge module the company is developing for potential use in Earth orbit and in deep space. The company hopes NASA selects the 55-foot-long (16.8 m) B330 for use with the Lunar Gateway, the moon-orbiting space station whose assembly is scheduled to start in 2022.

And there's a decent chance that the B330 will be part of the Gateway someday. In 2016, Bigelow was one of six companies to get funding from NASA's Next Space Technologies for Exploration Partnerships (NextSTEP) program to develop ground prototypes of deep-space habitats. As part of the NextSTEP work, NASA recently conducted a two-week ground test of the B330 at Bigelow headquarters in North Las Vegas.

Bigelow isn't alone in prioritizing maneuverability for future spacecraft. This week, the Space Safety Coalition issued its "Best Practices for Sustainability of Space Operations," a document designed to help reduce the threat posed by space junk. One key guideline is the recommendation that all satellites whose orbital altitude exceeds 250 miles (400 km) "should be designed to be capable of performing timely and effective collision avoidance maneuvers sufficient to reduce the probability of collision per conjunction to less than 0.0001." (Below this altitude, drag from Earth's atmosphere brings craft down fairly quickly.)

We need to be planning ahead in such ways to ensure the space-junk problem doesn't ground us, many exploration advocates stress. More and more satellites are going up as launch and manufacturing costs go down, after all, and that trend will only continue to accelerate.

And it would take only a few big collisions to make the debris issue considerably worse. For example, the February 2009 collision between the United States' active Iridium 33 communications satellite and the dead Russian craft Cosmos 2251 had created 1,800 new pieces of tracked debris by October of that year — about 10% of the tracked population of Earth-orbiting objects at the time.

In the worst-case scenario, known as the Kessler syndrome, such crashes eventually lead to a cascade of collisions that renders certain orbits all but unusable.