Here’s everything you need to know about the first of two annular solar eclipses crossing Asia over the next year.

A “ring of fire” will appear over parts of the Middle East and Asia this December. The spectacle — the final solar eclipse of 2019 — will be visible from a 100-mile-wide path of annularity that stretches from Saudi Arabia to the South Pacific islands of Guam on December 26, 2019.

The eclipse will occur the day after Christmas Day (that’s Boxing Day to British and Canadian readers). But is an annular solar eclipse a celestial gift worth traveling across the world to see?

What is an annular solar eclipse?

It’s actually a partial eclipse with a dose of beautiful symmetry. Because the moon is farther away than usual in its orbit around Earth, it doesn’t fully cover the disk of the Sun. So an annular solar eclipse must be viewed at all times using solar filters, eclipse glasses, or handheld solar viewers.

Where is this eclipse taking place?

The biggest cities that will see the annular eclipse include Kozhikode and Coimbatore in southern India, Jaffna and Trincomalee in Sri Lanka, Sibolga, Batam and Singkawang in Indonesia, and Singapore.

The absolute maximum — where the Sun’s perfect ring around the Moon lasts 3 minutes, 40 seconds — will happen southwest of Singapore. 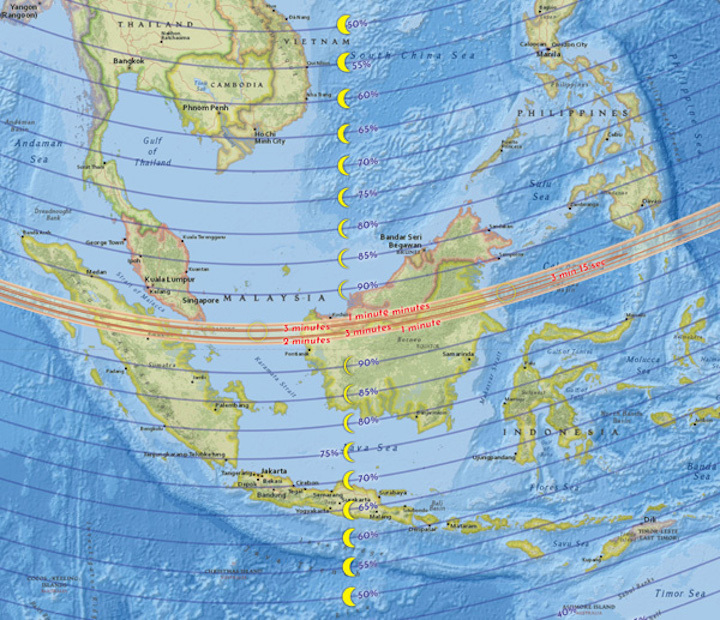 The longest annularity is in southeast Asia, though cloud cover is expected.
Michael Zeiler

What are the weather prospects?

The biggest issue isn’t accessing the annular eclipse path, it’s clouds. The likelihood of clear skies will draw most to the Arabian Peninsula or southern India. “The most important consideration for first-timers is to find a location where the sky is clear enough to be able to view the transition from the partial phases to the annular one,” says Xavier Jubier, an eclipse-chaser and member of the International Astronomical Union’s Working Group on Solar Eclipses. Jubier develops interactive Google Maps of solar eclipses. 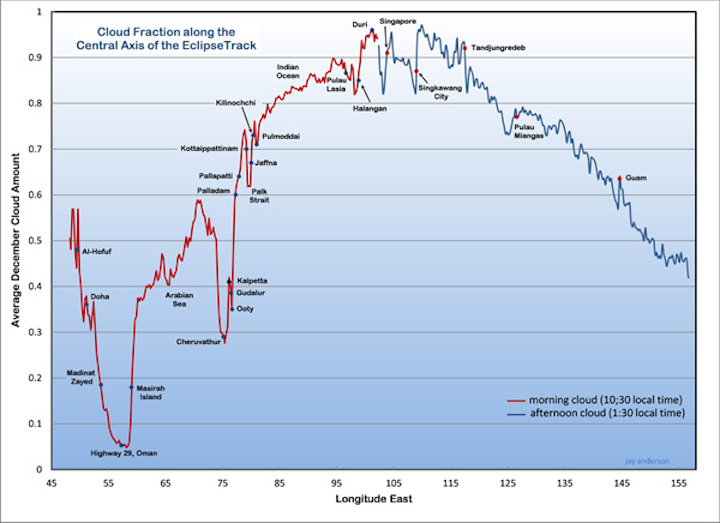 According to Jay Anderson on eclipsophile.com, the best place for a sure-fire “ring of fire” is, in fact, Oman. “The deserts of Oman have the lowest cloud frequency, only 7%, probably the lowest value these studies have reported in the past 40 years,” he writes.

The biggest prize of all: Sunrise in Saudi Arabia

The annular solar eclipse begins at sunrise in the desert of Saudi Arabia, an area with outstanding prospects for clear skies.

“It’s a prime opportunity to witness one of the most dramatic sights of all, the annular eclipse extremely distorted by atmospheric refraction and, depending on sky transparency, perhaps viewable with the naked eye,” says Michael Zeiler, an eclipse cartographer who runs GreatAmericanEclipse.com. 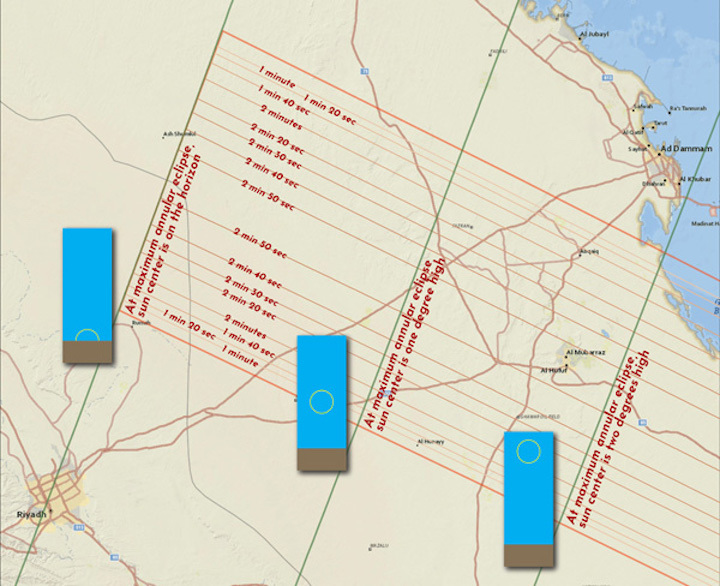 Here’s an excellent and detailed map for hunters of the annular sunrise. The map is unique for taking into account atmospheric refraction, which extends the line of beginning of eclipse about 100 km to the west. The highway from Riyadh to Ad Damman is ideal.
Michael Zeiler

“This is truly a scene evocative of a science fiction movie,” Zeiler adds. “The only circumstance that I would travel globally for an annular solar eclipse is the chance to view it during sunrise or sunset.”

Such an opportunity for a sunrise annular solar eclipse hasn’t been possible since May 10, 2013 when several eclipse astrophotographers captured an amazing video of the rising annular eclipse in the Australian outback.

But the weather prospects make some hesitant. “I wanted to attempt Saudi Arabia at sunrise, but given the context and the likelihood of a hazy or dusty sky for an eclipse on the horizon, relocating is wise,” says Jubier. “Mobility being a bit too limited in Qatar and the Sun already too high, the United Arab Emirates is now likely.”

“If I had more time I would have also considered Oman as there is lots to do and see outside the annular,” Jubier adds. For stargazing, the deserts of Oman and its fabulous Jebel Shams mountain is hard to beat.

A similar chance for a rising annular eclipse will occur on June 10, 2021 in southern Canada. “[There,] the chances for success are less because of the weather and the fact that the optimum viewing area for the sunrise annulus is heavily forested,” says Zeiler. “But I will be there to try anyway. I might try to get a seat on an aircraft for this event to rise above the trees and forest.”

Where to go in Asia

There are other places to consider going on December 26, 2019. “The Indian coast along the Arabian Sea also offers excellent cloud statistics, with a greater opportunity to relocate if weather is unfavourable,” Anderson adds on eclipsophile.com. That’s why Kozhikode, where the eclipse will be at an altitude of 33°, is going to be busy.

Elsewhere in Asia, cloud cover is predicted, though the Sun is at least high in the sky, which will improve the chances of a sighting. “I’d recommend going near a large body of water, either a big lake or along the sea shore,” says Jubier. 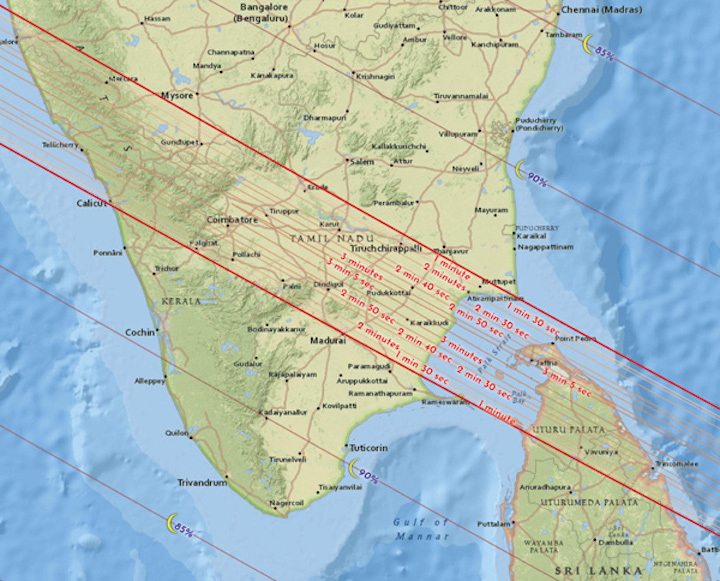 The west coast of southern India is predicted to have a good chance of clear skies for an eclipse at 33°.
Michael Zeiler

Wherever viewers decide to go, the closer they are to the centerline of the eclipse path, the longer the eclipse will last and — since this is an annular eclipse — the more precise the “ring of fire” will look.

The moon’s antumbral shadow will only take a few minutes to pass over any location on the eclipse path. For those who see it, this eclipse will be a moving spectacle.