The black hole is 250 million light-years from Earth, at the center of a galaxy called GSN 069. Recent observations revealed powerful X-ray bursts emanating from the center of GSN 069 approximately every 9 hours, suggesting the galaxy's central black hole devours a lot of material on a regular basis. This behavior has never been detected from a supermassive black hole before now, according to a statement from the Chandra X-ray Observatory.

"This black hole is on a meal plan like we've never seen before," Giovanni Miniutti, lead author of the study and an astronomer at the European Space Agency's (ESA) Center for Astrobiology in Spain, said in the statement. "This behavior is so unprecedented that we had to coin a new expression to describe it: 'X-ray quasi-periodic eruptions.'"

Using NASA's Chandra X-ray Observatory and ESA's XMM-Newton telescope, researchers found that this black hole contains about 400,000 times the mass of the sun. In turn, they estimate that it consumes roughly four moons' worth of material three times a day, which is nearly "a million billion billion pounds" per feeding, according to the statement.

The black hole at the center of GSN 069 is fairly small for being a supermassive black hole, which can have a mass of millions or even billions of suns. Larger black holes generally exhibit less frequent fluctuations in brightness, with outbursts every few months or even years. This may explain why X-ray quasi-periodic eruptions weren't observed before now, the researchers said.

The black hole's extraordinary eating schedule was first detected by the XMM-Newton telescope, which observed two bursts on Dec. 24, 2018, and another five outbursts between Jan. 16 and 17, 2019. Less than a month later, Chandra revealed an additional three outbursts on Feb. 14. 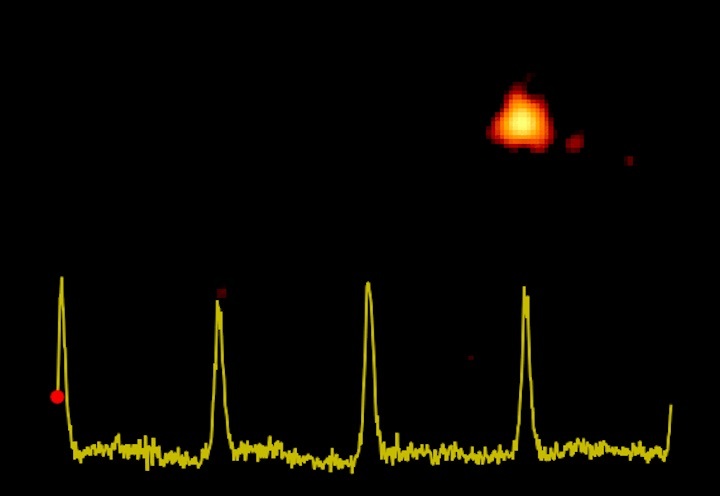 "By combining data from these two X-ray observatories, we have tracked these periodic outbursts for at least 54 days," Richard Saxton, co-author of the study from ESA's Astronomy Center in Spain, said in the statement. "This gives us a unique opportunity to witness the flow of matter into a supermassive black hole repeatedly speeding up and slowing down."

During these outbursts, researchers found X-ray emissions become about 20 times brighter and the material falling toward the black hole gets 2.5 times hotter. However, the origin of the hot gas flowing into the black hole remains a mystery, the researchers said.

"We think the origin of the X-ray emission is a star that the black hole has partially or completely torn apart and is slowly consuming bit by bit," Margherita Giustini, co-author of the study and researcher from ESA's Center for Astrobiology, said in the statement. "But as for the repeating bursts, this is a completely different story whose origin needs to be studied with further data and new theoretical models."

Their findings were published Sept. 11 in the journal Nature.