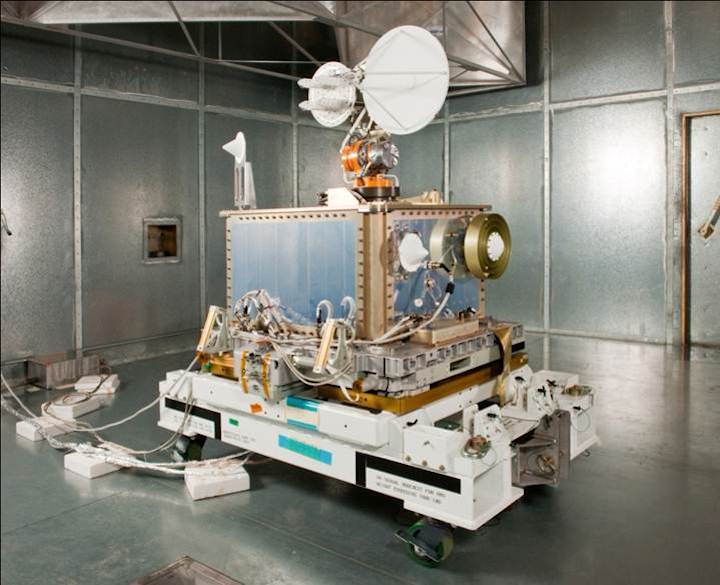 This photo was taken of NASA's Space Communications and Navigation Testbed before launch. Currently affixed to the International Space Station, the SCaN Testbed is used to conduct a variety of experiments with the goal of further advancing other technologies, reducing risks on other space missions, and enabling future mission capabilities.
Credits: NASA 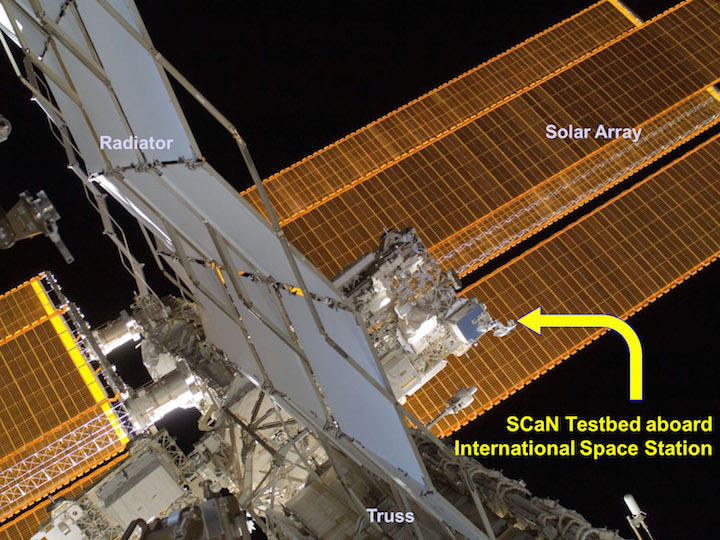 The SCaN Testbed payload aboard the space station. In April 2013, it began conducting experiments after completing its checkout and commissioning operations.
Credits: NASA
-

To understand cognitive radio, it’s easiest to start with ground-based applications. In the U.S., the Federal Communications Commission (FCC) allocates portions of the electromagnetic spectrum used for communications to various users. For example, the FCC allocates spectrum to cell service, satellite radio, Bluetooth, Wi-Fi, etc. Imagine the spectrum divided into a limited number of taps connected to a water main.

What happens when no faucets are left? How could a device access the electromagnetic spectrum when all the taps are taken?

Software-defined radios like cognitive radio use artificial intelligence to employ underutilized portions of the electromagnetic spectrum without human intervention. These “white spaces” are currently unused, but already licensed, segments of the spectrum. The FCC permits a cognitive radio to use the frequency while unused by its primary user until the user becomes active again.

For NASA, the space environment presents unique challenges that cognitive radio could mitigate. Space weather, electromagnetic radiation emitted by the sun and other celestial bodies, fills space with noise that can interrupt certain frequencies.

“Glenn Research Center is experimenting in creating cognitive radio applications capable of identifying and adapting to space weather,” said Rigoberto Roche, a NASA cognitive engine development lead at Glenn. “They would transmit outside the range of the interference or cancel distortions within the range using machine learning.”

In the future, a NASA cognitive radio could even learn to shut itself down temporarily to mitigate radiation damage during severe space weather events. Adaptive radio software could circumvent the harmful effects of space weather, increasing science and exploration data returns.

The Space Communications and Navigation (SCaN) Testbed aboard the International Space Station provides engineers and researchers with tools to test cognitive radio in the space environment. The testbed houses three software-defined radios in addition to a variety of antennas and apparatus that can be configured from the ground or other spacecraft.

“The testbed keeps us honest about the environment in orbit,” said Dave Chelmins, project manager for the SCaN Testbed and cognitive communications at Glenn. “While it can be simulated on the ground, there is an element of unpredictability to space. The testbed provides this environment, a setting that requires the resiliency of technology advancements like cognitive radio.”

Chelmins, Rioche and Briones are just a few of many NASA engineers adapting cognitive radio technologies to space. As with most terrestrial technologies, cognitive techniques can be more challenging to implement in space due to orbital mechanics, the electromagnetic environment and interactions with legacy instruments. In spite of these challenges, integrating machine learning into existing space communications infrastructure will increase the efficiency, autonomy and reliability of these systems.

The SCaN program office at NASA Headquarters in Washington provides strategic and programmatic oversight for communications infrastructure and development. Its research provides critical improvements in connectivity from spacecraft to ground.