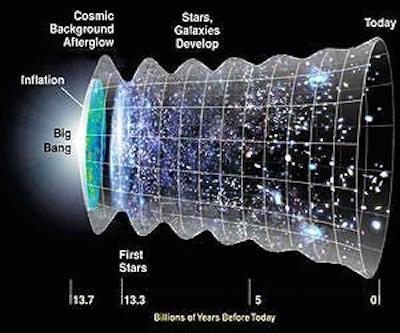 Although for five decades, the Big Bang theory has been the best known and most accepted explanation for the beginning and evolution of the Universe, it is hardly a consensus among scientists.

Brazilian physicist Juliano Cesar Silva Neves part of a group of researchers who dare to imagine a different origin. In a study recently published in the journal General Relativity and Gravitation, Neves suggests the elimination of a key aspect of the standard cosmological model: the need for a spacetime singularity known as the Big Bang.

In raising this possibility, Neves challenges the idea that time had a beginning and reintroduces the possibility that the current expansion was preceded by contraction. "I believe the Big Bang never happened," the physician said, who Works as a researcher at the University of Campinas's Mathematics, Statistics and Scientific Computation Institute (IMECC-UNICAMP) in Sao Paulo State, Brazil.

For Neves, the fast spacetime expansion stage does not exclude the possibility of a prior contraction phase. Moreover, the switch from contraction to expansion may not have destroyed all traces of the preceding phase.

The article, which reflects the work developed under the Thematic Project "Physics and geometry of spacetime", considers the solutions to the general relativity equations that describe the geometry of the cosmos and then proposes the introduction of a "scale factor" that makes the rate at which the Universe is expanding depend not only on time but also on cosmological scale.

"In order to measure the rate at which the Universe is expanding with the standard cosmology, the model in which there's a Big Bang, a mathematical function is used that depends only on cosmological time," said Neves, who elaborated the idea with Alberto Vazques Saa, a Full Professor at IMECC-UNICAMP and also the supervisor for Neves' postdoctoral project, funded by the Sao Paulo Research Foundation - FAPESP.

With the scale factor, Big Bang itself, or cosmologic singularity, ceases to be a necessary condition for the cosmos to begin universal expansion. A concept from mathematics that expresses indefiniteness, singularity was used by cosmologists to characterize the "primordial cosmologic singularity" that happened 13.8 billion years ago, when all the matter and energy from the Universe were compressed into an initial state of infinite density and temperature, where the traditional laws of physics no longer apply.

The Big Bang Theory has its origins in the late 1920s when US astronomer Edwin Hubble discovered that almost all galaxies are moving away from each other at ever-faster velocities.

"Eliminating the singularity or Big Bang brings back the bouncing Universe on to the theoretical stage of cosmology. The absence of a singularity at the start of spacetime opens up the possibility that vestiges of a previous contraction phase may have withstood the phase change and may still be with us in the ongoing expansion of the Universe," Neves said.

Neves conceptualizes that "bouncing cosmology" is rooted in the hypothesis that Big Crunch would give way to an eternal succession of universes, creating extreme conditions of density and temperature in order to instigate a new inversion in the process, giving way to expansion in another bounce.

Vestiges of contraction
Black holes are the starting point of Neves' investigations about "Bouncing Universe". "Who knows, there may be remains of black holes in the ongoing expansion that date from the prior contraction phase and passed intact through the bottleneck of the bounce," he said.

Consisted of the imploded core remaining after a giant star explodes, black holes are a kind of cosmic object whose core contracted to form a singularity, a point with infinite density and the strongest gravitational attraction known to exist. Nothing escapes from it, not even light.

According to Neves, a black hole is not defined by singularity, but rather by an event horizon, a membrane that indicates the point of no return from which nothing escapes the inexorable destiny of being swallowed up and destroyed by the singularity.

"Outside the event horizon of a regular black hole, there are no major changes, but inside it, the changes are deep-seated. There's a different spacetime that avoids the formation of a singularity."

The scale factor formulated by Neves and Saa was inspired by US physicist James Bardeen. In 1968, Berdeen used a mathematical trick to modify the solution to the general relativity equations that describe black holes.

The trick consisted of thinking of the mass of a black hole not as a constant, as had previously been the case, but as a function that depends on the distance to the center of the black hole.

With this change, a different black hole, termed a regular black hole, emerged from the solution to the equations. "Regular black holes are permitted, since they don't violate general relativity. The concept isn't new and has frequently been revisited in recent decades," said Neves.

Since the insertion of a mathematical trick into the general relativity equations could prevent the formation of singularities in regular black holes, Neves considered creating a similar artifice to eliminate the singularity in a regular bounce.

In modern science, a theory is worthless if cannot be verified, however beautiful and inspiring it may be. How do you test the hypothesis of a Big Bang that did not start with a singularity?

"By looking for traces of the events in a contraction phase that may have remained in the ongoing expansion phase. What traces? The candidates include remnants of black holes from a previous phase of universal contraction that may have survived the bounce," Neves said.