THE ASTOUNDING ENGINEERING BEHIND THE WORLD'S LARGEST OPTICAL TELESCOPE 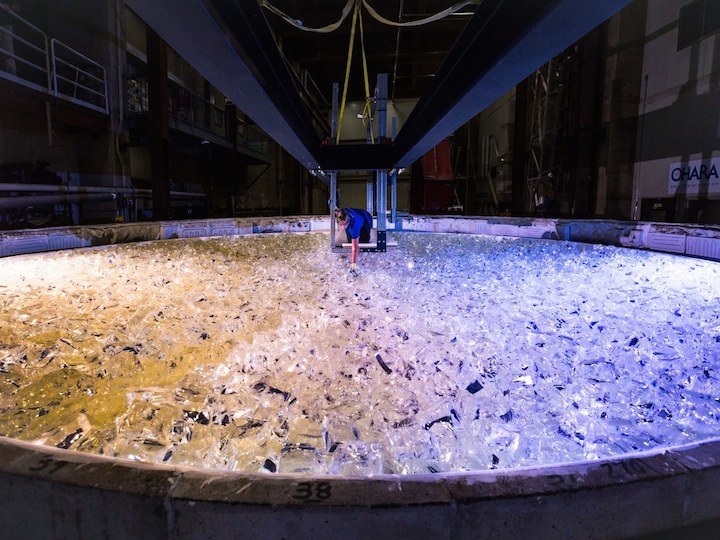 IT'S EASY TO miss the mirror forge at the University of Arizona. While sizable, the Richard F. Caris Mirror Laboratory sits in the shadow of the university's much larger 56,000-seat football stadium. Even its most distinctive feature—an octagonal concrete prominence emblazoned with the school's logo—looks like an architectural feature for the arena next door. But it's that tower that houses some of the facility's most critical equipment.

Inside the lab, a narrow, fluorescent-green staircase spirals up five floors to the tower's entrance. I'm a few steps from the top when lab manager Stuart Weinberger asks, for the third time, whether I have removed everything from my pockets.

"Glasses, keys, pens. Anything that could fall and damage the mirror," he says. Weinberger has agreed to escort me to the top of the tower and onto a catwalk some 80 feet above a mirror 27.5 feet in diameter. A mirror that has already taken nearly six years—and $20 million—to make. "Most people in the lab aren't even allowed up here," he says. That explains Weinberger's nervousness about the contents of my pockets (which are really, truly empty), and why he has tethered my camera to my wrist with a short line of paracord. 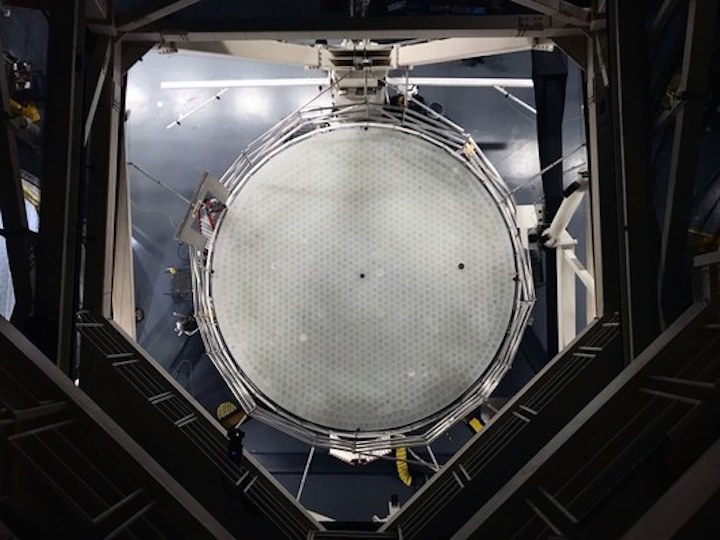 The view of GMT's second mirror segment from the top of the Mirror Lab's test tower.

The disc of glass below me is one of seven mirrors that will eventually comprise the Giant Magellan Telescope. When it turns on in full force in 2025, at Las Campanas Observatory in Chile's Atacama Desert, the GMT will be the largest optical observatory in the world. Its mirrors, each of which weighs roughly 17 tons, will be arranged in a flower-petal configuration, with six asymmetrical mirrors surrounding a central, symmetrical segment. Together, they will span some 80 feet (twice the diameter of existing optical telescopes) and possess a total area of 4,000 square feet (about the area of two singles tennis courts). With a resolving power 10 times that of the Hubble Space Telescope, the GMT is designed to capture and focus photons emanating from galaxies and black holes at the fringes of the universe, study the formation of stars and the worlds that orbit them, and search for traces of life in the atmospheres of habitable-zone planets.

But before GMT can do any of that, the scientists and engineers at the Mirror Lab need to manufacture these colossal slabs of glass. And doing so, as you might expect, is a truly monumental task.

"These are some of the most difficult mirrors ever manufactured. They're off-axis, they're aspheric, very large and ultra precise," Mirror Lab associate director Jeff Kingsley tells me after I descend from the tower. "Our goal is to get to a point where it takes four years, start to finish, for each mirror." The first mirror, though, took close to a decade to produce. The second segment—the one Weinberger just risked me destroying—started production in January of 2012 and won't be finished until 2019. 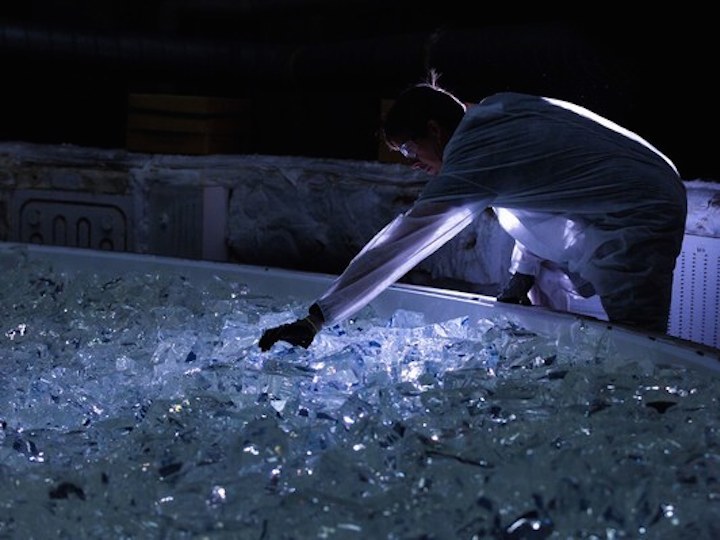 Mirror Lab staff review the glass placed in the mold, checking for space for the last few pieces of glass for GMT mirror 5.

The Mirror Lab currently houses four GMT mirrors in various stages of development, with the latest beginning its arduous production process just this week. The first step is to cast the mirror by loading 20 tons of E6 borosilicate glass blocks into an immense, rotating furnace—by hand. Inside, 1,700 hexagonal pillars form a honeycomb-shaped mold that itself took six months to build. Over the course of several days, the furnace heats to over 2,100 degrees Fahrenheit and revs up to just shy of five rotations per minute. The glass, now liquefied, flows into the negative space of the honeycomb, while the rotation forces the molten sludge to the edges of the mold, giving the mirror its concave shape.

It takes three months for the furnace to return to room temperature. Only then can lab staff remove the mirror, stand it upright, and, with the help of a jury-rigged elevator system, give the thing a high-pressure bath. "We actually blast it with a car-wash wand," Kingsley says. "We had a grad student from the university's mining department come and optimize it for cleaning the glass."

From there, lab members flip the mirror face-down onto a giant, air-powered hovercraft and transfer it to the facility's central chamber, which houses two mirror-polishing stations. These remove about half a centimeter of glass from the back of the cast. Once it's smooth, Mirror Lab staff secure 165 load-spreaders to the mirror's backside—where the actuators will attach when the scope is finally erected in the Atacama Desert.

Then the lab members flip the mirror face-up—and the difficult work begins.

The GMT's six outer mirror segments—the petals on the flower, if you will—are all irregularly shaped. Their contours are topographically identical to a Pringle potato chip, albeit far more subtle; the curves are impossible to spot with the naked eye, but they make shaping the mirror a royal pain in the ass.

“We want the telescope to be limited by fundamental physics—the wavelength of light and the diameter of the mirror—not the irregularities on the mirror’s surface,” says optical scientist Buddy Martin, who oversees the lab's grinding and polishing operations. By “irregularities,” he’s talking about defects bigger than 20 nanometers—about the size of a small virus. But when the mirror comes out of the mold, its imperfections can measure a millimeter or more. 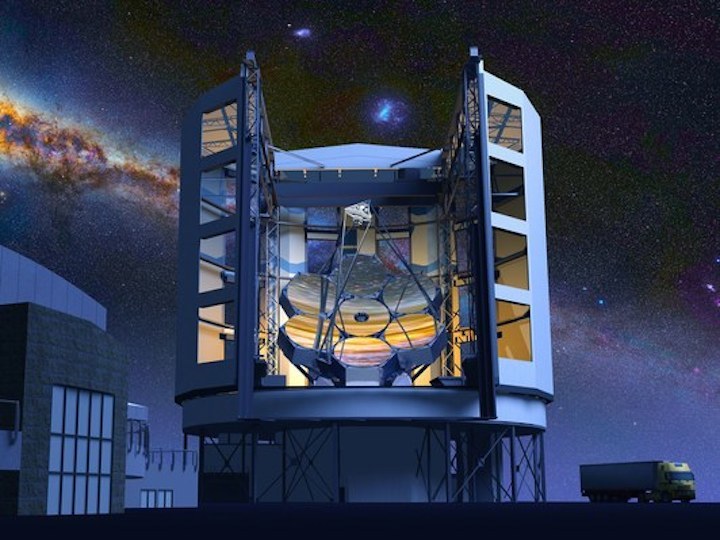 An artist's rendering of the completed Giant Magellan Telescope.

A few passes of coarse machining can whittle those imperfections to a scale of 20 microns—about a quarter of the width of a human hair. But those errors are still 1,000 times larger than they should be.

It's here that the Mirror Lab's tower comes into play. At its peak, mounted to the same scaffolding I just stood on, is a suite of lasers and interferometers that act like a tape measure for those sub-micron imperfections. The measuring process is so sensitive, the mirror has to sit on a pneumatic system to decouple it from the building's movement. "There's vibrations from the football stadium, traffic on adjacent streets, helicopters on their way to the hospital," Martin says. "You can't feel them standing here, but the measurements are very sensitive."

Only then is a mirror permitted to depart the lab. The first of GMT's segments left the facility in September, to make room for its incoming siblings. Today, it sits in a temporary storage facility near Tucson International Airport, awaiting shipment to the Atacama desert, where a 100-nanometer-thin coating of aluminum will complete its long transformation from a 20-ton heap of glass chunks into a cosmos-combing reflective surface.

"You know, you could argue that we don't even make mirrors here," Martin says. "All we make are big pieces of glass."

The Giant Magellan Telescope will be located at Cerro Las Campanas at Las Campanas Observatory in the Atacama Desert of Chile, about two hours drive from the coastal town of La Serena. The altitude of the site is 2500 meters (8200 ft) and it has over 300 clear nights a year. The site is almost completely barren of vegetation due to lack of rainfall. The images here show the progress of construction since the site was levelled in 2012. Click the image to see the caption. 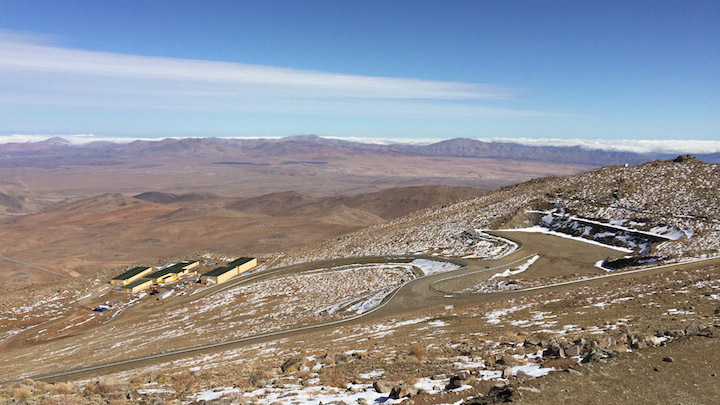 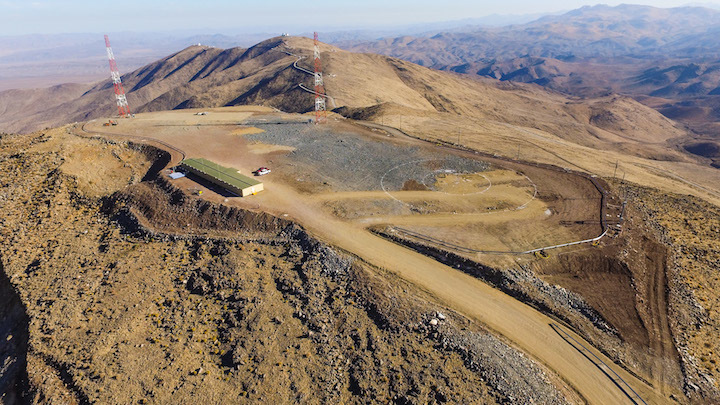 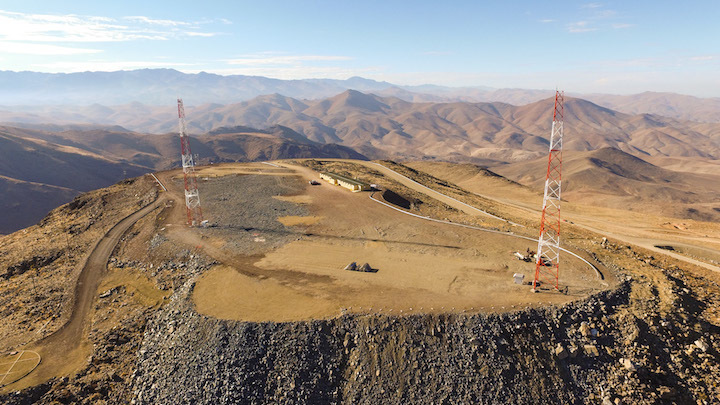 The GMT’s mirrors are being produced by the Richard F. Caris Mirror Lab of the Steward Observatory of the University of Arizona. The GMT’s 24.5 meter primary mirror will be comprised of seven separate 8.4 meter diameter segments. Each of the primary mirror segments weighs approximately 17 tons and takes a year to cast and cool. After casting, the fabrication of each segment requires more than three years of surface generation and meticulous polishing. Learn more about the mirror production process in our FAQs. 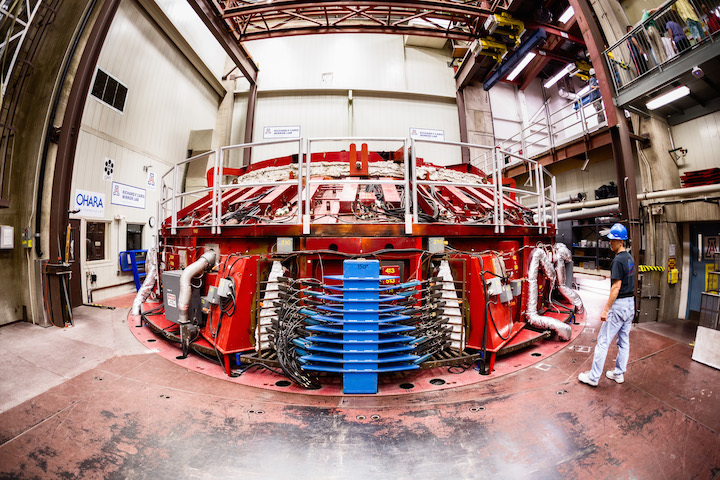 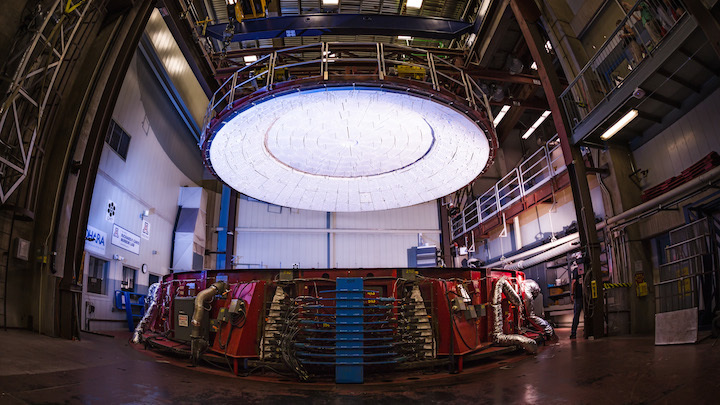 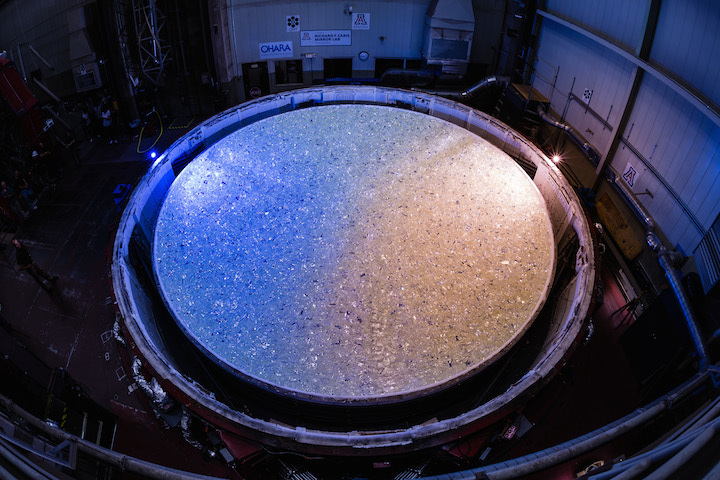 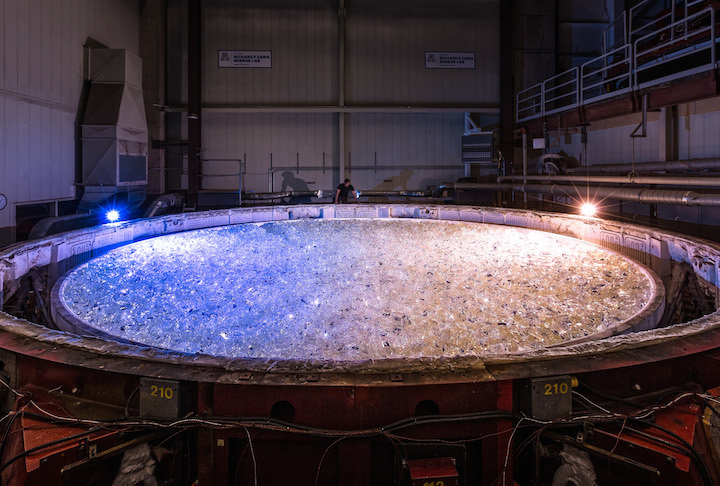 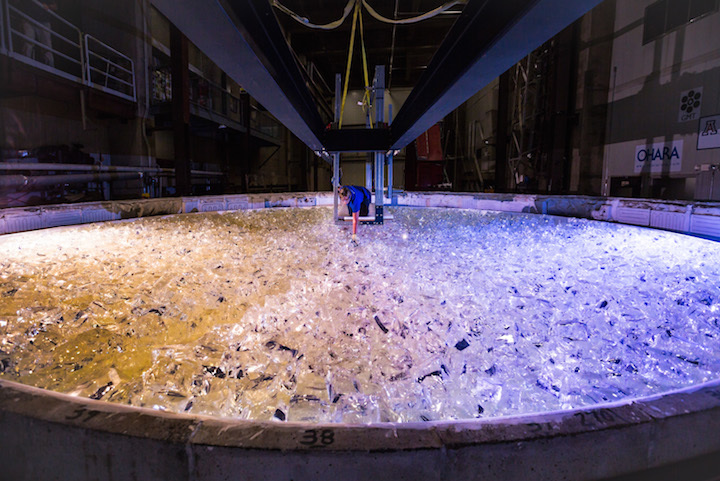 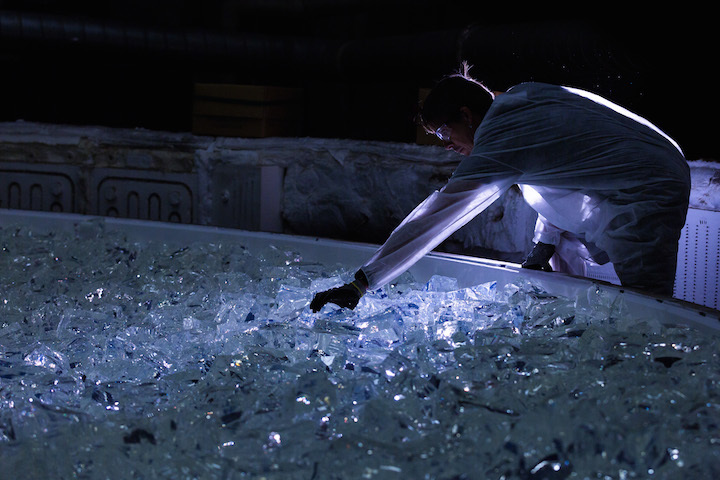 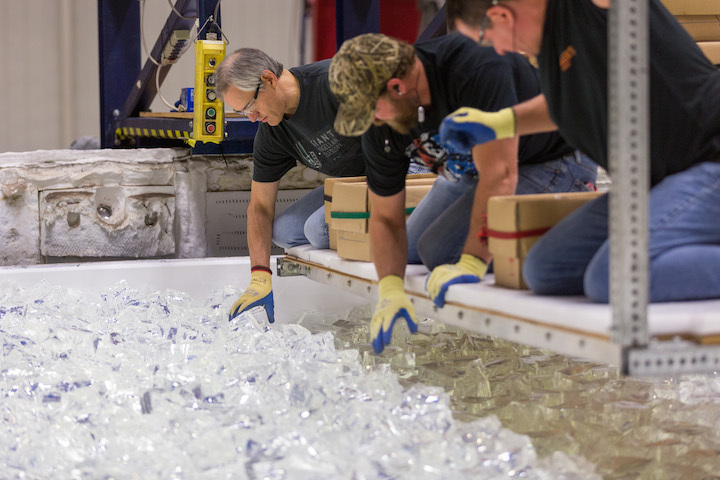 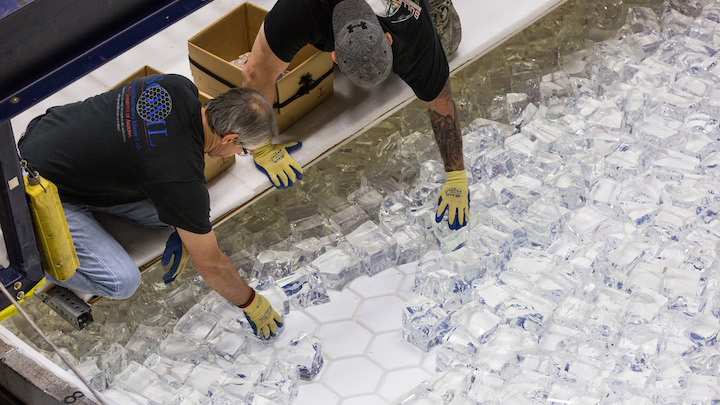 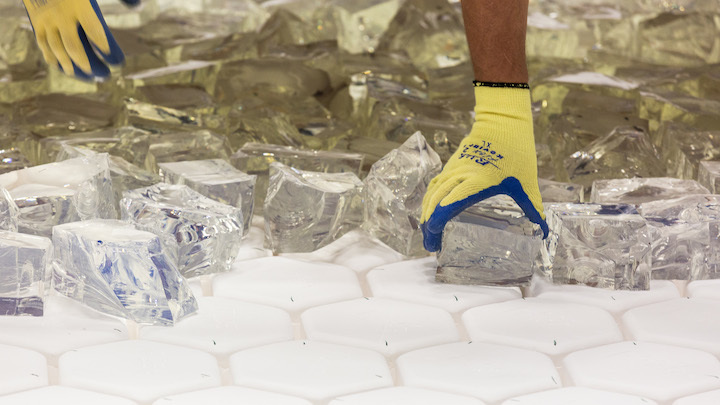 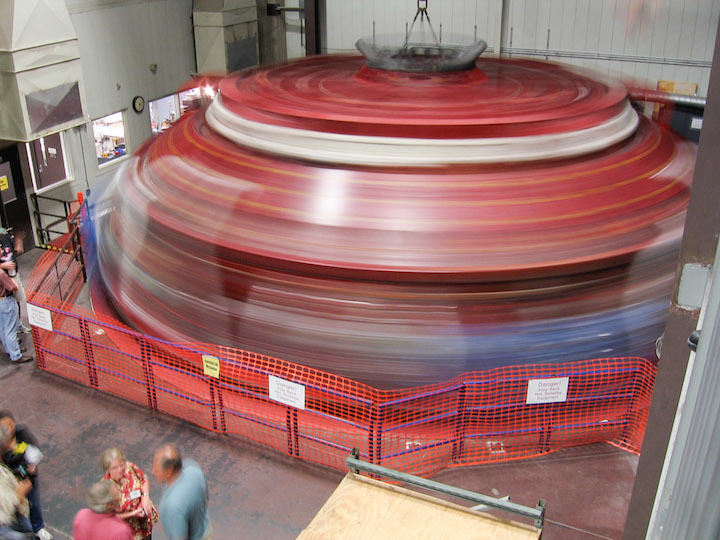 Renderings of the Giant Magellan Telescope showing the design of the telescope, enclosure and summit in 2015.
Produced by Mason Media Inc. 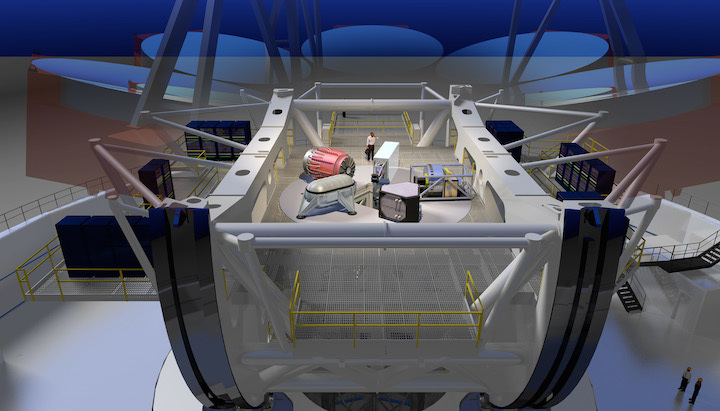 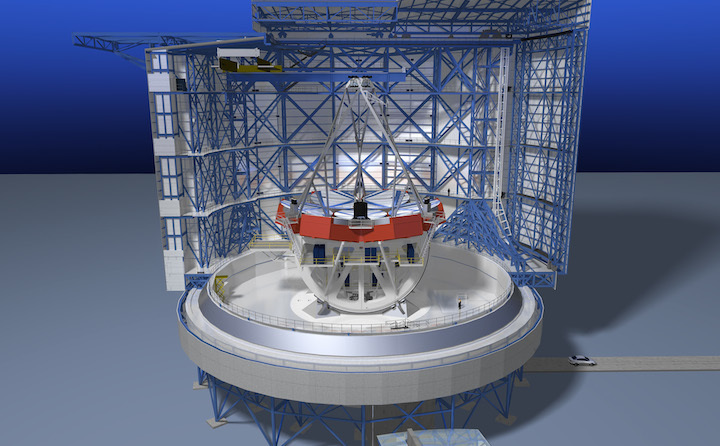 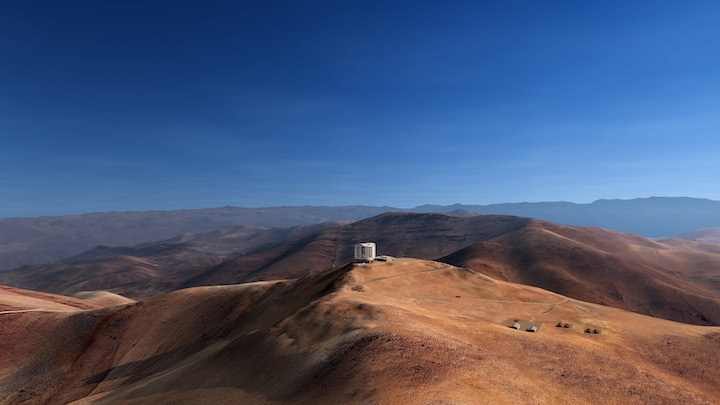 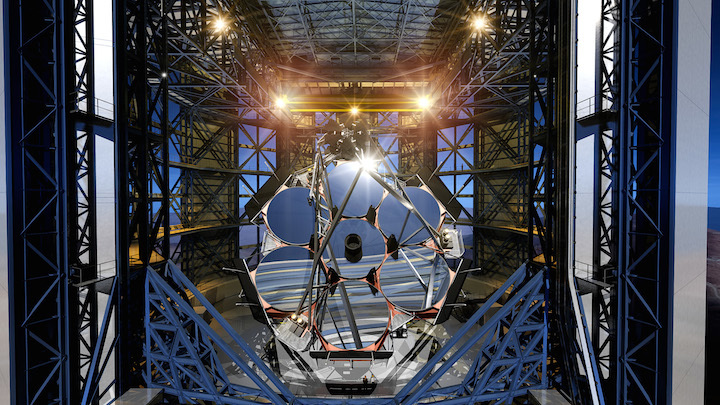 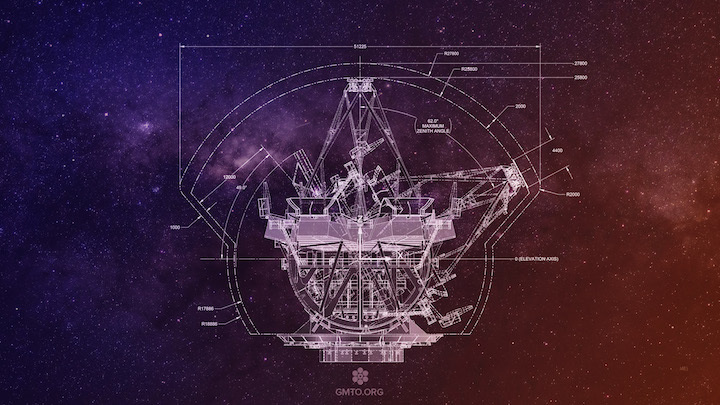 Pasadena, Calif. – November 29, 2017 – The Giant Magellan Telescope Organization (GMTO) today announced that Arizona State University (ASU) has joined the mission to build the world’s largest telescope, the Giant Magellan Telescope (GMT). The project’s partnership with ASU will aid in GMT’s mission of discovery and its quest to answer some of the most fundamental questions of all: where did we come from, and are we alone in the Universe. The GMT will probe the atmospheres of planets around other stars for signs of biochemistry, and will look back to the early universe to understand how the first stars and galaxies formed.

“ASU’s research expertise in the study of planets will be a great asset to the GMT project going forward,” said Robert N. Shelton, President of GMTO. “The involvement of the ASU team with the James Webb Space Telescope and with the investigation of the early universe is also a critical addition to the knowledge base of the project.”

ASU’s School of Earth and Space Exploration (SESE) has established itself as a leading voice in the fields of exoplanets and space exploration. The mission of the school, to combine the strengths of science, engineering, and education to set the stage for a new era of exploration, aligns well with GMT’s mission of discovery. Faculty and students at the school are expected to work with the GMT project over the coming years; particularly Dr. Lindy Elkins-Tanton, SESE Director – a world leader in the study of terrestrial planetary formation and the principal investigator for the NASA Psyche mission to explore a metal asteroid – and Dr. Rogier Windhorst, ASU Regents Professor and interdisciplinary scientist for the James Webb Space Telescope.

“Major scientific advances are created by new instrumentation, and to be serious about studying our universe, we need to join in these partnerships,” said Elkins-Tanton. “I’m excited that ASU has taken this leap institutionally to be a part of what’s going to be a beautiful and transformational instrument.”

The GMT will combine the light from seven 8.4 meter mirrors to create a telescope with an effective aperture 24.5 meters in diameter (80 feet). With its unique design, the GMT will produce images that are 10 times sharper than those from the Hubble Space telescope in the infrared region of the spectrum. GMT’s partners will play a major role in the discoveries that will be made on the telescope, which is expected to see first light in 2023.

“Many of humankind’s greatest discoveries have happened in preparation for space exploration,” said Sethuraman Panchanathan, executive vice president of Knowledge Enterprise Development and chief research and innovation officer at ASU. “Joining the GMT project helps our extraordinary astronomy and space science faculty access this revolutionary telescope and continue to advance their pioneering work in the fields of exoplanets and cosmology.”

With this partnership, Arizona State University joins the world-wide consortium of scientists and academic institutions who are taking the GMT from concept to reality.