Traveling to Mars Will Wreak Havoc on Our Bodies – Can We Prevent It? 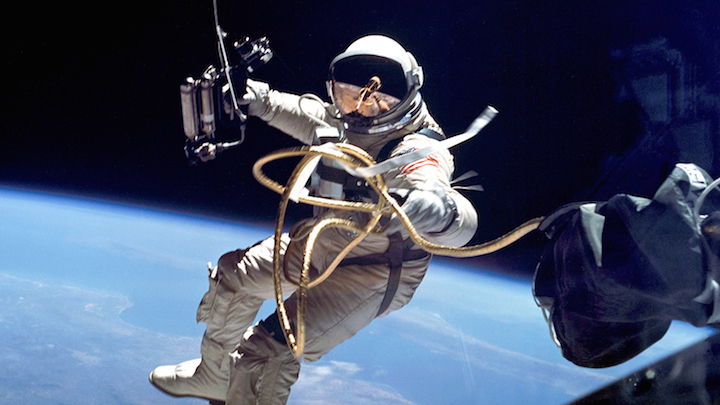 As humans prepare to venture deeper into outer space, including potential trips to Mars, researchers are hard at work trying to understand and mitigate the effects of low gravity and radiation on space travelers’ bodies.

Spaceflight seems to have a particularly notable effect on the musculoskeletal, cardiovascular and immune systems. Many of the changes researchers are seeing as a result of spaceflight are similar to those seen in aging, though they happen much faster in space.

As private aerospace companies and NASA are competing to be the first to land on Mars, UCSF researchers, and many others nationwide, are studying the effects of space travel – and trying to find ways to offset those impacts. 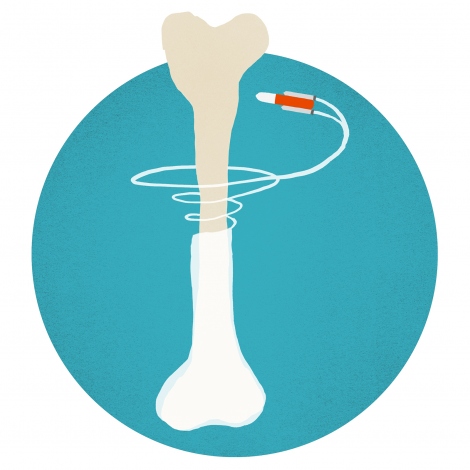 Since the first Apollo space flights in the 1960s and ’70s, the effects of space on muscles and bones has been apparent. After just eight days in orbit, the Apollo astronauts were so weak that they had to be pulled from their landing capsules.

In the following decades, astronauts, such as those on the International Space Station (ISS), began to exercise to keep their bones and muscles conditioned during their six-month stays. Still, many astronauts suffer back pain for years after returning to Earth.

To figure out why the back pain occurs after the exposure to low gravity, Jeffrey Lotz, PhD, the David Bradford Endowed Chair of Orthopedic Surgery at UCSF, recently studied the spines of astronauts after their time in space.

What he found surprised him.

He’d imagined that the back pain arose from disks swollen with water that would ordinarily get squeezed out by keeping an upright posture in gravity. Instead, he discovered the source of the back pain was deconditioning of the multifidus muscles, small muscles that connect and support the vertebrae.

Lotz is working with NASA to devise a program of multifidus exercises that astronauts can do within the constraints of a spaceship in zero gravity.

Exercise is key not only for muscle strength, but for bone health as well, and Lang has been studying the effect of space travel on bones for decades. “Bones aren’t just a hard framework,” he said. “They grow and repair themselves in response to supporting loads against gravity.”

A lack of gravity interrupts the natural cycle of bone function, which goes something like this: Bone cells called osteocytes detect regions of decreased strain or damage to bone tissue, triggering other cells, called osteoclasts, to resorb bone that no longer is needed to meet the strain or has been damaged by repetitive strain. The work of osteoclasts triggers yet another cell, the osteoblast, to move in and rebuild the bone where it is needed.

In the absence of gravity the rebuilding doesn’t seem to happen as a result of the reduced strain on bone. This may put astronauts in danger of bone loss and fractures during their missions. Daniel Bikle, MD, PhD, professor of medicine and dermatology, using mouse studies, determined that microgravity affects communication between bone cells necessary for the bone growth and repair process.

“It’s a bidirectional signaling pathway,” says Bikle. “The bone cells regulate each other’s function.” Lack of gravity produces an interruption in that signaling, and the osteoclasts continue to resorb bone, but the osteoblasts don’t replenish it. Bikle believes this same pathway might be involved in osteoporosis. If so, unraveling the details should provide insight that benefits a population far larger than space travelers.

Lang assessed bone density of astronauts returning from the ISS and found that after six months, they had lost between 6 percent and 9 percent of the total bone density from their hips – losing about as much in a month as a postmenopausal woman loses in a year. In a study focused on bone loss in the hip, Lang and colleagues found that one year after flight, the total bone mass was almost fully recovered but recovered bone was redistributed, resulting in a bone architecture resembling that of an older person.

Radiation exposure, in addition to microgravity, during spaceflight causes bone loss for astronauts, though one study points to a surprising prescription for this.

His next steps are to discern what compounds in the prunes are responsible for the effect. “This approach shows a lot of promise, but it’s not as simple as sending people into space with a truckload of prunes,” he said. “We need to isolate the compound and put it in a pill.”

Heart of the Matter: The Cardiovascular System 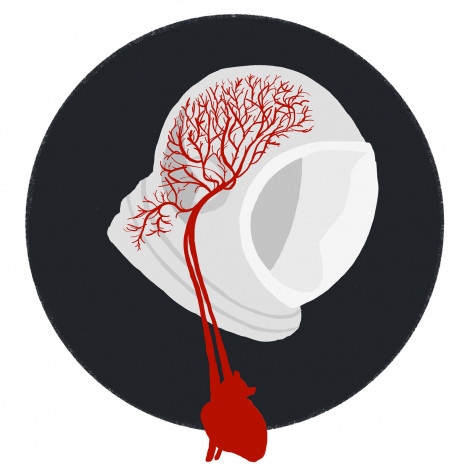 The radiation and low gravity of space also has an impact on the body’s vascular system, causing circulatory problems for astronauts when they return to Earth and an increased risk of heart attack later in life.

Marlene Grenon, MD, associate professor of vascular surgery, has had a longtime interest in the effects of space flight on the vascular system. “Astronauts are in good shape, and exercise protocols are part of their lives,” said Grenon. “So we want to know what’s going on here. Is it radiation? Gravity? Other physiological factors?”

Grenon, who has a diploma in Space Sciences from the International Space University and has developed UCSF’s first course on the effect of spaceflight on the body, has studied the effects of simulated microgravity on the function of vascular endothelial cells which line the inside of blood vessels.

Grenon cultured these cells and placed them in an environment that simulated very low gravity. She found that the lack of gravity causes a decrease in the expression of certain genes in the cells that affect adhesion of plaque to the vessel wall. While the implications of these changes aren’t yet clear, it’s evident that a lack of gravity affects cell function.

In addition, previous work by Grenon showed that microgravity creates changes in the cells that conduct electricity in the heart, which may put astronauts at risk of cardiac arrhythmias.

Grenon’s colleagues Sonja Schrepfer, MD, PhD, and Tobias Deuse, MD, also professors of surgery, are helping put pieces of that puzzle together by determining what changes to the function of vascular cells are evident after space flight.

Schrepfer in 2016 studied the vascular systems of mice that had spent time on the ISS, as well as vascular cells cultured in a microgravity environment on Earth. Her team is still analyzing their data, but so far it appears that the walls of the carotid arteries became thinner in mice in space, possibly because the lower gravity demanded less blood pressure for circulation.

The team also found that the cultured cells showed changes in gene expression and control that resemble changes seen in patients with cardiovascular disease on Earth.

While these changes might not be detrimental in the microgravity of the Space Station, on Earth they result in poor blood circulation.

“When astronauts return to Earth’s gravity, muscle weakness is only part of the reason they can’t stand up,” Schrepfer said. “They also don’t get enough blood to their brain, because their vessel function is impaired.”

There is hope: Schrepfer and her team have identified a small molecule that prevents vascular walls from thinning in mice. She and her team are planning to do safety trials of that molecule on humans in the near future. 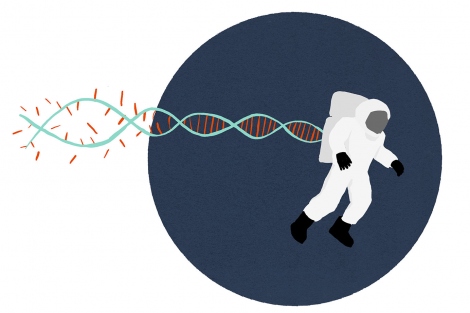 Schrepfer has also received an award to study effects of microgravity on the immune system as a model of aging, both in space and after returning to Earth. She has a kindred spirit in Millie Hughes-Fulford, PhD, adjunct professor of medicine and the first female scientist to work in space. Hughes-Fulford tended experiments aboard the Columbia space shuttle in 1991, and has been investigating the changes in gene expression in T-cells in space since about 2003.

“Over half of the Apollo astronauts had some sort of immune problem,” she said. “So, we knew back then that the immune system wasn’t working well in space.”

Her current work involves not only looking at gene expression but also at the role of microRNA (miRNA) – tiny molecules that can switch genes on or off. Her research revealed five of these miRNAs, each of which controlled genes that activate T-cells, weren’t working properly.

“Before this, we could say that the genes weren’t being turned on, but we didn’t know why,” said Hughes-Fulford. “Now we know the regulators of the genes.”

These changes are the same ones seen in aging, leaving the elderly with less robust immune systems. In space, though, the changes begin to occur after 30 minutes, while in a human they may take 30 years. The research by Schrepfer and Hughes-Fulford could help people who travel in space, but also is an opportunity to study changes that can be challenging to follow throughout decades on Earth.

On the flip side, some research is confirming that other physiological functions may endure space flight.

Fathi Karouia, PhD, a professional researcher in the UCSF School of Pharmacy and scientist at NASA Ames Research Center, was involved in a study showing that the process of DNA repair – vital for an organism’s long-term health – seems to be relatively unaffected by the spaceflight environment.

Karouia, who over the past three years has been part of many experiments looking at cell function in spaceflight, collaborated with Honglu Wu, PhD, of the NASA Johnson Space Center, to study fibroblast cells cultured onboard the ISS. Their investigation looked at how spaceflight, and microgravity in particular, affects the cells’ response to DNA damage.

Assessing the fibroblast cells when they returned, Karouia and his colleagues saw that the space-exposed cells repaired their DNA as effectively as similar cells that remained on Earth.

“The story isn’t clear, though,” Karouia said. “DNA repair also depends on the cell type and growth conditions. This kind of work could help us understand DNA repair processes in all cells, how some cancer cells manage to repair themselves despite damaging radiation treatment.” Ultimately, Karouia said, studies like these will help address risks of radiation during extended space flight, including the mission to Mars.

While the research into space travel’s effect on the human body continues, the researchers agree that before we’re able to send humans to Mars, we need to know more about what’s required for their living environment to keep them alive and healthy.

“The best way to kill a program is to kill the people involved in it,” said Hughes-Fulford. “If we’re going to send spaceships to Mars, we need to understand how to sustain the people living inside them.”

Raumfahrt - Traveling to Mars Will Wreak Havoc on Our Bodies – Can We Prevent It?
1277 Views
Created with page4