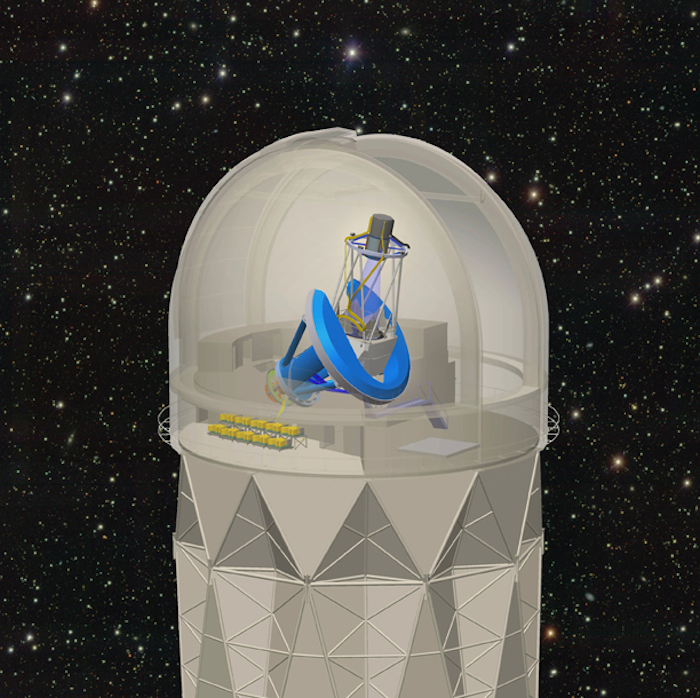 he Dark Energy Spectroscopic Instrument (DESI) will be mounted on the 4­Meter Mayall telescope at Kitt Peak National Observatory. It will collect spectra from 30 million galaxies and quasars to make the biggest 3D map of the universe ever. Images credit: R. Lafever and J. Moustakas for the DESI Collaboration, background image by Dark Energy Camera Legacy Survey

ANN ARBOR—A giant instrument that will create a high-definition, 3-D map of a swath of the universe going back 10 billion light-years has just reached a critical milestone with its funding agency, the Department of Energy.
University of Michigan researchers will build critical components of DESI, the Dark Energy Spectroscopic Instrument. Its mission is to shed light on the role of dark energy in the history of the universe's expansion. Dark energy is believed to have competed with gravity over time to shape the structure of the universe.
"Seventy-five percent of our universe is made of this stuff and ultimately we don't have any understanding of its nature," said Gregory Tarlé, U-M physics professor and member of the DESI executive committee. "DESI will help us understand the fabric of empty space."
The U.S. Department of Energy today announced its approval of "Critical Decision 2, authorizing the project's scientific scope, schedule and funding profile.
DESI will measure the redshifts of more than 30 million galaxies and quasars with unprecedented precision. Redshift, the shift of a distant astronomical object's spectrum to longer (redder) wavelengths, is a direct measure of how much space stretched while the light was on its way from the object to the observer. The bigger the redshift, the older the object.
To capture light whose journey started up to 10 billion years ago—corresponding to a redshift of 3.5, when the universe was less than a third its present age—DESI will be mounted on the 4-meter Mayall telescope at Kitt Peak National Observatory near Tucson, Ariz.
"DESI aims to use the fossil imprint of sound waves from the first 400,000 years of the universe (still detectable as a pattern of temperature variations in the cosmic microwave background radiation) to study the mysterious composition of today's universe," said DESI collaboration spokesman Daniel Eisenstein of Harvard University.
Those temperature differences map early variations in density (sound waves) that subsequently evolved into the clustering of galaxies, intergalactic gas and dark matter at recurrent intervals throughout space. Called "baryon acoustic oscillations," these regularly spaced clusterings are consistent over time—like a ruler to gauge the universe, with the cosmic microwave background at one end—allowing direct measures of dark energy's effect on expansion, the DOE said in a statement.
Two hundred physicists and astronomers make up the international DESI Collaboration, which is based at DOE's Lawrence Berkeley National Laboratory. Seven U-M faculty members will be involved with the project in areas such as software development, survey planning, data distribution and simulation work. They will also be on the science team when DESI sees first light in 2019.
. 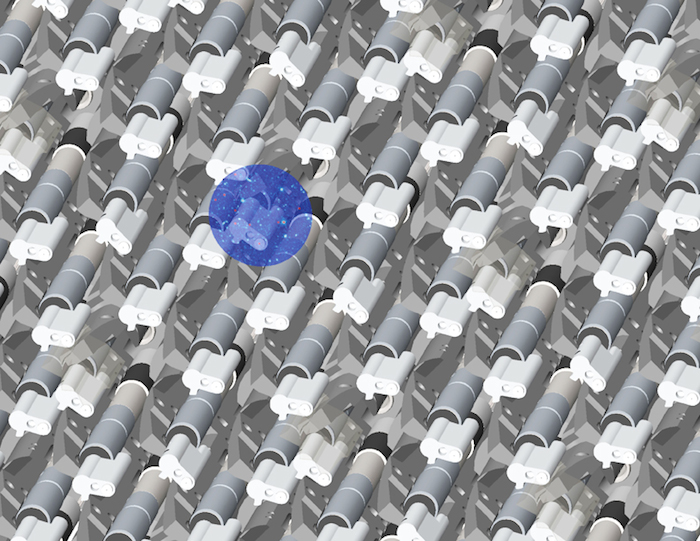 University of Michigan researchers will make more than 5,000 close­packed robotic positioners for DESI. The positioners will be placed at the ends of optical fibers to collect the light from a single galaxy or quasar. The blue circle represents a patch of sky with numerous astronomical targets reachable by a single of these robots. In seconds it can rotate, extend, or retract to place its fiber in position with millionths of a meter precision. Image credit: R. Lafever, DESI Collaboration
.
The camera will contain 5,000 optical fibers, each of which can be pointed at an individual galaxy. Over the next few years, U-M researchers will build its unique, robotic positioner system, which Tarlé calls "the heart of DESI."
Tarlé will lead the effort at U-M in addition to managing the robotic fiber positioner system. Tarlé chairs the DESI Institutional Board and serves on the DESI Executive Committee. Other U-M physics researchers involved include: professor David Gerdes, who will participate in the targeting surveys; associate
professor Dragan Huterer, who intends to develop methodologies, algorithms and software codes to study the growth of structure and the expansion rate of the universe; and research scientist Michael Schubnell, who will be responsible for testing and quality control for the DESI fiber positioner production at Michigan.
Astronomy faculty members involved include: assistant professor Chris Miller, who co-chairs the Data Distribution Committee and will use galaxy cluster to measure the evolution of dark energy; associate professor Eric Bell, who is focusing on identifying the galaxies DESI will observe; and research associate professor Monica Valluri, who is using simulations to understand how DESI can be used to unravel the assembly of the Milky Way.
Key to DESI's present and future success is its robust scientific collaboration, supported by many organizations, among them 31 universities and 18 government and private institutions, both U.S. and foreign, including five DOE national labs.
DOE and NSF will shortly begin joint support for Mayall telescope operations, preparatory work, and installation of the DESI instrument. Beginning in fiscal year 2019, DOE will support the full operations of the telescope throughout the five-year DESI survey.
The DESI Project is funded by the U.S. Department of Energy, Office of Science. U-M funding for the project is provided by the departments of Physics and Astronomy in the College of Literature, Science, and Arts; and from the U-M Office of Research.
Additional support has been provided by the U.S. National Science Foundation; Gordon and Betty Moore Foundation; Heising-Simons Foundation; Science and Technologies Facilities Council of the United Kingdom; Consejo Nacional de Ciencia y Tecnología, Mexico; Chinese Academy of Sciences; and DESI membership: Aix-Marseille University; Argonne National Laboratory; Barcelona-Madrid Regional Participation Group; Brookhaven National Laboratory; Boston University; Carnegie Mellon University; CEA-IRFU, Saclay; China Participation Group; Cornell University; Durham University; École Polytechnique Fédérale de Lausanne; Eidgenössische Technische Hochschule, Zürich; Fermi National Accelerator Laboratory; Granada-Madrid-Tenerife Regional Participation Group; Harvard University; Korea Astronomy and Space Science Institute; Korea Institute for Advanced Study; Institute of Cosmological Sciences, University of Barcelona; Lawrence Berkeley National Laboratory; Laboratoire de Physique Nucléaire et de Hautes Energies; Mexico Regional Participation Group; National Optical Astronomy Observatory; Siena College; SLAC National Accelerator Laboratory; Southern Methodist University; Swinburne University; Ohio State University; Universidad de los Andes; University of Arizona; University of California, Berkeley; University of California, Irvine; University of California, Santa Cruz; University College London; University of Michigan; University of Pennsylvania; University of Pittsburgh; University of Portsmouth; University of Queensland; University of Toronto; University of Utah; UK Regional Participation Group; Yale University.
Quelle: University of Michigan
Astronomie
« Zum vorherigen Eintrag Zum nächsten Eintrag »
2556 Views
Created with page4