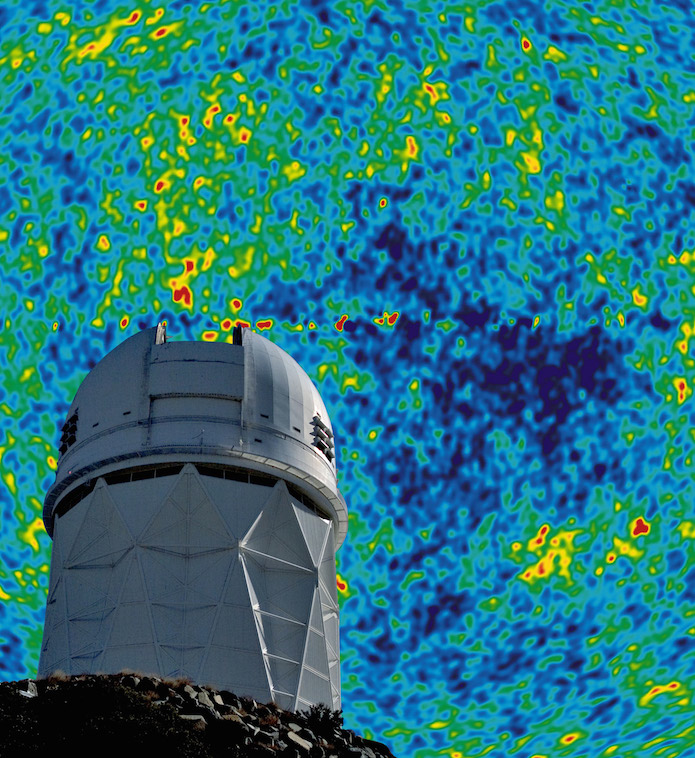 The Dark Energy Spectroscopic Instrument (DESI), destined for the 4-meter Mayall telescope at Kitt Peak National Observatory (KPNO), will chart out the role of dark energy in the expansion history of the universe. The US Department of Energy has announced its approval of Critical Decision 2 (CD-2) for the DESI project, authorizing its scientific scope, schedule, and funding profile. The Mayall telescope is operated by the National Optical Astronomy Observatory (NOAO).
To carry out its mission, DESI will measure the redshifts of more than 30 million galaxies and quasars and create a three-dimensional map of the universe that extends from the nearby universe out to a distance of 10 billion light years. Probing a larger volume of the universe than any map yet made, the map will reveal how dark energy and gravity have competed over time to shape the structure of the universe.
DESI’s unique map-making ability is made possible by the massively parallel nature of its optical spectrometer. Lori Allen, NOAO Associate Director for KPNO explains, “DESI will measure 5000 spectra at a time over a huge 8 square degree field-of-view, or approximately 40 times the area of the full moon. DESI on the Mayall telescope will be a world-leading spectroscopic capability.”
Large optical lenses and speedy robotic fiber positioners are critical to DESI’s highly multiplexed spectroscopy. To attach the spectrometer to the telescope, the top end of the Mayall will be replaced with DESI’s optical corrector and focal-plane system. The six glass lenses of the corrector, each a meter across, will focus the light from the 4-meter diameter primary mirror onto the 0.8-meter diameter focal plane, which will consist of 5,000 tiny robots, each holding an optical fiber. The closely packed robots will position the fibers so that each captures the spectrum of a single galaxy or quasar. The robots are designed to position the fibers precisely and quickly, in under a minute, in order to survey the 14,000 square degrees of sky that DESI will study over five years. The fibers will feed ten 3-arm spectrographs.
“DESI will be a heavyweight, both scientifically and literally,” says David Sprayberry, NOAO Project Manager for DESI. “The instrument will weigh 5 tons.”
DESI’s scientific reach stretches beyond cosmology. It will be a powerful engine of discovery in many areas of astrophysics, and unanticipated discoveries are expected. “The DESI survey will venture into hitherto uncharted territory”, says Arjun Dey, NOAO’s Project Scientist for DESI. “In astronomy, the most interesting discoveries are often the ones we least expect!”
The DESI project team, which is responsible for the design, fabrication, installation and commissioning of the instrument, is comprised of technical staff from Lawrence Berkeley National Laboratory, Fermilab, NOAO, and the SLAC National Accelerator Laboratory, as well as technical teams from six US universities and five foreign institutions in the United Kingdom, France, Spain, and Switzerland.
DESI is the latest chapter in NOAO’s history of studying dark energy. In the late 1980s, NOAO and its facilities were involved in the unexpected discovery that the expansion of the universe is accelerating (Reiss et al. 1998, Perlmutter et al. 1999). The acceleration has been attributed to dark energy, the nature of which remains a mystery. Dark energy is currently estimated to make up approximately 70% of the universe. NOAO and its facilities are currently involved in two other projects in partnership with DOE that are designed to study the nature of dark energy, the Dark Energy Survey (DES), currently ongoing at Cerro Tololo Inter-American Observatory, and the Large Synoptic Survey Telescope (LSST), also sited in Chile, which is scheduled to begin science operations at the beginning of the next decade.
“NOAO is partnering with world-leading teams in wide-field survey-based astronomy and astrophysics,” says Robert Blum, Deputy Director of NOAO. “At a time when every federal research dollar must count, NOAO is embarking on programs that efficiently deliver huge data sets to the US astronomical community for exploration and experimentation alike.”
Quelle: National Optical Astronomy Observatory
Astronomie
« Zum vorherigen Eintrag Zum nächsten Eintrag »
2653 Views
Created with page4