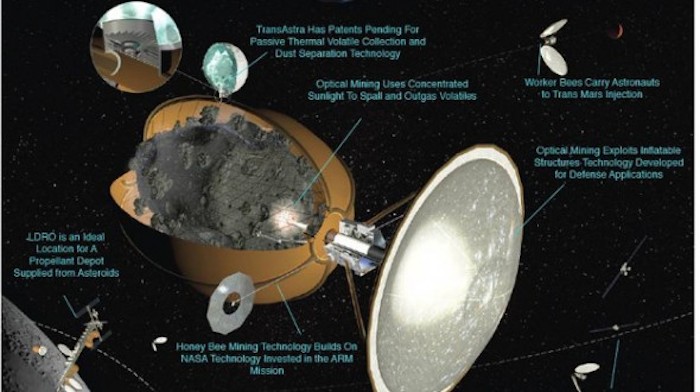 Off-world living will require some innovations in survival. When we get to Mars, we can’t simply package all the water and boxed lunches we need on the vessel. Alternative sourcing is necessary for survival. Enter: optical mining, a patent-pending commercial technology that provides a new way to harvest asteroid resources.
The concept is known as the Asteroid Provided In-Situ Supplies plan (Apis), which was developed under NASA’s Innovative Advanced Concepts (NIAC) fellowship and grant. The idea is a business model in harvesting near-Earth resources that have yet to be tapped into, explains Apis principal investigator Joel Sercel said to Space.com, “one that moves reusability into space and more commercial methods and practices into deep space.”
The device would harvest near-Earth asteroids of their water and other materials, containing them in an inflatable bag. Holes would be drilled into the asteroid through direct solar-thermal energy. These holes in combination with the heat would “drive out the volatiles in tiny, explosive like pops that eject material in a controllable way,” Sercel explained in an interview with Space.com. “We believe that highly concentrated sunlight can drill holes, excavate, disrupt and shape an asteroid while the asteroid is enclosed in a containment bag.” Then the gas and water would be pumped into another bag, cooled, and stored as solid ice until it was flown to its destination.
Sercel writes an estimated 120 tons of water and other resources could be stored and collected over the course of several months using these techniques.
The issue with asteroid mining is finding ones worth the journey. Some scientist estimate that there are only about 10 asteroids near Earth suitable for mining. However, NASA’s Hedgehog robot could be a good tool to do the preliminary work, collecting samples for science, before a commercial mission to a nearby asteroid was taken on.
Quelle: GEEK
Raumfahrt
« Zum vorherigen Eintrag Zum nächsten Eintrag »
2558 Views
Created with page4