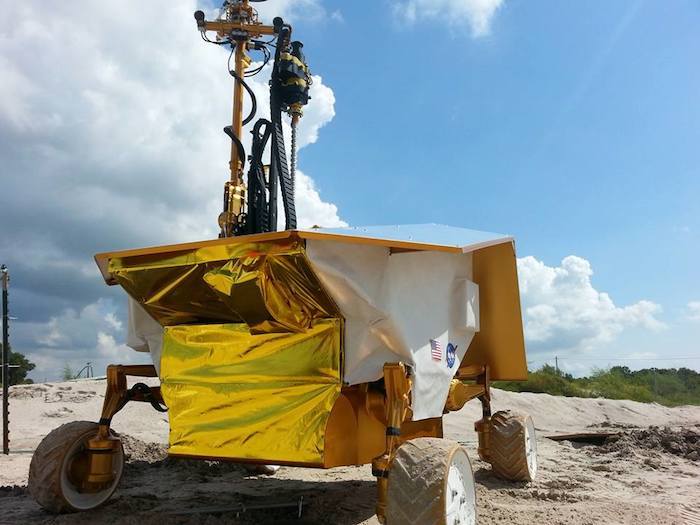 The prototype of a rover designed to search for water ice at the poles of the moon passed a series of tests on Earth in August as project officials seek to line up funding and potential partnerships for the mission.
A NASA team put the prototype version of the Resource Prospector rover, dubbed RP15, through its paces on a test site dubbed the “rock yard” at the Johnson Space Center, testing some of the technologies needed to operate on the lunar surface.
“We wanted to take what we had learned so far and actually attempt to do an entire terrestrial mission, with as high a fidelity we could afford with the budget we’re given,” Dan Andrews, Resource Prospector project manager at NASA’s Ames Research Center, said in an Aug. 31 presentation at the American Institute of Aeronautics and Astronautics’ Space 2015 conference in Pasadena, California.
Andrews said the project came up with the idea of RP15 in the fall of 2014, just before the current fiscal year started, and set a goal of building and testing the rover by the end of this fiscal year. A group at JSC that previously worked on Robonaut, a humanoid robot flown on the International Space Station, built the rover hardware, with software developed at Ames based on that used on the Lunar Atmosphere and Dust Environment Explorer mission.
The tests in the JSC rock yard, he said, successfully demonstrated some of the key technologies of the rover, including its ability to drill into the ground and capture samples. They also tested distributed operations, with teams at Ames controlling the rover at JSC.
Current plans for Resource Prospector call for launching the mission on a medium-class rocket, like SpaceX’s Falcon 9, in 2020. The spacecraft would land on the lunar surface, near one of the poles, using a “crushable pad” landing system that eliminates the need for landing legs and makes it easier for the rover to roll off the lander and onto the lunar surface.
The rover will carry a neutron spectrometer to probe for water ice deposits into the lunar surface. The solar-powered rover would also make brief excursions into permanently shadowed regions of craters most likely to have near-surface deposits of ice, drilling for samples before retreating back into sunlit regions to analyze them.
Andrews said Resource Prospector is designed to carry out its complete mission within a two-week lunar day. That eliminates the complexity and accompanying cost of designing the rover to survive the long lunar night.
Resource Prospector has a planned cost of no more than $250 million, excluding launch. Andrews said the mission would most likely be carried out in cooperation with an international or commercial partner that would provide the lander. “We’ve been told by the [White House] Office of Science and Technology Policy that commercial partnerships, or international partnerships, trump everything,” he said.
A leading option is to work with the Japan Aerospace Exploration Agency, which is planning a lunar lander mission. NASA and JAXA have discussed potential cooperation on Resource Prospector for a year and a half, including putting together a report on how the NASA rover would be included on the JAXA lander.
“They are building, as you might imagine, a very impressive lander, more than we need to execute this mission,” Andrews said. A problem with that option, though, is that the lander may not be ready for a 2020 mission, since JAXA is not planning to fly a smaller prototype lander until 2019. A second option, he said, is to partner with Taiwan, which is also studying a lunar lander mission.
Andrews said he has also visited with the three companies — Astrobotic Technology, Masten Space Systems and Moon Express — that are part of NASA’s Lunar Cargo Transportation and Landing by Soft Touchdown initiative to support development of commercial lunar landers. Astrobotic and Moon Express are among the teams in the Google Lunar XPrize competition to develop lunar landers by a deadline that has been extended several times, most recently to the end of 2017. A decision on some kind of partnership is needed by June 2016 to support a launch in the fall of 2020, he said.
Work on Resource Prospector, including the RP15 rover, has been funded by NASA’s Advanced Exploration Systems program office. Future support, though, remains uncertain. One issue, Andrews suggested, was the politics of lunar exploration in the wake of the decision to cancel the Constellation program in 2010. “It got swept up in general with the politics of ‘no’ to the moon,” he said.
Andrews said Resource Prospector is now ready to go into Phase B, the planning phase of project development, provided the funding is there. “The politics may not be lined up yet,” he said. “Everything’s right but the local U.S. politics.”
Quelle: SN
Raumfahrt
« Zum vorherigen Eintrag Zum nächsten Eintrag »
2372 Views
Created with page4