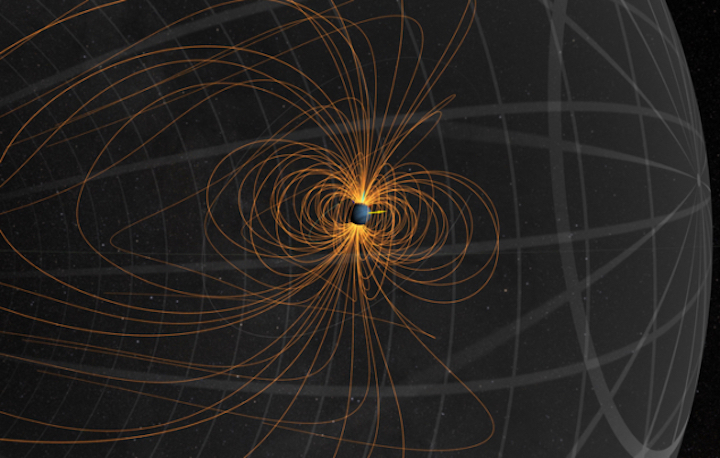 The magnetic field of Neptune, like that of the Earth, is not static but varies over time. Pictured is a snapshot from August 2004. Courtesy: NASA's Scientific Visualization Studio

For a relatively simple chemical compound, water – especially its frozen varieties – is surprisingly poorly understood. An international team of researchers has now chipped away at the mystery by measuring the structure and properties of a form of ice known as ice XVIII and another superionic ice phase, ice XX. The team’s work could shed light on the formation of the unusual magnetic fields of the planets Uranus and Neptune, which are thought to contain these two phases of ice deep in their interiors.

Although most of the ice found on Earth has a hexagonal structure (think of snowflakes), ice can take on at least 20 different crystalline and amorphous forms. This curious behaviour comes in part from the weak intermolecular bonds between its two hydrogen atoms, which are separated by a single atom of oxygen.

Hot ice and other icy phases

One of the most-studied high-pressure forms of ice is ice VII, also known as “hot ice”. This exotic body-centred cubic (bcc) crystal phase forms at ambient temperatures at pressures above 2.3 GPa (about 23,000 times atmospheric pressure at sea level) and it has been theorized to exist in cold subduction zones within the Earth’s crust as well as on Saturn’s icy moon Titan.

Another novel ice phase, superionic ice or ice XVIII, is predicted to exist at higher temperatures and pressures, around 1000 K and 40 GPa. This form of frozen water contains liquid-like hydrogen ions – that is, protons – that quickly diffuse through a solid lattice of oxygen atoms. Superionic ice could make up a large fraction of the interiors of Uranus and Neptune, with the fast-diffusing protons helping to generate the strong and complex magnetic fields characteristic of these “ice giant” planets.

Mimicking the conditions inside the ice giants

“The superionic phase of ice was predicted two decades ago, but when we have started our experiments 10 years ago there were no direct experimental evidence for the existence of this superionic phase,” co-team leader Vitali Prakapenka, a beamline scientist at the University of Chicago, US, tells Physics World. “And theoretical estimations of the pressure and temperature stability range for this phase were extremely controversial.”

In the past, Prakapenka explains, various research groups had collected experimental data on these phases using X-ray and optical techniques. These data hinted that water behaves in unusual ways under high pressure-temperature conditions, but the scattered nature of the results meant that the overall picture was unclear. “We have now solved this puzzle,” he says.

Together with colleagues Alexander Goncharov from the Carnegie Institution of Washingtonand Sergey Lobanov of the German Research Center for Geosciences GFZ Potsdam, Prakapenka measured the structure and properties of ice XVIII and another superionic ice phase, ice XX. To do this, the researchers began by placing a room-temperature sample of water in a diamond anvil cell and increasing the pressure to 150 GPa, producing ice VII or ice X. They then increased the water’s temperature to 6500 K by heating it with high-power laser light. These are the conditions that prevail several thousand kilometres inside Uranus and Neptune, which likely contain more than 60% water.

Next, the researchers used X-ray diffraction techniques to observe how the crystalline ice structure changed and became superionic. They carried out these experiments using the extremely bright synchrotron rays at the Advanced Photon Source (APS) of the Argonne National Laboratory, backed up by optical spectroscopy measurements at Carnegie’s Earth and Planets Laboratory that aimed to determine the ice’s optical conductivity. They observed two phases – ice XVII and ice XX – and determined the pressure and temperature at which these phases suddenly undergo a change in their optical properties.

The researchers say their results could help explain Uranus’ and Neptune’s magnetic fields, which are unusual in that they do not run quasi-parallel and symmetrically to the axis of the planets’ rotation (as Earth’s magnetic field does). Instead, the magnetic fields of the ice giants are skewed and off-centre. Models of how they formed therefore hypothesize that they are generated not by the motion of molten iron in the core (as on Earth) but by conductive water-rich liquid in the planets’ outer third.

“We can draw the pressure and temperature in the interiors of Uranus and Neptune,” Lobanov explains. “Here, the pressure can roughly be taken as a measure of the depth inside. Based on the refined phase boundaries we have measured, we see that about the upper third of both planets is liquid, but deeper interiors contain solid superionic ices. This confirms the predictions about the origin of the observed magnetic fields.”

“Our study is only a first step in characterizing the structure of superionic phases, their density, optical properties, and pressure-temperature boundaries,” Prakapenka adds. Future studies, he says, will focus on pinning down the nature of this unique state of matter by combining theoretical simulations with experimental measurements of the electrical conductivity of superionic phases, their viscosity, chemical reactivity and composition effects.