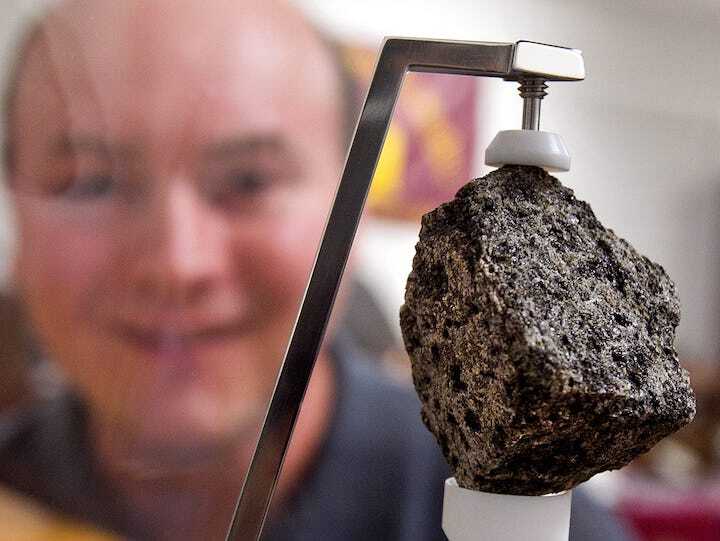 So can you legally own a piece of the moon?

There are four sources of lunar material on Earth:

A tiny sample of the Soviet lunar soil has sold twice at auction, most recently in 2018 for $855,000. Sotheby's auction house said the buyer was a "private American collector."

The sample, which weighs just about as much as raindrop, was initially presented to the widow of Sergei Korolev, the "Chief Designer" of the Soviet Union's space program. It was first auctioned by Sotheby's in 1993 for $442,500. The buyer then was a different American collector.

It remains the only lunar sample — other than from meteorites — legally in private hands.

What should you do if you think you have a moon rock?

The folks at collectSPACE.com have helped people identify what they thought were moon rocks over the years.

Generally, what people think are moon rocks aren't real lunar samples, says Robert Pearlman who runs the site. But in the rare case where somebody has an actual Apollo moon rock, Pearlman can help put them in touch with the proper authorities. You can send your queries to moonrocks@collectspace.com.

Pearlman also suggested contacting the geology department of a local university for testing.

If you are absolutely convinced that you have an Apollo moon rock, you should contact NASA's Office of Inspector General to arrange to surrender the sample. The OIG's hotline is 1-800-424-9183.

Raumfahrt - Moon rocks: What to do if you think you have a lunar souvenir collected by Apollo astronauts
« Zum vorherigen Eintrag Zum nächsten Eintrag »
43 Views
Created with page4