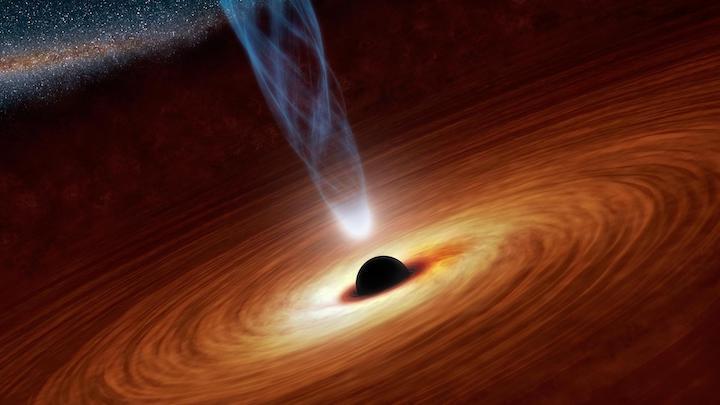 A black hole is an extremely dense object in space from which no light can escape. While black holes are mysterious and exotic, they are also a key consequence of how gravity works: When a lot of mass gets compressed into a small enough space, the resulting object rips the very fabric of space and time, becoming what is called a singularity. A black hole's gravity is so powerful that it will be able to pull in nearby material and "eat" it.

Here are 10 things you might want to know about black holes:

1. How can we learn about black holes if they trap light, and can't actually be seen?

No light of any kind, including X-rays, can escape from inside the event horizon of a black hole, the region beyond which there is no return. NASA's telescopes that study black holes are looking at the surrounding environments of the black holes, where there is material very close to the event horizon. Matter is heated to millions of degrees as it is pulled toward the black hole, so it glows in X-rays. The immense gravity of black holes also distorts space itself, so it is possible to see the influence of an invisible gravitational pull on stars and other objects.

2. How long does it take to make a black hole?

A stellar-mass black hole, with a mass of tens of times the mass of the Sun, can likely form in seconds, after the collapse of a massive star. These relatively small black holes can also be made through the merger of two dense stellar remnants called neutron stars. A neutron star can also merge with a black hole to make a bigger black hole, or two black holes can collide. Mergers like these also make black holes quickly, and produce ripples in space-time called gravitational waves.

More mysterious are the giant black holes found at the centers of galaxies — the "supermassive" black holes, which can weigh millions or billions of times the mass of the Sun. It can take less than a billion years for one to reach a very large size, but it is unknown how long it takes them to form, generally.

3. How do scientists calculate the mass of a supermassive black hole?

The research involves looking at the motions of stars in the centers of galaxies. These motions imply a dark, massive body whose mass can be computed from the speeds of the stars. The matter that falls into a black hole adds to the mass of the black hole. Its gravity doesn't disappear from the universe.

4. Is it possible for a black hole to "eat" an entire galaxy?

No. There is no way a black hole would eat an entire galaxy. The gravitational reach of supermassive black holes contained in the middle of galaxies is large, but not nearly large enough for eating the whole galaxy.

5. What would happen if you fell into a black hole?

It certainly wouldn't be good! But what we know about the interior of black holes comes from Albert Einstein's General Theory of Relativity.

For black holes, distant observers will only see regions outside the event horizon, but individual observers falling into the black hole would experience quite another "reality." If you got into the event horizon, your perception of space and time would entirely change. At the same time, the immense gravity of the black hole would compress you horizontally and stretch you vertically like a noodle, which is why scientists call this phenomenon (no joke) "spaghettification."

Fortunately, this has never happened to anyone — black holes are too far away to pull in any matter from our solar system. But scientists have observed black holes ripping stars apart, a process that releases a tremendous amount of energy.

6. What if the Sun turned into a black hole?

The Sun will never turn into a black hole because it is not massive enough to explode. Instead, the Sun will become a dense stellar remnant called a white dwarf.

But if, hypothetically, the Sun suddenly became a black hole with the same mass as it has today, this would not affect the orbits of the planets, because its gravitational influence on the solar system would be the same. So, Earth would continue to revolve around the Sun without getting pulled in — although the lack of sunlight would be disastrous for life on Earth.

7. Have black holes had any influence on our planet?

Stellar-mass black holes are left behind when a massive star explodes. These explosions distribute elements such as carbon, nitrogen and oxygen that are necessary for life into space. Mergers between two neutron stars, two black holes, or a neutron star and black hole, similarly spread heavy elements around that may someday become part of new planets. The shock waves from stellar explosions may also trigger the formation of new stars and new solar systems. So, in some sense, we owe our existence on Earth to long-ago explosions and collision events that formed black holes.

8. What is the most distant black hole ever seen?

The most distant black hole ever detected is located in a galaxy about 13.1 billion light-years from Earth. (The age of the universe is currently estimated to be about 13.8 billion years, so this means this black hole existed about 690 million years after the Big Bang.)

This supermassive black hole is what astronomers call a “quasar,” where large quantities of gas are pouring into the black hole so rapidly that the energy output is a thousand times greater than that of the galaxy itself. Its extreme brightness is how astronomers can detect it at such great distances.

9. If nothing can escape from a black hole, then won't the whole universe eventually be swallowed up?

The universe is a big place. In particular, the size of a region where a particular black hole has significant gravitational influence is quite limited compared to the size of a galaxy. This applies even to supermassive black holes like the one found in the middle of the Milky Way. This black hole has probably already "eaten" most or all of the stars that formed nearby, and stars further out are mostly safe from being pulled in. Since this black hole already weighs a few million times the mass of the Sun, there will only be small increases in its mass if it swallows a few more Sun-like stars. There is no danger of the Earth (located 26,000 light years away from the Milky Way's black hole) being pulled in.

Future galaxy collisions will cause black holes to grow in size, for example by merging of two black holes. But collisions won't happen indefinitely because the universe is big and because it's expanding, and so it's very unlikely that any sort of black hole runaway effect will occur.

10. Can black holes get smaller?

Yes. The late physicist Stephen Hawking proposed that while black holes get bigger by eating material, they also slowly shrink because they are losing tiny amounts of energy called "Hawking radiation."

Hawking radiation occurs because empty space, or the vacuum, is not really empty. It is actually a sea of particles continually popping into and out of existence. Hawking showed that if a pair of such particles is created near a black hole, there is a chance that one of them will be pulled into the black hole before it is destroyed. In this event, its partner will escape into space. The energy for this comes from the black hole, so the black hole slowly loses energy, and mass, by this process.

Eventually, in theory, black holes will evaporate through Hawking radiation. But it would take much longer than the entire age of the universe for most black holes we know about to significantly evaporate. Black holes, even the ones around a few times the mass of the Sun, will be around for a really, really long time!