Jupiter’s moon Io is known for its lava fountains and roiling lava lakes, but scientists had never seen such an intense eruption in their data until now. 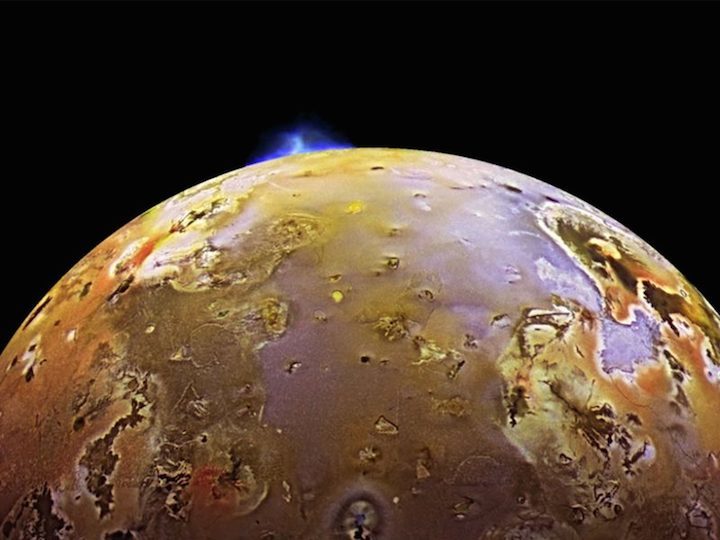 Twenty years ago, “something huge, powerful, and energetic happened at the surface of Io,” said Ashley Davies, a volcanologist at NASA’s Jet Propulsion Laboratory in Pasadena, Calif. Davies and his colleagues think they’ve discovered a type of eruption never before spotted on one of the most volcanically active bodies in the solar system.

The researchers stumbled on the eruptive evidence in data from NASA’s Galileo orbiter mission, which explored the Jupiter system from 1995 to 2003. They think the data reflect a Strombolian eruption, a violent event named for Italy’s energetic Stromboli Volcano.

But wait, you ask, didn’t Galileo plunge into Jupiter’s atmosphere at the end of its mission, way back in 2003? Well, yes. But the orbiter, at that point, had collected so much data about the Jovian system and its Galilean moons (Ganymede, Io, Callisto, and Europa) that scientists still haven’t waded through it all, even 14 years later.

On this 3,600-kilometer-wide moon, eruptions take place “on a scale that simply isn’t seen on Earth today but was once common in Earth’s past,” Davies said. The scale, frequency, and intensity of Io’s eruptions make it a perfect analogue of early Earth, he continued, back when our blue planet was just a barren hellscape of lava.

Davies found evidence for the eruption he reported at Fall Meeting in data from Galileo’s Near Infrared Mapping Spectrometer (NIMS), which took pictures of the moon in the infrared wavelengths. This instrument allowed researchers to measure the thermal emissions, or heat, coming off the volcanically active moon.

While looking through the NIMS temperature data, Davies and his colleagues spotted a brief but intense moment of high temperatures that cooled oddly quickly. This signal showed up as a spike in heat from a region in the southern hemisphere called Marduk Fluctus. First, the researchers saw a heat signal jump to 4–10 times higher than background, or relatively normal, levels. Then just a minute later, the signal dropped about 20%. Another minute later, the signal dropped another 75%. Twenty-three minutes later, the signal had plummeted to the equivalent of the background levels.

This signature resembled nothing Davies had seen before from Io. The lava flows and lava lakes are familiar: Their heat signals peter out slowly because as the surface of a lava flow cools, it creates a protective barrier of solid rock over a mushy, molten inside. Heat from magma underneath conducts through this newly formed crust and radiates from Io’s surface as it cools, which can take quite a long time.

The new heat signature, on the other hand, represents a process never before seen on Io: something intense, powerful, and—most important—fast.

This new heat signature, on the other hand, represents a process never before seen on Io, Davies said: something intense, powerful, and—most important—fast.

There’s only one likely explanation for what the instruments saw, explained Davies, whose volcanic expertise starts here on Earth. Large, violent eruptions like those seen at Stromboli are capable of spewing huge masses of tiny particles into the air, which cool quickly. See for yourself in this video of Stromboli erupting:

As chance would have it, Galileo was likely in the right place at the right time to see the signatures of such an eruption on Io.

Why do scientists care about an eruption on a moon nearly 630 million kilometers away?

The temperature of Io’s lava dictates what kind of material makes up the moon, Davies said. For instance, if the rising magma erupts at temperatures of 1,800 or 1,900 K, it’s probably composed of komatiite, a rock extremely low in silicon. This rock is rarely found on Earth today, although scientists think it was commonly found during the Archaen eon 2.5–3.8 billion years ago, Earth’s early volcanic days. However, if the magma erupts at 1,400 or 1,500 K, that means it’s primarily made of basalt.

The lava’s composition and temperature, in turn, can tell scientists what’s going on in the moon’s interior. Scientists aren’t yet sure how the push and pull from Jupiter’s gravity affect Io’s innards. Some have hypothesized that the grinding from the gravitational pull heats Io’s interior enough to produce a subsurface magma ocean.

“Instead of being a completely fluid layer, Io’s magma ocean would probably be more like a sponge with at least 20% silicate melt within a matrix of slowly deformable rock,” said Christopher Hamilton, a planetary volcanologist at the University of Arizona’s Lunar and Planetary Science Laboratory in a prior press release about the push and pull of tidal forces on Io. Hamilton was not involved in this research.

To help refine such hypotheses, scientists need the composition of melt and how hot it gets, Davies explained. But figuring out the precise heat of Io’s lava is tricky because regardless of its starting temperature, it cools relatively quickly. So even if the lava is made of komatiite, scientists may not be able to catch the signal before it cools to a temperature resembling that of basalt.

The good news about large, Stromboli-type eruptions is that they expose vast areas of lava at incandescent temperatures.

The good news about large, Stromboli-type eruptions is that they expose vast areas of lava at incandescent temperatures. “So what we end up with is an event, if you can capture it, that will show a lot of lava at the temperature it erupted,” Davies said.

Current and future probes can then home in on Marduk Fluctus for more detailed surveys to reveal such precise temperature data, Davies explained. However, until such future instruments launch, scientists still have mountains of Galileo data to get through.