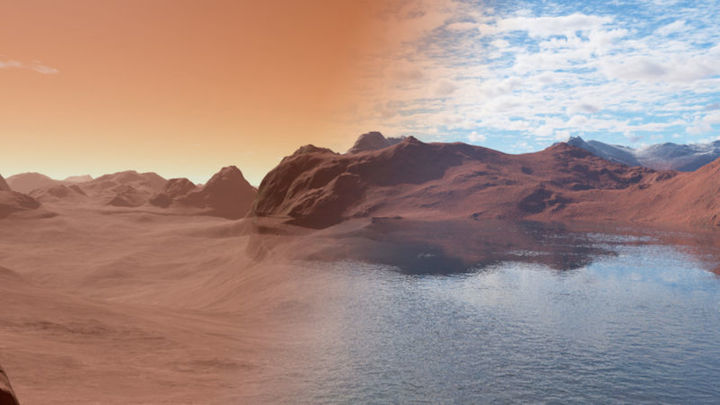 Lots lost to space, but Mars’ rocks might have done something Earth’s didn’t.

Part of our fascination with cold-and-dry Mars is its warm-and-wet past. What was Mars like when it had liquid water? Did any life swim in it? And where did the water go?

The most obvious explanation for that last question is that Mars’ water slowly diffused into outer space. Because Mars is considerably smaller than the Earth, its interior cooled much more quickly. When the Red Planet’s magnetic field petered out around 4 billion years ago, the loss of this atmosphere-protecting shield would have allowed water vapor to escape.

But that’s not necessarily the whole story. Estimates of Mars’ initial store of water are generally larger than estimates of how much would have escaped to space in this way. What didn’t go up may have gone down—beneath the Martian surface.

Mars has water ice in its polar caps, and it may have layers of ice just below the surface in some areas. But it’s Mars’ bedrock that a group of researchers led by the University of Oxford’s Jon Wade got to thinking about.

On Earth, rocks carry some surface water downward, largely because of plate tectonics. But that water eventually comes back up. That’s because rising temperature and pressure at greater depths release water from its mineral bonds, where it can trigger the production of magma that carries it up toward volcanic exit points. In this way, water generally avoids diving too deeply into the confines of Earth’s interior.

Mars probably cooled too quickly to develop much in the way of plate tectonics, but that’s not the only difference that’s important here. Higher oxygen availability during the formation of Mars is responsible for Martian basalt (lava flows) having slightly different iron chemistry from its terrestrial counterpart. Couple that with the fact that temperature increases more slowly with depth, and Mars’ rocks can have a very different interaction with water.

When Earth’s basalts incorporate water into their minerals, the density decreases, and these slightly “buoyant” rocks are unlikely to sink too deep. But the chemistry difference in Martian basalts largely negates the buoyancy effect even as it allows them to absorb more water. And the different geothermal gradient ultimately allows water to match up with minerals at deeper depths.

So the researchers imagine the process playing out like this: Martian lavas form layers of basalt that incorporate surface water over time. The eruption of more layers of lava on top gradually bury older layers and push them down deeper and deeper. When the layers descend far enough, the temperature finally reaches the melting point for some of the minerals in the rock. But after those minerals start to melt and separate from the still-solid rock, some of the water ends up in the still-solid portion—which happens to become more dense in the process. At that point, the water is effectively stuck in the Martian mantle.

Modeling this process shows that at least twice as much of Mars’ mantle could now contain water, compared to the Earth. So it could be that the water that didn’t escape to space was instead captured by the red planet’s mantle.

This illustrates how fairly minor differences—a smaller planet that cools faster and starts with a little more oxygen in its elemental mix—can have huge consequences for a planet’s evolution. Earth’s geology kept its water near the surface, while Mars likely pulled it downwards and locked it away. Today, one planet is blue and the other is red.