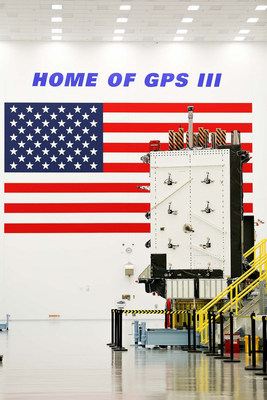 GPS III SV01 now awaits a call up to begin pre-launch preparations. In the meantime, the advanced satellite is stored in an environmentally-controlled clean room, where engineers can perform maintenance and continue to service the satellite.

New GPS Capabilities:
GPS III SV01 is the first space vehicle of an entirely new satellite design. GPS III is a next generation technology and capability leap over any of the 31 GPS Block II satellites that currently populate today's operational GPS constellation.

Designed for the Future:
One of the keys to Lockheed Martin's GPS III is it was designed for today's mission with an eye on tomorrow's needs.

"As we designed GPS III, we knew that mission needs would change in the future and that new technology will become available. We wanted the satellite to be flexible to adapt to those changes," said Mark Stewart, vice president of Lockheed Martin's Navigation Systems mission area. "To do that, we intentionally developed GPS III with a modular design. This allows us to easily insert new technology into our production line."

Future satellites – already with a robust, production-ready design -- also would benefit from the inherent risk-reductions already proven out in GPS III, like compatibility with OCX and the existing GPS constellation. Significant work has already been completed on future requirements like an accuracy-improving Laser Retro-reflector Array and a Search and Rescue payload.

For Lockheed Martin, the completion of GPS III SV01 is a major milestone on a challenging development program to design and build the most powerful GPS satellites ever envisioned.  With all major development risks behind them, the company is now in full production on ten GPS III satellites at its GPS III Processing Facility near Denver.

"Lockheed Martin's GPS III team owes much of its success to the Air Force's Back to Basics program," Stewart added. "We are proud to partner with the Air Force on this important program and look forward to launching the first GPS III satellite in 2018".

The GPS III team is led by the Global Positioning Systems Directorate at the U.S. Air Force Space and Missile Systems Center. Air Force Space Command's 2nd Space Operations Squadron (2SOPS), based at Schriever Air Force Base, Colorado, manages and operates the GPS constellation for both civil and military users.

The Air Force's "AFL" declaration is the final acceptance of Lockheed Martin's first GPS III Space Vehicle prior to its expected 2018 launch. GPS III SV01 will bring new capabilities to U.S. and allied military forces, and a new civil signal that will improve future connectivity worldwide for commercial and civilian users.

Today, Lockheed Martin is contracted for and is assembling 10 GPS III satellites at the company’s nearly 40,000 sq. ft. GPS III Processing Facility near Denver, Colorado. The $128 million, state-of-the-art, manufacturing factory was designed in a virtual reality environment to maximize production effectiveness and efficiency. Opened in 2011, the GPF includes a specialized cleanroom and test chambers designed to streamline satellite production.

As new technology emerges, or as the Air Force’s mission needs change, Lockheed Martin’s unique GPS III satellite was designed with a flexible, modular architecture to allow for the straight-forward, low-risk insertion of new capabilities.

The satellite’s design already incorporates the Air Force’s next GPS III satellite acquisition requirement for a Laser Retro-reflector Array and Search & Rescue payloads. Both of these were proven to preliminary design levels in 2013 and significant strides have already been made for Regional Military Protection (RMP).

Lockheed Martin is proud to be a part of the Air Force’s GPS III team. More than 250 aerospace industry companies from 29 states support us on GPS III.

The GPS III team is led by the Global Positioning Systems Directorate at the U.S. Air Force Space and Missile Systems Center. Air Force Space Command’s 2nd Space Operations Squadron (2SOPS), based at Schriever Air Force Base, Colorado, manages and operates the GPS constellation for both civil and military users.

Rocket and satellite preps on track for next Atlas 5 launch 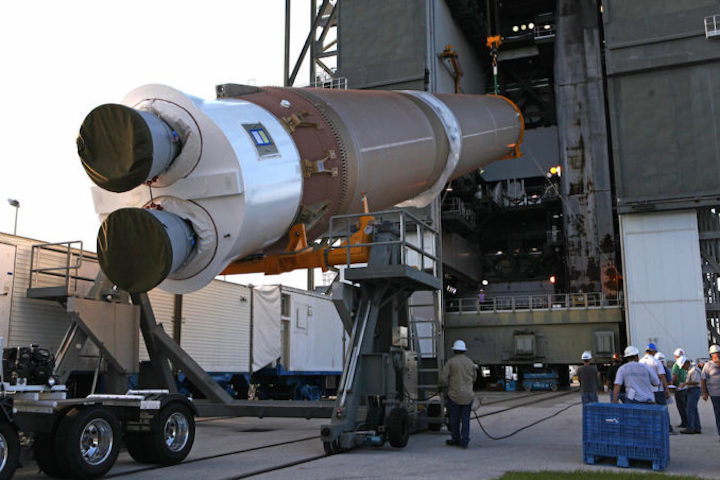 The Atlas 5’s first stage was stacked on top of a mobile platform inside the Vertical Integration Facility at Cape Canaveral’s Complex 41 launch pad early last week. It was to be followed by the hoisting of the Atlas 5’s Centaur upper stage and a single strap-on solid rocket booster.

The first Atlas 5 launch of 2018, and the 75th overall, will propel the Air Force’s fourth Space Based Infrared System satellite toward a perch in geostationary orbit approximately 22,300 miles (35,800 kilometers) over the equator.

The SBIRS GEO Flight 4 satellite, built by Lockheed Martin, will join three others launched since 2011 to provide early warning of missile launches heading for the United States and its allies, including those potentially carrying nuclear weapons. 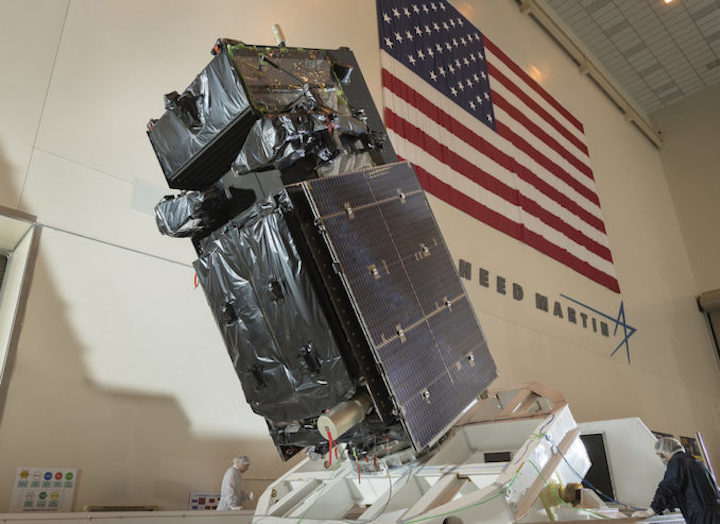 The Air Force has ordered two additional SBIRS geostationary spacecraft from Lockheed Martin for launch in the early 2020s.

“The delivery, launch, and successful operation of GEO Flight 4 will mark the fulfillment of the original SBIRS baseline constellation and reaffirm our commitment to provide our country, warfighters, and senior leaders with timely, reliable, and accurate missile warning and infrared surveillance information.” said Lt. Gen. John Thompson, commander of the Air Force Space and Missile Systems Center and Air Force program executive officer for space.

The SBIRS GEO Flight 4 satellite arrived at Cape Canaveral on Oct. 31 after a cross-country flight aboard an Air Force C-5 Galaxy cargo plane from its Lockheed Martin factory in Sunnyvale, California.

After completing post-shipment tests and other customary checks on the satellite, officials gave the go-ahead earlier this month to begin fueling the spacecraft with maneuvering propellant. The on-board fuel is required for the satellite to climb into its final circular geostationary orbit after a drop-off by the Atlas 5 rocket in an elliptical transfer orbit, then to keep the spacecraft operational throughout its 12-year design lifetime.

Once technicians finish fueling the satellite, it will be fixed to the Atlas 5’s payload adapter and enclosed inside its nose cone, then transported to the Complex 41 launch pad for attachment to the rocket.

The three previous SBIRS geostationary satellites launched in 2011, 2013 and in January aboard the basic “401” version of ULA’s Atlas 5 rocket, which does not use any solid rocket boosters. SBIRS GEO Flight 4 will launch with the Atlas 5-411 configuration, with a single solid rocket booster and a four-meter-diameter (13.1-foot) payload fairing.

The change will allow the Centaur upper stage to make a controlled de-orbit and re-entry after it releases the SBIRS GEO Flight 4 satellite, a measure to prevent the flight from adding to space debris in Earth orbit.