Astronomers using the Atacama Large Millimeter/submillimeter Array (ALMA) took a census of stellar eggs in the constellation Taurus and revealed their evolution state. This census helps researchers understand how and when a stellar embryo transforms to a baby star deep inside a gaseous egg. In addition, the team found a bipolar outflow, a pair of gas streams, that could be telltale evidence of a truly newborn star.

Stars are formed by gravitational contraction of gaseous clouds. The densest parts of the clouds, called molecular cloud cores, are the very sites of star formation and mainly located along the Milky Way. The Taurus Molecular Cloud is one of the active star-forming regions and many telescopes have been pointed at the cloud. Previous observations show that some cores are actually stellar eggs before the birth of stars, but others already have infant stars inside.

A research team led by Kazuki Tokuda, an astronomer at Osaka Prefecture University and the National Astronomical Observatory of Japan (NAOJ), utilized the power of ALMA to investigate the inner structure of the stellar eggs. They observed 32 starless cores and nine cores with baby protostars. They detected radio waves from all of the nine cores with stars, but only 12 out of 32 starless cores showed a signal. The team concluded that these 12 eggs have developed internal structures, which shows they are more evolved than the 20 quite cores. 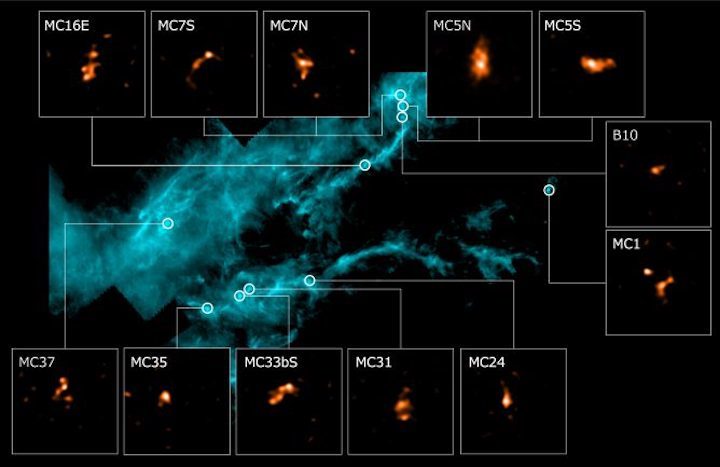 “Generally speaking, radio interferometers using many antennas, like ALMA, are not good at observing featureless objects like stellar eggs,” says Tokuda. “But in our observations, we purposely used only the 7-m antennas of ALMA. This compact array enables us to see objects with smooth structure, and we got information about the internal structure of the stellar eggs, just as we intended.”

They found that there is a difference between the two groups in the gas density at the center of the dense cores. Once the density of the center of a dense core exceeds a certain threshold, about one million hydrogen molecules per cubic centimeter, self-gravity leads the egg to transform into a star.

Computer simulation movie of the evolution of a dense core to a first hydrostatic core. The present ALMA observations detected the central dense part (shown in red). This simulation was made by the supercomputer ATERUI-II operated by NAOJ.
Credit: Tomoaki Matsumoto (Hosei University)

A census is also useful for finding a rare object. The team noticed that there is a weak but clear bipolar gas stream in one stellar egg. The size of the stream is rather small, and no infrared source has been identified in the dense core. These characteristics match well with the theoretical predictions of a “first hydrostatic core,” a short-lived object formed just before the birth of a baby star. “Several candidates for the first hydrostatic cores have been identified in other regions,” explains Kakeru Fujishiro, a member of the research team. “This is the first identification in the Taurus region. It is a good target for future extensive observation.”

Kengo Tachihara, an associate professor at Nagoya University mentions the role of Japanese researchers in this study. “Japanese astronomers have studied the baby stars and stellar eggs in Taurus using the Nagoya 4-m radio telescope and Nobeyama 45-m radio telescope since the 1990s. And, ALMA’s 7-m array was also developed by Japan. The present result is part of the culmination of these efforts.”

“We have succeeded in illustrating the growth history of stellar eggs up to their birth, and now we have established the method for the research,” summarizes Tokuda. “This is an important step to obtain a comprehensive understanding of star formation.”