Analysis of valley shapes might alter your mental image of a wet Mars. 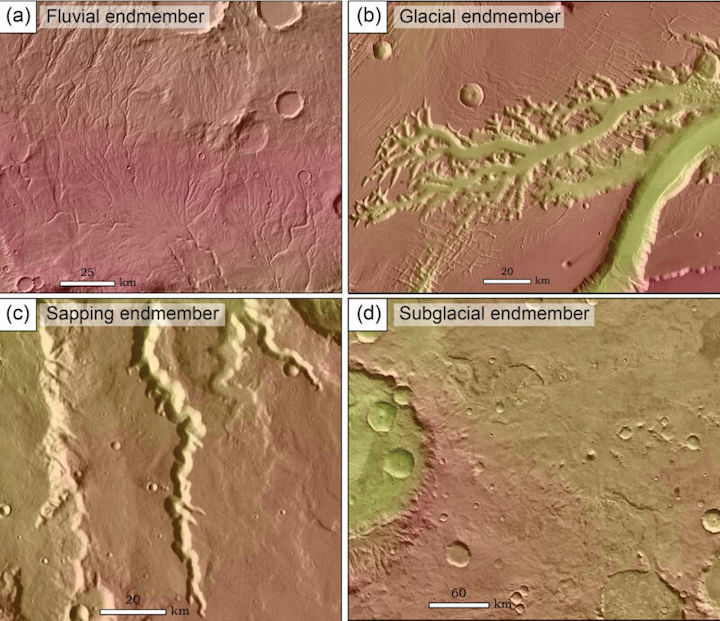 The further back into Earth’s history your mind wanders, the more work your imagination has to put in. That’s even more true for Mars. None of us have physically stepped foot on the present-day version of the planet, and its past was clearly very different from its present, with evidence pointing to flowing and standing water.

Among the relics of the watery past are networks of valleys incised into Mars’ surface. The Red Planet’s southern hemisphere highlands host many valleys, which have largely been interpreted as formed by rivers and groundwater springs. The source of water in rivers—whether rainfall in a warm climate or just melt from glacial ice—has been a question mark.

It’s thought that Mars’ past was generally quite cold, so a connection between the valleys and glacial ice is quite plausible. But how direct is that connection? We can identify the drainages in which water flows beneath ice sheets based on physical characteristics of the valleys left behind. So a team led by Anna Grau Galofre at Arizona State set out to analyze the valleys on Mars to see if any would better match a sub-glacial origin.

They worked with topographic data for over 10,000 valleys in almost 70 connected valley networks, characterizing each by a number of metrics. That includes some simple things, like valley width, the number of tributaries upstream, and the angle between connected channels. Another metric that turned out to be important is whether the valley undulates up and down a bit, or instead drops smoothly down-slope without interruption.

Combining all the metrics, the valleys fall into several clusters. There’s an indistinct area of overlap, meaning some valleys couldn’t be identified as one thing or another, but the others fell in line. Valley width, for example, is good at picking out valleys that are carved by glacial ice here on Earth. Simple channels with few tributaries indicate groundwater springs that trickle downhill. And sub-glacial drainage valleys tend to meet at angles closer to 90 degrees and undulate up and down—driven by high water pressure under a glacier.

Of the 66 networks of valleys, 18 couldn’t be identified and three looked like the result of groundwater springs. Only 14 were identifiable as formed by rivers. But nine valley networks had the characteristics of glacial erosion, and 22 fell under the sub-glacial drainage category.

To see if that made sense, the researchers compared the locations of the sub-glacial drainage valleys against a previously published ice sheet model. Glaciers and ice sheets have an upper, colder zone where snowfall accumulation dominates, and a lower, warmer zone where losses from melt or sublimation dominate. Sub-glacial drainages should exist in that lower zone, where meltwater is being produced. Laid out on a map, those 22 valley networks do generally sit in the region where the ice sheet model predicts they should—between the edge of the ice sheet and the “equilibrium line” that divides the melt zone from the accumulation zone.

The researchers think this ice sheet could have mostly been frozen to the ground, but with localized areas where friction or geothermal heat from below melted ice at the base. That would actually be a simple explanation for consistent sources of flowing water on a cold Mars, although it might paint an icier picture than the one you’ve had in your head.

“This picture alters the current understanding that all Martian valley networks originated by surface runoff and provides geomorphological support for the presence of ice sheets on early Mars,” the researchers write, “which reconciles climate predictions with observations from the geological record.”