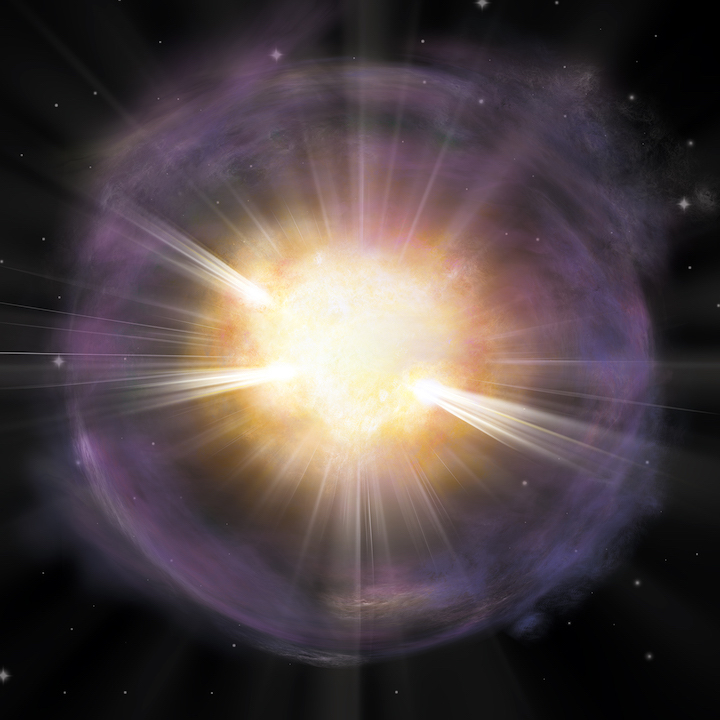 Astronomers using several telescopes at NOIRLab, including the Southern Astrophysical Research (SOAR) Telescope, have obtained critical data on a particular type of exploding star that produces copious amounts of calcium. The calcium produced in this unique type of supernova explosion is the same calcium found in our bones and teeth and these events account for up to half of the calcium found in the Universe.

Thanks to detailed observations using the SOAR Telescope, located on Cerro Pachón in Chile, and a host of telescopes around the world and in space [1], astronomers have been able to probe the inner workings of a special type of supernova explosion. These particular explosions, from compact stars that lose copious amounts of mass late in their lives, appear to create the element calcium in their last dying gasps — and it is dispersed by the explosion throughout galaxies like the Milky Way. SOAR is a facility of Cerro Tololo Inter-American Observatory (CTIO), a Program of NSF’s NOIRLab.

“Most massive stars create small amounts of calcium during their lifetimes, but events like SN 2019ehk appear to be responsible for producing vast quantities of calcium and in the process of exploding disperse it through interstellar space within galaxies. Ultimately this calcium makes its way into forming planetary systems,” according to Régis Cartier, an astronomer at NOIRLab and a member of the research team, “…and into our bodies in the case of our Earth!”

Raffaella Margutti, senior author of the study at Northwestern University, adds that prior to this event astronomers had only indirect information on these events, called calcium-rich supernovae. “With this direct evidence, we can now confidently rule out the production of calcium-rich supernovae by the vast majority of massive stars,” said Margutti.

“By observing what this star did in its final month before it reached its critical, tumultuous end, we peered into a place previously unexplored, opening new avenues of study,” said Wynn Jacobson-Galan, of Northwestern University, who led the study. The results are published in the 5 August issue of The Astrophysical Journal, which included contributions from a huge collaboration of nearly 70 co-authors from over 15 countries.

The SOAR data were critical to the result. In particular, the infrared spectrum acquired with SOAR, only the second ever obtained of a calcium-rich supernova, opened a new window on the kind of elements expelled by the supernova — elements such as helium, carbon, magnesium and calcium, all of which have a clear spectral fingerprint at infrared wavelengths. Understanding how much and what kind of elements are expelled by a supernova provides critical clues to the nature of the explosion — what kind of star exploded and how it exploded. It also provides insights into how calcium-rich supernovae produce so much calcium. While that interesting question remains an open issue, the SOAR observations represent some of the first steps toward an answer.

“Because these events are so rare, and difficult to detect because they are faint, we don’t have a lot of data on which to base our theories about what happens as these stars expel material in their death throes,” said Cartier.

The explosive event occurred in the relatively nearby galaxy known as Messier 100 which is a popular target for amateur astronomers and is readily visible through small telescopes. In fact, it was amateur astronomer Joel Shepherd who first spotted the light from the exploding star while stargazing in Seattle on 28 April 2019, and soon thereafter it was designated SN 2019ehk. Messier 100 is a beautiful spiral galaxy similar to our Milky Way and is located some 55 million light-years away towards the constellation of Coma Berenices (Berenice’s Hair) in the northern sky near the constellation of Ursa Major (The Great Bear) which contains the Big Dipper.

According to Jacobson-Galan, once the discovery was announced telescopes around the world and in space were pointed at the exploding star.

Augmenting optical and infrared observations like those by SOAR, X-ray observations revealed a flood of high-energy X-rays from SN 2019ehk — the first time they were observed in a calcium-rich supernova. According to the researchers, nobody had ever thought to look at this type of explosion in X-ray light so soon after it occured.

The combination of observations by SOAR and other telescopes led to the team’s conclusion that this calcium-rich supernova was a compact star that expelled an outer layer of gas as it expired. When it exploded its expelled material collided with surrounding material in its outer shell and the extremely hot temperatures produced X-rays and powered the chemical reactions that make calcium.

The SOAR Telescope’s role in studying this event reflects its evolution toward preparations for the massive Legacy Survey of Space and Time (LSST), which will be carried out at the nearby Vera C. Rubin Observatory, also sited on Cerro Pachón. As SOAR Director Jay Elias explained, “The SOAR Telescope is a flexible platform, designed to be able to respond quickly to unexpected astronomical events like this one. In recent years, SOAR has observed many such transient events discovered by large-area surveys in order to probe the nature of those events. We are continually working to increase the telescope’s efficiency and agility as we prepare for the start of LSST.”

“This type of science, which is critically time-dependent, is an important aspect of where astronomy is heading,” said Edward Ajhar of the US National Science Foundation. “Future facilities such as the Rubin Observatory will discover thousands of transient events like this and will keep astronomers busy making many new discoveries.”

Astronomie - Astronomers Sink Their Teeth Into Special Supernova — Calcium-rich supernovae, a unique type of exploding stars, produce up to half of the calcium in the Universe
« Zum vorherigen Eintrag Zum nächsten Eintrag »
720 Views
Created with page4