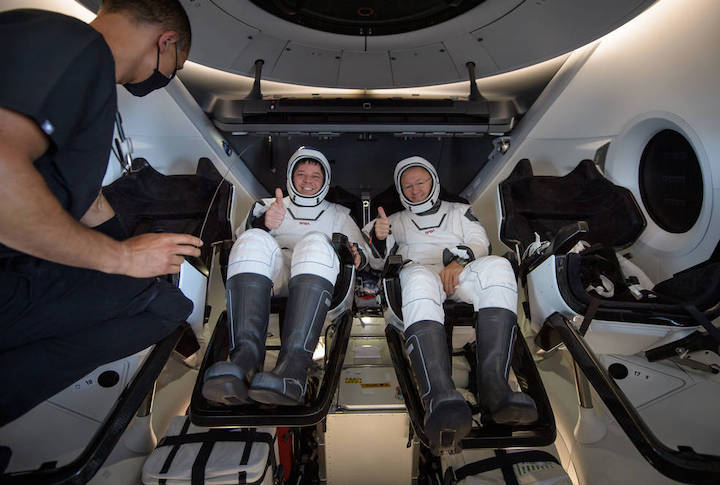 NASA astronauts Robert Behnken, left, and Douglas Hurley are seen inside the SpaceX Crew Dragon Endeavour spacecraft onboard the SpaceX GO Navigator recovery ship shortly after having landed in the Gulf of Mexico off the coast of Pensacola, Florida, Sunday, Aug. 2, 2020. The Demo-2 test flight for NASA's Commercial Crew Program was the first to deliver astronauts to the International Space Station and return them safely to Earth onboard a commercially built and operated spacecraft. Behnken and Hurley returned after spending 64 days in space.
Credits: NASA/Bill Ingalls

The news conference from NASA’s Johnson Space Center in Houston will be broadcast live on NASA Television and on the agency’s website.

This will be a virtual event with no media present, due to the safety restrictions related to the ongoing coronavirus (COVID-19) pandemic. Reporters who wish to participate by telephone must call Johnson's newsroom at 281-483-5111 to RSVP no later than 2:30 p.m. Tuesday, Aug. 4. Those following the briefing on social media may ask questions using the hashtag #AskNASA.

SpaceX’s Crew Dragon, carrying Behnken and Hurley, splashed down at 2:48 p.m. Sunday under parachutes in the Gulf of Mexico, off the coast of Pensacola, Florida, and was successfully recovered by SpaceX. After returning to shore, the astronauts immediately flew back to Houston, where they were greeted by their families and invited guests – including NASA Administrator Jim Bridenstine and SpaceX Chief Engineer Elon Musk – at a welcome home ceremony.

Behnken and Hurley contributed more than 100 hours to scientific experiments and participated in numerous public engagement events during their 62 days aboard the station. Behnken conducted four spacewalks with Expedition 63 Commander and NASA colleague Chris Cassidy to upgrade two power channels on the station’s truss with new lithium-ion batteries. Overall, the astronaut duo spent 64 days in orbit, completed 1,024 orbits around Earth and traveled 27,147,284 miles.

This was SpaceX’s final test flight and will provide data about the performance of the Falcon 9 rocket, Crew Dragon spacecraft and ground systems, as well as in-orbit, docking, splashdown, and recovery operations. The data will inform NASA’s certification of the SpaceX crew transportation system for regular flights carrying astronauts to and from the space station. SpaceX is readying the hardware for the first rotational mission, which is scheduled to occur following NASA certification. NASA astronauts Michael Hopkins, Victor Glover, Jr., and Shannon Walker, as well as Soichi Noguchi of the Japan Aerospace Exploration Agency (JAXA), are assigned to the first operational flight of Crew Dragon and spend six months aboard the station.

NASA’s Commercial Crew Program works with the U.S. aerospace industry to develop safe, reliable, and cost-effective crew transportation systems that will carry astronauts on American rockets and spacecraft from American soil to the International Space Station, and back. A successful Commercial Crew Program could allow for additional research time and increase the opportunity for discovery aboard humanity’s testbed for exploration, including helping us prepare for human exploration of the Moon and Mars.