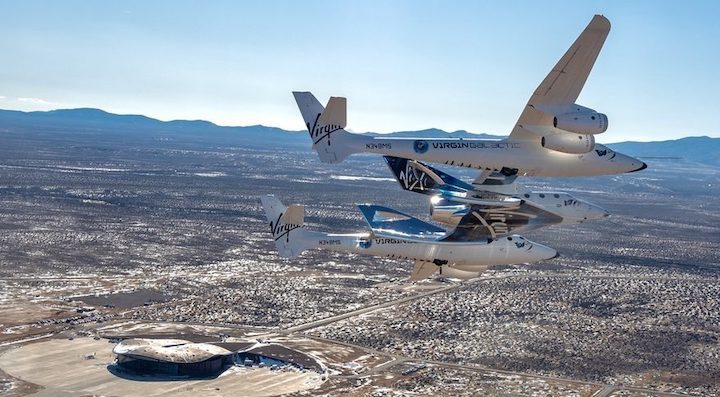 WASHINGTON — Virgin Galactic executives suggested Feb. 25 that the beginning of commercial flights of its SpaceShipTwo suborbital vehicle might slip again, even as the company starts planning to resume ticket sales.

The company, which became publicly traded in October after closing a merger with special-purpose acquisition company Social Capital Hedosophia, released its fourth quarter and full year 2019 financials after the markets closed Feb. 25, showing, as expected, a significant loss as the company continues development and testing of SpaceShipTwo.

Virgin Galactic reported a net loss of nearly $211 million on revenue of about $3.8 million for 2019. That revenue came from flights of research payloads on SpaceShipTwo test flights as well as unspecified engineering services. The company had adjusted earnings before interest, taxes, debt and amortization (EBITDA) of –$187 million for 2019, compared to an adjusted EBITDA of –$132 million in 2018.

The company’s net loss in the fourth quarter of 2019 was $72.8 million, compared to a net loss of $51.5 million in the third quarter. Jonathan Campagna, Virgin Galactic’s chief financial officer, said in a conference call with analysts that the company had additional expenses in the fourth quarter associated with compliance costs of being a public company, as well as with moving personnel and equipment to Spaceport America in New Mexico and with outfitting the cabin of its existing SpaceShipTwo vehicle, VSS Unity.

The company projects those losses to quickly turn to profits once SpaceShipTwo enters commercial service, with an increasing number of flights as the company gains experience and puts additional vehicles into operation. In an investor presentation in September 2019, the company projected positive EBITDA in 2021, growing to $274 million in 2023.

Those projections assumed the start of commercial operations in June 2020, but during the call George Whitesides, chief executive of Virgin Galactic, hinted that commercial service, already delayed by years, might slip again.

“We continue to focus on our top priority of the year, which is to fly Richard Branson into space on a commercial flight,” he said. Branson, founder of Virgin Galactic, has long said he will be on the company’s first commercial flight.

However, there may be few, if any, additional commercial flights in the year. “While we would like to have some commercial revenue this year, the main focus for this year, from a company and engineering perspective, is working to get the vehicles, and our operations, prepared for long-term, regular commercial service,” Whitesides said. That includes completing the flight test program for SpaceShipTwo, optimizing the “end-to-end customer experience” that includes events before and after each flight, and readying the vehicles for long-term, high-flight-rate operations.

Asked by analysts on the conference call about the schedule, including that prior plan to begin service in June 2020, Whitesides emphasized his earlier comments. “What we’re affirming today is that our number one priority is to fly Richard Branson into space on a commercial flight in 2020,” he said.

Whitesides didn’t discuss any technical issues with VSS Unity, the SpaceShipTwo vehicle relocated to Spaceport America in New Mexico for final tests Feb. 13. He said the company had completed 20 of 29 milestones in a “verification and validation” program with the Federal Aviation Administration that will clear the way for final approval for flying commercial customers on the vehicle. However, he added it may be possible that Unity will return to Virgin Galactic’s manufacturing facility in Mojave, California, “one or two times” for additional work before starting commercial service.

In past regulatory filings, the company said it has sold 603 tickets. Whitesides said the company formally closed that initial round of ticket sales after SpaceShipTwo’s first flight to the edge of space in December 2018, although sales effectively ended after an October 2014 crash that destroyed the first SpaceShipTwo and killed co-pilot Michael Alsbury.

The company is preparing to reopen ticket sales in the near future. Virgin Galactic announced Feb. 25 that it will start offering potential customers an opportunity to go to the front of the line when ticket sales resume. The company said it has received nearly 8,000 “registrations of interest in flight reservations,” primarily through its website. That figure has more than doubled since September 2019.

Virgin Galactic said it will allow potential customers to sign up for its “One Small Step” program, paying a refundable deposit of $1,000 applicable to a future ticket sale. Participants in the program, which will start taking reservations Feb. 26, will get the first opportunity to purchase tickets, although the company has not announced when it will start selling tickets again or their price.

The One Small Step program “marks a significant milestone as we prepare to reopen ticket sales,” Whitesides said. For Virgin Galactic, the program will support its sales funnel and create “a pool of qualified prospects” for later ticket sales.

While the company didn’t announce pricing, Whitesides confirmed later in the call that those tickets will be more expensive than past sales, which cost up to $250,000 per ticket. “We think that’s justified by the extreme interest that we’re seeing as well as the great product that we’ll be offering,” he said. The number of new tickets the company will sell, as well as its “premium pricing strategy,” will be disclosed later this year, he added.

Analysts also asked Whitesides about the company’s stock price, which has soared in recent weeks. After falling to as low as $7 a share late last year, the stock rose to as high as $37.35 per share at the close of trading Feb. 19. The stock closed Feb. 25 at $34.04 per share, down a fraction of a percent over the day despite a much steeper selloff in the broader market triggered by concerns about the effects the COVID-19 coronavirus outbreak will have on the global economy.

Whitesides declined to discuss the stock’s recent rise. “We’re just going to keep executing,” he said. “I run a team full of space engineers, and what we’re best at is just keeping our heads down and focused on the engineering.”