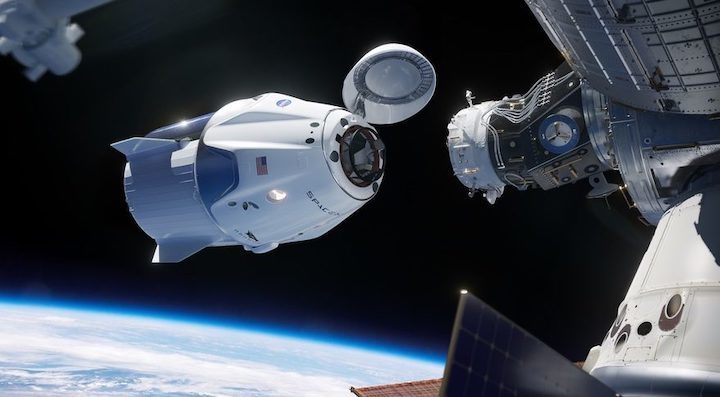 WASHINGTON — NASA is leaning increasingly towards making SpaceX’s crewed test flight to the International Space Station a long-duration mission, a move that could alleviate concerns about a lack of crew on the station later this year.

NASA’s Johnson Space Center released Feb. 22 images of NASA astronauts Bob Behnken and Doug Hurley training for their upcoming Demo-2 mission to the station on SpaceX’s Crew Dragon spacecraft. That included Behnken in a spacesuit, training for spacewalks in the center’s Neutral Buoyancy Laboratory, while Hurley worked on robotics training.

“The last week NASA Johnson included EVA and robotics training as well as medical testing and training,” said Hurley in a tweet referencing one from JSC. “We also had a day of SpaceX lessons here in Houston. Headed back to California next week. More Crew Dragon training!”

The original plans for the Demo-2, also known as DM-2, mission called for the flight to be a relatively short one, spending no more than a couple weeks at the station. In recent months, though, agency officials have suggested that they might extend the mission for months in order to have more astronauts on the station. The station’s crew will be at just three people, including one NASA astronaut, Chris Cassidy, starting in roughly mid-April.

“We might look at making that first crew be a longer duration crew for the purpose of getting the maximum amount of capability out of the International Space Station,” NASA Administrator Jim Bridenstine said at a Jan. 19 press conference after the successful in-flight abort test of the Crew Dragon spacecraft.

In order to extend it, he said, the crew would need additional training, such as for spacewalks. “It also gives us the opportunities to do extravehicular activities that may not right now be scheduled but may pop up based on things that happen on the ISS,” he said. “It’s always better to have more crew on board to do those activities rather than less.”

Bridenstine added that no decision had been made yet, and that a decision would come in several weeks. The spacewalk training by Behnken — who performed six spacewalks on two space shuttle missions in 2008 and 2010 — is evidence that NASA is, at the very least, continuing to preserve that option, if it has not made a decision.

One former astronaut said he believes NASA has already decided to extend the Demo-2 mission. Garrett Reisman, a former astronaut and SpaceX employee who is now a professor at the University of Southern California and an advisor to SpaceX, said Feb. 23 that Behnken and Hurley “are being trained for a long-duration mission as ISS crewmembers. This is a change from the original plan to do a min. duration test flight, driven by NASA needs to staff the ISS.”

Another factor in any decision to extend Demo-2 is the status of the other commercial crew vehicle, Boeing’s CST-100 Starliner. That vehicle flew an uncrewed test flight in December, but software problems during the flight, including one which shortened the mission and prevented a docking with the ISS, have raised questions about whether a second uncrewed test flight will be needed. An investigation into those problems is expected by the end of this month.

Even if NASA decides a second uncrewed test flight of Starliner is not needed, a review of all of the spacecraft’s one million lines of code, and other reviews, is likely to delay a crewed test flight of the spacecraft. NASA and Boeing had previously agreed to make that test flight a long-duration mission, with NASA astronauts Mike Fincke and Nicole Mann and Boeing astronaut Chris Ferguson performing space station training in addition to that for the Starliner itself.

The additional training needed for a long-duration mission could delay the Demo-2 launch, although it’s not clear by how much. SpaceX Chief Executive Elon Musk said at that January press conference that while the spacecraft should be ready in the first quarter, final reviews and other assessments made it likely the mission would take place in the second quarter of this year. The Crew Dragon spacecraft arrived in Florida earlier this month for final tests and launch integration activities.

“Like all NASA astronauts, we’ll be ready for whatever Space Station needs during our visit,” Behnken tweeted Feb. 23 in response to the JSC training photos. “These photos are just some of the recent training for NASA’s & SpaceX’s DM2 test flight. But for some reason, housekeeping (our top skill!) didn’t make the highlights…”