They may have erupted in the last few years! 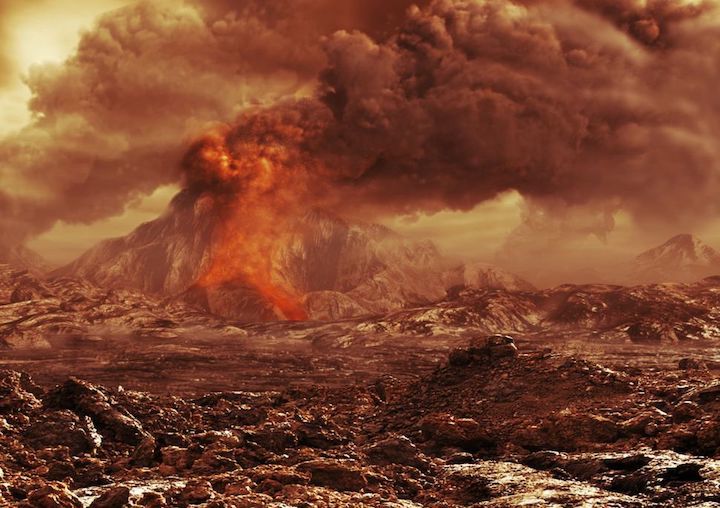 An artist's illustration of volcanoes on Venus. A new study suggests Venus may have harbor active volcanoes today, with eruptions in recent years.
(Image: © ESA/AOES)

Venus may still harbor active volcanoes, with eruptions taking place as recently as a few years ago, a new study finds.

Aside from Earth, the only other place known to host active volcanoes that spew lava is Jupiter's moon Io. Mars and Earth's moon once had active volcanoes, but they died long ago.

Still, there are hints that Venus might harbor active volcanoes, such as traces of sulfurous gases seen in its atmosphere. In addition, about a decade ago, scientists analyzing data from the European Space Agency's Venus Express probe suggested that some of the lava flows on Venus are less than 2.5 million years old, and possibly even less than 250,000 years old.

Specifically, in 2010, researchers found unusually high emissions of visible to near-infrared light from a number of sites on Venus. Surface regions that are old are expected to have lower emissions of such light after long exposure to weathering from Venus' hot, caustic atmosphere, so these patches of higher emissions hinted at recent lava flows.

However, the exact ages of these lava flows remain uncertain. This is because much is unknown about how quickly volcanic rocks alter in response to Venus' harsh atmosphere and how such changes influence emissions of visible to near-infrared light.

To see if lava flows seen on Venus are recent, scientists experimented with crystals of olivine, a green mineral commonly found in volcanic rock. They focused on how these crystals altered under conditions similar in some ways to what they might experience on the surface of Venus.

The researchers heated olivine along with regular Earth air in a furnace up to 1,650 degrees Fahrenheit (900 degrees Celsius) for up to a month. They found olivine became coated within days mostly with the reddish-black mineral hematite, which in turn made certain features of olivine more difficult to detect.

Since the ESA's Venus Express, which orbited Venus from 2006 to 2014, apparently could detect signs of olivine even from orbit, these new findings suggested that such olivine came from volcanic eruptions recently, as otherwise chemical reactions with Venus' atmosphere would have obscured it.

"This is the first time we may have seen active volcanism on another planet," study lead author Justin Filiberto, a planetary scientist at the Universities Space Research Association's Lunar and Planetary Institute in Houston, told Space.com.

The researchers are now following up on their research with other volcanic minerals baked in air more similar to Venus' atmosphere — that is, laden with carbon dioxide and sulfur. "The results with those are pretty much the same," Filiberto said.

The scientists detailed their findings online Jan. 3 in the journal Science Advances.

Astronomie - There May Be Active Volcanoes on Venus: New Evidence
208 Views
Created with page4