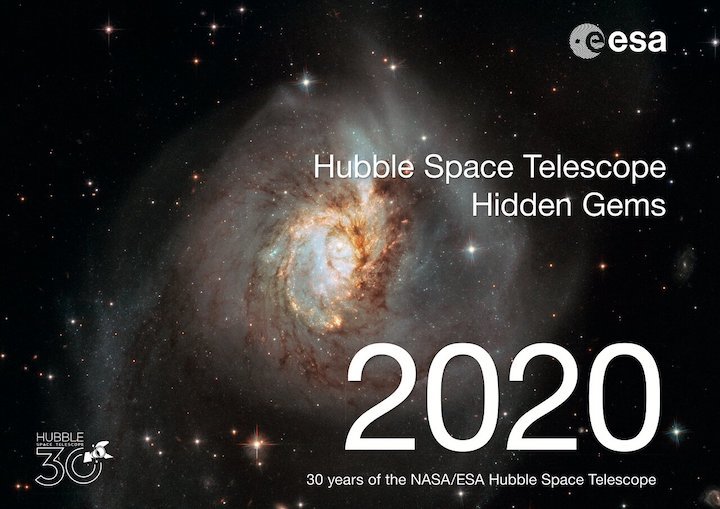 In April 2020, the NASA/ESA Hubble Space Telescope will celebrate 30 years since its launch. ESA/Hubble has produced a commemorative calendar of the telescope’s Hidden Gems that is now available for everyone to use and enjoy.

In September 2019, ESA/Hubble announced a special social media initiative to celebrate three decades of success in scientific discoveries, engineering accomplishments and cultural impact with the NASA/ESA Hubble Telescope. The campaign showcased 30 hidden gems from the ESA/Hubble image archive that are not as well known as the Top 100 Images, but are also truly beautiful. From September to November 2019, 30 special #Hubble30 images were shared on ESA/Hubble’s Facebook and Instagram accounts. The 12 images that received the most likes counted from both platforms were compiled to produce a special 30th Anniversary Calendar for 2020. The special 30th anniversary calendar can now be accessed electronically for anyone to print, share and enjoy.

The images featured in the calendar are described below:

Cover: The calendar’s cover features the distorted  galaxy NGC 3256. It is a relic of a collision between two spiral galaxies, estimated to have occurred 500 million years ago.

January: In 2014, astronomers conducted a study called the Ultraviolet Coverage of the Hubble Ultra Deep Field project. This picture is the result of 841 orbits of telescope viewing time and contains approximately 10 000 galaxies.

March: A special image of IRAS 14568-6304 features a young star that is cloaked in a haze of golden gas and dust. In the image, appears to be embedded within an intriguing swoosh of dark sky, which curves through the image and obscures the sky behind.

April: One of the largest gatherings of hot, massive and bright stars in the Milky Way is the star cluster Trumpler 14. A 2016 Hubble image captured the cluster, which houses some of the most luminous stars in our galaxy.

May: A 2011 snapshot features the fine detail and exceptionally perfect spiral structure of NGC 634, located 250 million light years away in the constellation of Triangulum.

June: The 2011 composite image of Sh 2-106 highlights a compact star forming region in the constellation of Cygnus, which combines two images taken in infrared light and one that is tuned to a specific wavelength of visible light emitted by excited hydrogen gas.

July: A 2018 composite image of the ringed planet Saturn is pictured with six of its 82 known moons: Dione, Enceladus, Tethys, Janus, Epimetheus, and Mimas.

August: The structure visible within NGC 5189 is particularly dramatic, and a 2012 Hubble image unveiled new details of the object. The intricate structure of the stellar eruption looks like a giant and brightly coloured ribbon in space.

September: A colourful and star-studded view of the Milky Way galaxy was captured in 2016 when Hubble pointed its cameras towards the constellation of Sagittarius.

October: In January 2002, a moderately dim star known as V838 Monocerotis in the constellation of Monoceros, suddenly became 600 000 times more luminous than our Sun. A Hubble snapshot shows remarkable details in the shells of dust that were lit up during the titanic stellar eruption.

November: In 2011, Hubble captured a stunning close-up shot of part of the Tarantula Nebula. This is a star-forming region rich in ionised hydrogen gas in the Large Magellanic Cloud, a small galaxy which neighbours the Milky Way.

December: The Hubble telescope revealed a rainbow of colours in the dying star IC 4406 in a beautiful 2002 image. Like many other planetary nebulae, IC 4406 exhibits a high degree of symmetry. The nebula's left and right halves are nearly mirror images of each other.

The Hubble Space Telescope is a project of international cooperation between ESA and NASA.