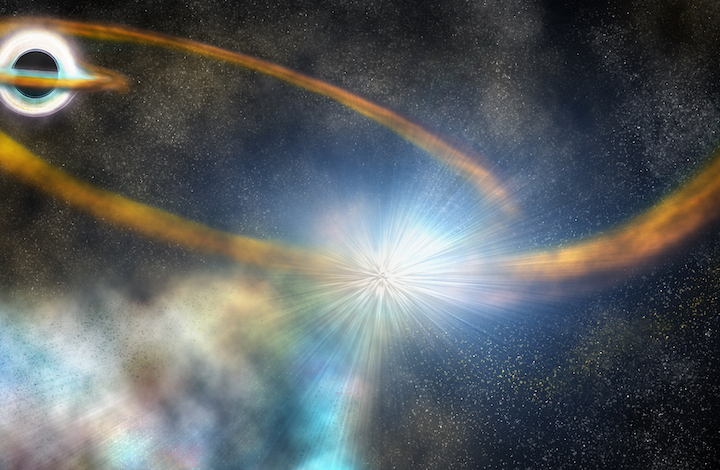 After passing too close to a supermassive black hole, the star in this artist's conception is torn apart into a thin stream of gas, which is then pulled back around the black hole and slams into itself, creating a bright shock and ejecting more hot material. Illustration is by Robin Dienel, courtesy of the Carnegie Institution for Science.

Pasadena, CA—NASA’s Transiting Exoplanet Survey Satellite (TESS) has for the first time seen the aftermath of a star that was violently ripped apart by a supermassive black hole. Catching such a rare event in action will help astronomers understand these mysterious phenomena.

The observation is reported in The Astrophysical Journal by a team of astronomers led by Carnegie’s Thomas Holoien, who is a founding member of the international network of telescopes that made the discovery—the Ohio State University based All-Sky Automated Survey for Supernovae (ASAS-SN).

Tidal disruption events, or TDEs, occur when a star gets too close to a supermassive black hole—objects with immense gravitational pull that are thought to lie at the center of most large galaxies. The black hole’s forces overwhelm the star’s gravity and tear it to shreds. Some of its material gets flung out into space and the rest falls back onto the black hole, forming a disk of hot, bright gas as it is consumed.

By observing the light given off during this process, which increases to a peak brightness and then tapers off, astronomers can better understand the physics of the black hole and the forces driving these phenomena.

TESS was able to provide complementary observations of this newfound TDE, called ASASSN-19bt, which show its evolution with unprecedented detail. The spacecraft’s extremely wide field-of-view and continuous coverage make it a great tool for detecting and monitoring TDEs.

“Only a handful of TDEs have been discovered before they reached peak brightness and this one was found just a few days after it started to brighten; plus, thanks to it being in what’s called TESS’ ‘Continuous Viewing Zone,’ we have observations of it every 30 minutes going back months—more than ever before possible for one of these events,” said Holoien. “This makes ASASSN-19bt the new poster child for TDE research.”

Because the discovery team rapidly triggered follow-up observations of ASASSN-19bt by both space- and ground-based telescopes, they were able to garner a very complete picture of the TDE.

“I was actually observing at Carnegie’s Las Campanas Observatory on the night of the discovery,” Holoien added. “So, I was able to take spectra with our du Pont and Magellan telescopes less than a day after the event was first seen in South Africa by part of ASAS-SN’s network.”

Spectra separate the light from a celestial object or event into its component wavelengths, like a window prism making a rainbow when sunlight passes through it. This can reveal information about the speed and chemical composition of material from the chewed-up star.

The team—which also included Carnegie’s Decker French, Thomas Connor, Nidia Morrell, Andrew Newman, and Gwen Rudie, as well as Carnegie-Princeton Fellow Rachael Beaton—was able to follow the TDE’s evolution from 42 days before its peak brightness, tracking it backward from the night the event was discovered. The data they report in their paper continues through 37 days post-peak, but they have taken a lot more observations in the subsequent months, too.

“It was once thought that all TDEs would look the same. But it turns out that astronomers just needed the ability to make more detailed observations of them,” said Patrick Vallely of Ohio State, who is the second author on the paper. “Recent sky survey projects like ASAS-SN have revealed new features of TDEs that we have not seen before—although we don’t have enough information yet to say whether these variances are common. We have so much more to learn about how they work, which is why capturing one at such an early time and having the exquisite TESS observations was crucial.”

It turns out that ASASSN-19bt is unusual in several of ways.

Its host galaxy is younger and more dust-filled than has previously been observed for other TDE events. Secondly, it experienced a short blip of cooling and fading before its temperature leveled off and its luminosity continued to build toward its peak.

Overall, however, the increase in brightness as ASASSN-19bt approached its peak was extremely smooth with very little variation—something that was not known about TDEs before the TESS data enabled researchers to see one with such detail. This information will improve astronomers’ ability to identify TDEs and differentiate them from other celestial events that have a much choppier emission of light.

“Having so much data about ASASSN-19bt will allow us to improve our understanding of the physics at work when a star is unlucky enough to meet a black hole,” said French.

Funding for the TESS mission is provided by NASA’s Science Mission directorate.

ASAS-SN is supported by the Gordon and Betty Moore Foundation, the NSF, the Mt. Cuba Astronomical Foundation, the Center for Cosmologyand AstroParticle Physics at the Ohio State University, the Chinese Academy of Sciences South America Center for Astronomy (CASSACA), the Villum Foundation, and George Skestos.