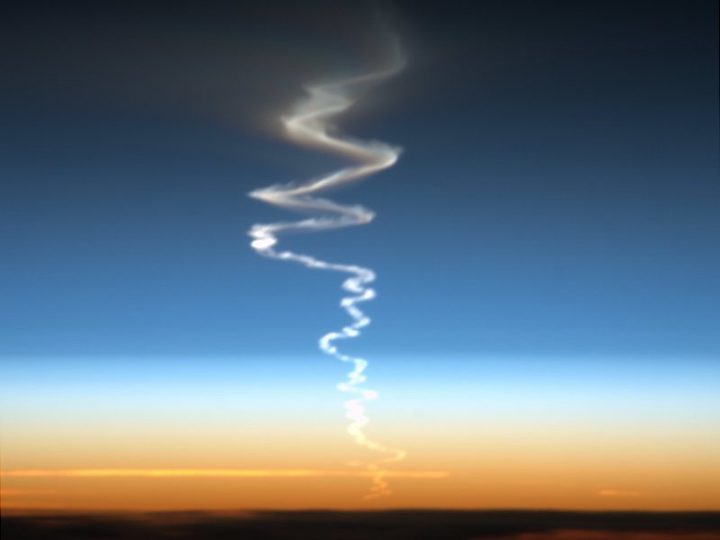 The global space industry is on the verge of a great increase in the number of rockets launched into Earth orbit. The global launch rate has already more than doubled in the past decade. Transformational innovations such as rocket reusability, thousand-satellite constellations, space tourism, global surveillance, tracking of the Internet of Things, proliferated low-Earth-orbit constellations, and other emerging technologies are expected to further supercharge launch demand in coming decades. The space industry, already an indispensable part of the global economy, is preparing for a surge in growth of a kind not seen since the birth of the space age.

As the number of launches increases, rocket engine emissions increase in proportion. Rocket engine exhaust contains gases and particles that can affect Earth’s climate and ozone layer. These emissions historically have been assumed to be not much of a threat to the global environment because the space industry was deemed small and unchanging. Whether that assumption holds true for today’s rapidly growing space is an important question that needs scientific attention.

The Nature of Rocket Emissions

The various rocket engine propellants produce different emissions. The most common gaseous emissions are water vapor and carbon dioxide from liquid and solid fuels, as well as hydrochloric acid from only solid fuels. The global quantities of these gas emissions from rockets, even at increased launch rates, do not significantly affect the global climate or ozone layer, and they are dwarfed by atmospheric inputs from other sources [Larson et al., 2017].

Because of the unique nature of their combustion chemistry, rocket engines emit large amounts of black carbon when compared to, for example, a modern jet engine.
As an important aside, water vapor emissions from individual launches can notably impact the mesosphere and ionosphere. Increased polar mesospheric cloud blooms, attributed to specific launches, have been frequently observed [Stevens et al., 2012]. Transient dropouts in electron content have also been observed in expanding ionospheric plumes, mainly from their impact on space-based navigation signals. Although not presently a global concern, at some increased launch rate, upper atmosphere launch plumes will become ubiquitous and so affect global mesospheric and ionospheric processes and properties.

Particulate emissions from rockets, on the other hand, could have important impacts on climate and ozone [Ross and Sheaffer, 2014; Voigt et al., 2013]. Rocket engines emit various amounts of submicrometer-sized particles of soot (or black carbon, BC) and alumina (aluminum oxide) directly into the stratosphere. Because of the unique nature of their combustion chemistry, rocket engines emit large amounts of BC when compared to, for example, a modern jet engine. During flight through the stratosphere, BC can account for as much as several percent of the rocket emissions [Simmons, 2000]; the equivalent measure for a modern jet engine is smaller by a factor of 100. In 2018 BC-producing rockets (all but the hydrogen fuel type) emitted about 225 tons of BC particles into the stratosphere, comparable to the annual amount of BC emitted by global aviation [Stettler et al., 2013]. Meanwhile, solid-fueled rockets emitted about 1,400 tons of alumina particles into the stratosphere.

Because particles emitted by rockets are small, they reside for 3 to 4 years in the stratosphere, where they accumulate. The “black” BC particles absorb solar radiation and slightly reduce Earth’s albedo. The “white” alumina particles reflect solar radiation and so increase the albedo slightly. Paradoxically, however, both have the same consequence for the underlying atmosphere: a reduction in the intensity of solar flux entering the top of the troposphere. Solar flux reductions caused by stratospheric particles are well understood to cool the lower atmosphere [Caldeira et al., 2013]. Therefore, and perhaps unexpectedly, rocket launch emissions contribute to cooling of Earth’s lower atmosphere and surface.

Globally averaged, present-day rocket particle accumulations cool the troposphere by about 0.02 watt per square meter [Ross and Sheaffer, 2014], whereas carbon dioxide emissions from global aviation warm the troposphere by about 0.03 watt per square meter [Lee et al., 2009]. Although these two effects involve different physics, the comparison nevertheless provides a useful context for understanding the relative magnitude of the climate impact of rocket launches. The magnitude of present-day cooling from rocket particles is about the same as the magnitude of warming from aviation carbon dioxide. In other words, rocket launches cool Earth’s surface by about the same amount that aviation warms it.

It would be an overinterpretation to conclude that rocket cooling mitigates some greenhouse gas (GHG) warming. Research shows that Earth responds to stratospheric particle injections in complex ways, with some atmospheric regions becoming warmer and others cooler, on subglobal and subseasonal scales [Kravitz et al., 2012]. Similarly, Earth will respond to rocket particle injections in complex ways. Unraveling this complexity and accurately assessing the potential effects of the coming surge in rocket emissions require sophisticated computer modeling efforts. Such efforts have yet to be realized.

Past Is Not Prologue

If particles emitted by rocket engines can affect climate and ozone, why have they not been the focus of much research?

With 114 launches in 2018, the number of launches has been growing at an average rate of about 8% per year for the past decade. Rocket emissions have also been growing.
The answer is, in part, related to the history of rocket launches. The annual rate of rocket launches increased rapidly after the start of the space age, peaking at 157 launches in 1967. But then it declined over the next 4 decades, decreasing to only 42 launches in 2005. So for most of the past half century, rocket emissions have been in decline and therefore were not of much interest to researchers working to understand the most significant aspects of climate change and ozone depletion.

But that historic trend reversed in 2005 and, despite the retirement of the Space Shuttle in 2011, launch numbers began rising again. With 114 launches in 2018, the number of launches has been growing at an average rate of about 8% per year for the past decade. Rocket emissions have also been growing, faster than global emissions from other sources with comparable impacts, such as aviation. And this growth is expected to accelerate.

Dozens of companies and government agencies around the world are planning to launch and maintain tens of thousands of satellites in vast low–Earth orbit constellations over the next decade [Cates et al., 2018]. Several of the constellations have already started deployment. Even if only half of these plans are successful, the U.S. launch rate alone will double to about 200 launches per year by 2025. Following the historical pattern, other spacefaring nations will develop and launch similar satellite systems, adding roughly an additional 200 annual launches, meaning a scenario with 400 orbital launches per year globally by 2030 is very plausible.

The global impact of 400 rocket launches per year is unknown. The series of models required to investigate this scenario have not been run, and the required plume measurements have not been made. In fact, only one detailed model of rocket BC particle emissions has ever been run—by us and a third colleague [Ross et al., 2010]. This lone effort provided surprising, if as yet unverified, clues.

The 2010 global climate model study considered rocket BC emissions of 600 tons per year, more than double the current BC emissions of about 225 tons. Run for 40 model years to ensure the model reached steady state, the stratospheric BC burden grew to 2,400 tons. Although the globally averaged surface temperature anomaly was small and not statistically significant, on smaller scales and over limited latitude bands, significant positive and negative temperature anomalies emerged. North polar surface temperatures increased by more than 1°C, and upward of 5% of polar sea ice coverage was lost. And beneath the main BC accumulation in the northern midlatitudes (around the latitude of the assumed launch site at 33°N), the surface cooled by 0.5°C.

The complexity and magnitude of the predicted changes, for a mere 600 tons of annual BC emission per year, were remarkable.  But we emphasize that this study provided only a preliminary assessment of Earth’s potential sensitivity to the unique character of rocket BC emissions. The model did not consider alumina emissions, which could conceivably have a larger impact than BC, reflecting sunlight back to space. And the results have not been confirmed with more sophisticated models.

A new source of stratospheric particles may soon add to these increasing rocket emissions. Geoengineering is a set of plans to mitigate GHG climate forcing. One type of plan envisions the continual release of carefully chosen particles into the stratosphere to reduce incoming solar radiation, just as rocket particles do today, though on a much larger scale. Scientists and policy makers struggle to envision a suitable and effective international governance framework to address such purposeful injection of particles into the stratosphere; the National Academy of Sciences convened a special study on the topic [MacMartin and Kravitz, 2019].

Space launches are not, by any means, linked to geoengineering, and the two are very different in terms of benefits, risks, costs, and ethics. Still, the significant scientific efforts underway to understand theoretical geoengineering particle releases, while actual rocket particle releases continue without much scientific attention, raise new questions. How could geoengineering be monitored and regulated in the presence of escalating rocket launch particle injections? Could studies of rocket plumes inform geoengineering efforts with needed information on the behavior of particles in the stratosphere? Current efforts to assess the background state of stratospheric particles should account for space activities including particle production during launches and reentry “burnup.”

The obvious example is the continued scrutiny of the global impacts of emissions of supersonic transport fleets [e.g., Ingenito, 2018]. Such aircraft have not flown in 2 decades and are unlikely to reappear in the coming decade, despite multiple efforts to address efficiency, noise, and safety. Meanwhile, despite the coming surge in launches, similar questions are not being asked about rocket emissions.

A recent policy analysis [Ross and Vedda, 2018] showed that the most advantageous course of action for addressing launch emissions is to gather data before a tipping point is encountered. Tipping points produce unforeseeable changes in perception, arrive suddenly, and disrupt the status quo by emphasizing uncertainties. A policy that raises the appropriate scientific questions and provides resources to investigate them would place the launch industry on a path to avoid a potentially disruptive tipping point.

A suitable first step on this path would be to convene a rocket emissions advisory panel that would include representatives from the industrial, scientific, and governance communities. This panel would determine the scope of the concern, identify additional actors and stakeholders, define early metrics, and uncover key knowledge gaps. Importantly, the panel would help build a foundation for future cooperative studies of the relative importance of rocket emissions to other processes and help to ensure that future research programs are in proportion to the significance of the impacts being studied.

AGU could play a precipitating role with a statement of science policy regarding the scientific implications of a rapidly growing space industry. A Chapman Conference could possibly serve as a means to assemble an initial rocket emissions advisory panel.

The sooner that reliable and verifiable information can be compiled and assessed, the sooner effective strategies can be defined to reduce risks and limit exposure of the space industry to entanglement with geoengineering experiments and regulations that are not well aligned with long-standing space launch practices and traditions. Adoption of a long view with regard to emissions has well served the ambitious growth goals of the aviation industry. Such a view would do the same for the space industry.

Raumfahrt - The Coming Surge of Rocket Emissions With the space industry’s rapid growth, rocket exhaust will increasingly accumulate in the atmosphere. How this accumulation might affect the planet
1238 Views
Created with page4