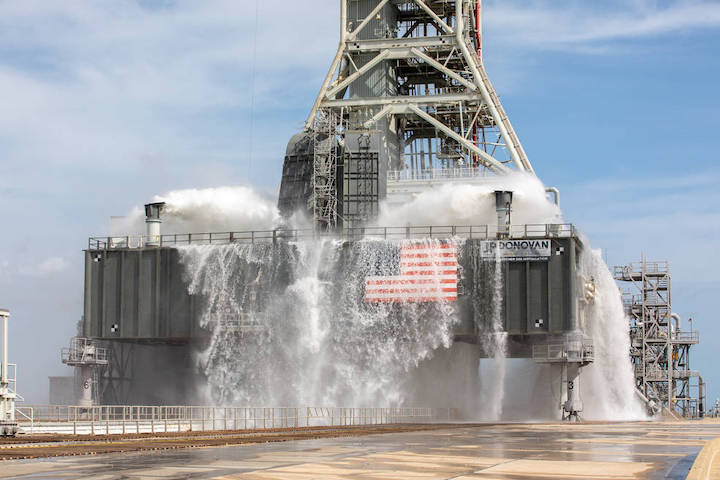 NASA continued its preparation for the Artemis I mission with a successful water flow test on the mobile launcher at Kennedy Space Center's Pad 39B on Friday, Sept. 13.
Credits: NASA/Kim Shiflett 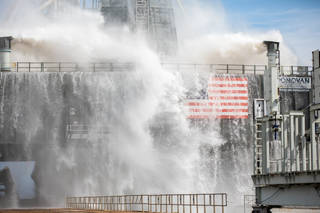 About 450,000 gallons of water poured onto the Pad B flame deflector, the mobile launcher flame hole and onto the launcher’s blast deck during NASA's water flow test.
Credits: NASA/Frank Michaux

NASA eclipsed another milestone in its plan to send the first woman and next man to the lunar surface by 2024 with the latest successful water flow test on the mobile launcher at Kennedy Space Center’s Pad 39B.

Using adjustments from the first water flow test event in July, the Friday, Sept. 13 exercise demonstrated the capability of the sound suppression system that will be used for launch of NASA’s Space Launch System (SLS) for the Artemis I mission.

During the 30-second test, about 450,000 gallons of water poured onto the Pad B flame deflector, the mobile launcher flame hole and onto the launcher’s blast deck. The system reached a peak flow rate of more than 1 million gallons per minute. While the visual is dramatic, the water’s main purpose come launch day involves sound.

“SLS will create about 176 decibels at liftoff, which is significantly louder than a jetliner,” said Launchpad Element Deputy Project Manager Nick Moss. “The sheets of water created by the flow will curb that sound by knocking it down a few decibels.”

When the rocket’s engines ramp up to full power, the hot exhaust starts to push harder in the confined space of the mobile launcher. These pressure waves can cause vibrations that could potentially damage the mobile launcher, as well as the rocket about to take flight.

The sound suppression system starts flowing about 20 seconds before T-Zero. Smoke and fire from the vehicle starts about 10 seconds later.

“And that’s what we’re all here for — making sure that we can get to those last 10 seconds safely and get the vehicle going,” Moss said.

Friday’s test was the first time the ground launch sequencer software that will be used on launch day was used to command launch support systems at Pad B from the Launch Control Center. The weekend tests included a nominal launch countdown flow and a single valve failure test flow to better characterize off-nominal system performance.

The team is currently performing post-test analysis on these events in preparation for a final water flow test in the coming weeks, involving the hydrogen burn-off igniters.