It looks like Jupiter got slammed again! A bright flash from a possible impact lit up the planet's South Equatorial Belt Tuesday night.

This video of the impact flash was compiled from raw images made with a Celestron C8 EdgeHD and ZWO ASI290MM camera. The impact flash appears at far left within the southern edge of the SEB. The Great Red Spot is visible at right. North is up.
Ethan Chappel

As Texas amateur astronomer Ethan Chappel looked up at the sky for Perseid meteors on Tuesday night (August 6th), little did he know his Celestron 8 telescope was capturing the possible impact of a much larger "meteor" at Jupiter. After running the camera data through a program designed to alert the user to just such transient events, Chappel spotted a flash of light in the planet's South Equatorial Belt (SEB). It expanded from a pinpoint to a small dot before fading away — telltale signs of a possible impact based on previous events observed at Jupiter. 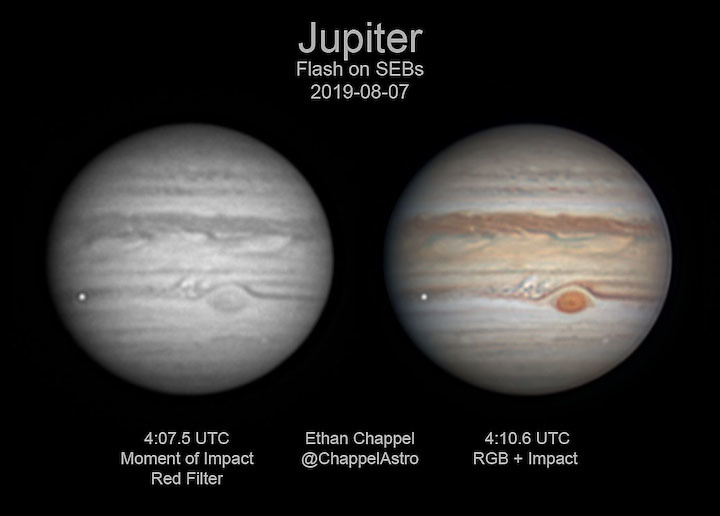 Processed black-and-white and color images of Jupiter taken at the moment of the possible impact in the SEB. The flash appeared at 4:07.5 UT on August 7, 2019.
Ethan Chappel

The flash appeared just inside the southern edge of the SEB on the same face of the planet as the Great Red Spot, at a longitude of 21.8° (System II) / 298.4° (System I) and latitude –19.6°. Due to prevailing winds, any possible dark scar left in the wake of the impact will be slowly drifting westward, increasing in longitude by approximately 3.9° (System II) per day. The flash lasted between 0.88 and 1.55 seconds. Chappel favors the longer time frame.

Another image processed to show the impact flash.
Ethan Chappel

When I learned of the news yesterday evening, I immediately set up my 10-inch Dob for a look, but I was unable to make out any dark scar such as those left in the wake of previous Jupiter strikes. Several other observers with better skies and much better cameras have similarly recorded nothing obvious at the site since the impact, but that could change. That's why it would be wise for all amateurs to monitor the site to look for an impact scar or changes in Jovian cloud patterns.

To determine what longitude is crossing Jupiter's central meridian (CM) at any moment from your observing site, head over the Arkansas Sky Observatory and input your time in Universal Time.

To get you started, here are a few UT times when the impact site will cross Jupiter's CM, courtesy of Marc Delcroix. They take the site's drift into account. Because of Jupiter's fast rotation, the site rolls into view at least twice a day, hence the two (or three) times shown for each date. System II longitudes are shown in parentheses:

If confirmed this would be the 7th recorded impact at the solar system's biggest planet since July 1994, when 21 fragments of Comet Shoemaker-Levy 9 slammed into the planet in succession to create a rosary of dark impact boils visible in amateur telescopes. That event remains the single most impressive astronomical sight of my life. Additional crashes by either asteroids or comets were observed in 2009, 2010 (two events), 2016, and 2017.

Chappel used a program called DeTeCt created by Marc Delcroix specifically to look for impact flashes. You can download a copy on his page where you'll quickly see that manyamateurs are monitoring both Jupiter and Saturn for transient events. Become one of them and you may be the next to spy a comet end its life in a flash. Find more information about the discovery at the Impact on Jupiter forum on Cloudynights.