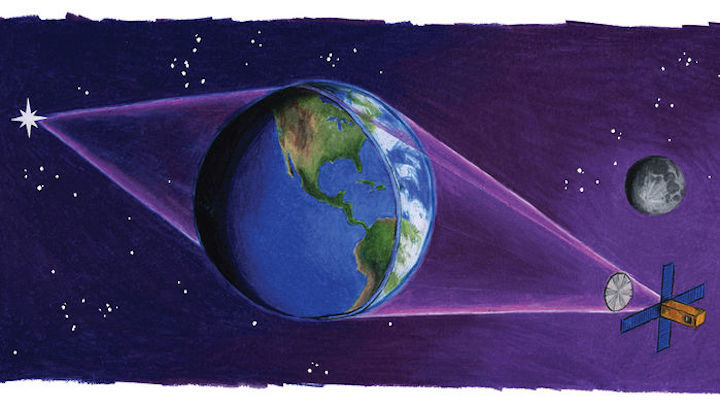 A space telescope beyond the moon could use Earth’s atmosphere as a lens to magnify the light of distant objects by 22,500 times.

When it is finished sometime next decade, Europe’s Extremely Large Telescope will be the largest in the world, with a mirror nearly 40 meters across. But one astronomer has proposed an even more powerful space telescope—one with the equivalent of a 150-meter mirror—that would use Earth’s atmosphere itself as a natural lens to gather and focus light. Astronomer David Kipping of Columbia University has worked out that a 1-meter space telescope, positioned beyond the moon, could use the focusing power of the ring of atmosphere seen around the edge of the planet to amplify the brightness of dim objects by tens of thousands of times.

The atmosphere is too variable for a Terrascope, as Kipping calls it, to produce beautiful images to rival those from the Hubble Space Telescope. But it could discover much fainter objects than is now possible, including small exoplanets or Earth-threatening asteroids. Kipping acknowledges that more work is needed to prove the idea, but the necessary technology already exists. “None of this is reinventing the wheel, it just needs to be pushed a bit harder,” he says.

Astronomers who read the paper Kipping posted last week on arXiv were both delighted and cautious. Matt Kenworthy, of Leiden University in the Netherlands, says he was “blown away by how much work and thought he had put into it” but wants more evidence that it will work. “I’d want to sit down and do a more realistic model,” he says. Bruce Macintosh of Stanford University in Palo Alto, California, adds: “It’s an interesting thought experiment, but there are a lot of details to think through.”

Kipping is well known for leading searches for moons in other planetary systems and he revealed a strong contender for the first exomoon last year. He says the germ of the Terrascope idea came 13 years ago when he was studying a rare atmospheric phenomenon called the green flash, which appears just as the sun sets below the horizon, when refraction and scattering in the atmosphere work together to momentarily select green from the sun’s light. He realized that, from the right vantage in space, you might see an entire green ring, when the sun passed behind Earth and its light was refracted by the ring of air around the planet’s circumference.

Kipping was also inspired by the idea that the sun itself could be used as a lens, with its gravity focusing light toward a space-based detector. Such a solar lens would magnify light 1 million billion times, potentially bringing the surfaces of exoplanets into view. The idea led to the Fast Outgoing Cyclopean Astronomical Lens mission, proposed to the European Space Agency in 1993. But it never gained traction because the detector would have to be positioned 550 times the Earth-sun distance out in space, nearly 20 times farther away than Neptune—a distance that would require a century for a spacecraft to reach.

But Terrascope could be much closer to home, Kipping says. He calculated that surface-skimming light from an object directly behind Earth is deflected to a focus 85% of the distance out to the moon. Light reaching that focal point is likely to encounter clouds and a lot of turbulence as it passes through the lower atmosphere. But move the detector 1.5 million kilometers away, to a focus four times farther than the moon, and it would sample light that has passed through the much calmer and cloud-free stratosphere at an altitude of 13.7 kilometers.

A 1-meter telescope at that distance, observing for a whole night, would see an object boosted to 22,500 times its original brightness, he calculates—the equivalent of using a 150-meter telescope. The Terrascope’s powerful amplification means it would excel in detecting very faint objects or discerning very slight changes in brightness, Kipping says, enabling it to scan the sky for very small and dim asteroids or measure the tiny dips in brightness as small exoplanets pass in front of bright stars.

To avoid being dazzled by the bright disk of Earth, the telescope would need a mask, known as a coronagraph, to block it out. Kipping also says he has yet to consider the impact of “airglow,” a dim light emitted in the upper atmosphere by luminescence and other processes. But he notes that the glow could conceivably be removed with filters or digitally, taking advantage of the fact that it is steady while objects of interest are constantly changing. The Terrascope concept could be tested, he says, with a cheap toaster-size CubeSat mission.

Kenworthy says the atmosphere’s variability might seriously degrade Terrascope’s image quality. To assess the impact, he says, “The next step would be ray tracing with a realistic Earth atmosphere model,” he says. Ideally, the giant lens should focus light to a spot. “In reality, you’ll probably get a pattern of blobs.”

Macintosh agrees. “Earth’s atmosphere is a pretty nonideal lens so it produces very blurry images,” he says. But it may find a role studying brightness changes in very faint objects, exploiting its role as a huge magnifying “light bucket.”

If nothing else, Kipping has got astronomers talking about the idea. “I wouldn’t launch a satellite on this paper alone,” Kenworthy says. “But it’s an excellent first step.”