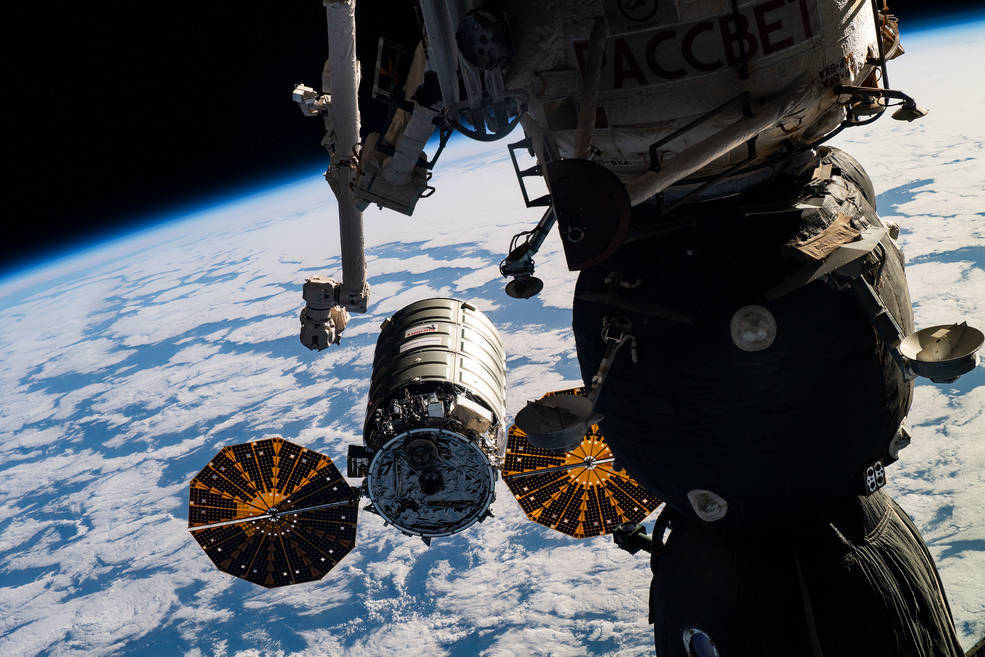 The Canadarm2 robotic arm is positioned to grapple the Northrop Grumman Cygnus cargo craft as it approaches its capture point with the International Space Station orbiting 255 miles above the Atlantic Ocean. Highlighting the foreground is the Soyuz MS-12 crew ship docked to the Rassvet module.
Credits: NASA

Live coverage of the craft’s release will air on NASA Television and the agency’s website beginning at noon EDT, with release scheduled for 12:15 p.m.

Expedition 60 Flight Engineers Nick Hague and Christina Koch of NASA will use the station’s Canadarm2 robotic arm to release Cygnus after ground controllers remotely unbolt the craft from the Earth-facing port of the Unity module and maneuver it into release position.

Within 24 hours of its release, Cygnus will begin its secondary mission, deploying a series of CubeSats. Once at a safe distance away from station, two deployment systems – one provided by NanoRacks and the other by Hypergiant SEOPS (Satellite, Extraterrestrial Operations and Procedures) – will begin deploying the small satellites. After about a month of free-flight operations, NASA’s Seeker Robotic External CubeSat Inspection Vehicle will be deployed and operations will begin to demonstrate its ability to maneuver around Cygnus and take high-resolution photos. Seeker will transmit those images to its Kenobi receiver inside Cygnus for storage and transmission to the ground at a later date.

Cygnus also will demonstrate a Control Moment Gyroscope attitude control system and perform operations for the UbiquitiLink payload during the secondary mission. Cygnus will remain in orbit until later this year to demonstrate Northrop Grumman’s ability to fly two Cygnus spacecraft simultaneously and support payloads on the cargo craft for extended durations.